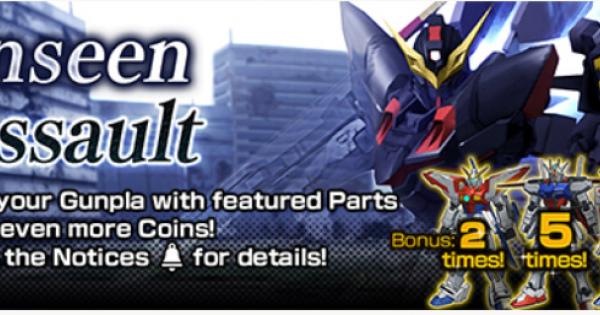 There's a new event coming to Gundam Battle Gunpla Warfare and we've got the details from the in game notifications as well as some speculation to boot.

But before we get into that, let's chat briefly about the free to play (or maybe not so free to play) nature of GBGW so far.

If the server issues can tell us anything, it's that Bandai and co were not expecting the kind of traffic for Gundam Battle Gunpla Warfare that they got, and especially not so quickly. And in all honesty, this may be a good sign for the game. Normally, a free to play game is earning money by paying players, and usually those price points for what things cost are set with the assumption (early on) that there are less people playing (and paying) in the beginning of the game and it grows from there. But a lot of dev hours are spent early in a game, and mobile games have a tendency to flash and burn out on occasion, so it seems like lots of companies slow early progression (unless you pay) as a way to help overcome this initial cost.

It pushes people to pay early for what they may get for free later. After all, you have fewer users at release than you do later on (if the game is working right), so making things more expensive earlier for fewer people can help stimulate some income fast.

Right or not, it's generally what we see in free to play mobile games. But the flip side is this: there was obviously a plan in place for how the game would be rolled out. For some companies, this plan extends out for 2-3 years. For others, it's short (a few months of new content planned at a time). But I've never heard of a mobile game adapting in 11 days to the changing needs of the community - and if GBGW did get far more users than anticipated, that likely means the plan (including how they monetize the app) is changing as we speak.

It just may take a few months to implement. And while implementing a new pricepoint for everything may seem logical, it wouldn't provide the kind of data they need until they've had some time to see what is purchased now.

So I'd say let's give them time to work on it and see what comes next.

Now, let's dive into what we know and what we're waiting to find out.

Like the Rising Arrow event, we expect Unseen Assault to have 3 levels of difficulty (likely costing 15 EN, 30 EN, and 45 EN for Normal, Hard, and Very Hard) and hopefully they also will have around the same difficulty. Rising Arrow had CPWR's of 5,000, 10,000, and 15,000 - making it easier than the hardest difficulty of daily missions, but we'll see when it releases if it follows the same blueprint.

We're expecting that once again we'll see some purple awakening circuits, so those who did end up getting the two that were available from Rising Arrow will be able to awaken their first piece of 4s gear to 5s.

That means, if you haven't yet spent those Bullseye Coins - be sure to pick up at least one piece of gear from the coin exchange (Rising Gundam piece) to get the multiplier for the next event.

Again, if you haven't spent Bullseye Coins from the last event, your last chance to do that will be 8/15 (after the new event begins, but still...) 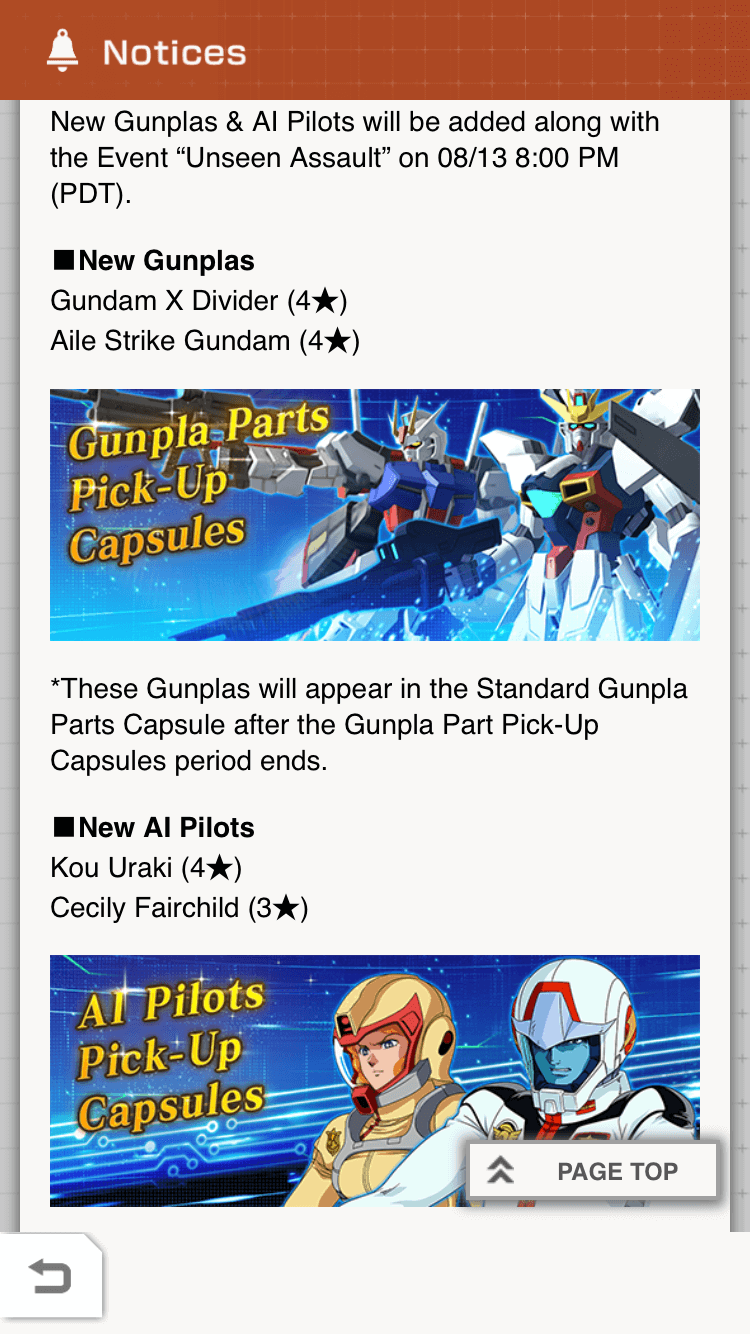 The new Gunpla and Pilots under this next week-long (likely) banner are going to be the 4 star Gundam X Divider and the 4 star Aile Strike Gundam. For pilots, we're getting Kou Uraki (4 Star) and Cecily Fairchild (3 Star).

While we don't know much about either set or the pilots (it's not like they release stats) we can hope the shield on the Gundam X Divider is as cool as it is in the series. Having a shield that can shoot (satellite cannon style) would be pretty cool. We can also hope a 4 star defender is coming soon (maybe Kou will be it), because having a chance to roll a 4s defender would be pretty excellent -- though we'd need some defender gear to go with it.

But the general consensus on "should I roll" or "should I wait" is to wait on the banner unless you really really love that particular set. Remember, besides the Nu Ver Ka set we saw in the first week, anything we see now will be put into the main pool after the banner week expires -- meaning you can still draw it with your one daily free roll or with a 10x roll (if you want to burn Haro Coins) pretty much at any time.

We're 11 days into a pretty cool Gundam game, and we're excited to see how it continues to change and evolve.

We hope Bandai makes changes to make the game a little more free to play friendly, and that they open up arena again soon, but in the meantime we'll wait patiently and keep being optimistic!