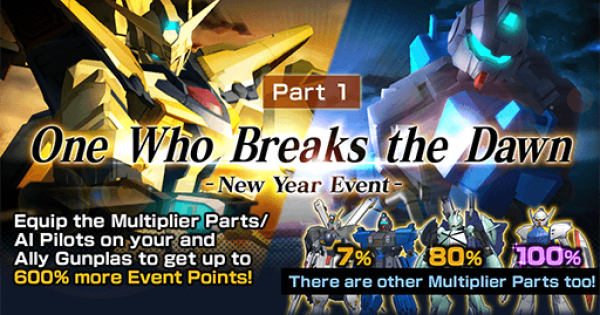 This week we have a special event, bringing us two suits and lasting two weeks. We don't know the details of Part 2 of the event yet, but Part 1 is quite interesting. This points event gets us the Blue Destiny Unit 1, while also dropping Akatsuki coins, which can be traded in for tickets, which can be used to pull on the new Akatsuki banner. This banner guarantees us an Akatsuki part on every pull, and the Akatsuki is a 4* suit, which makes it the first event 4*, not counting the F91 which still isn't a guaranteed pull anywhere. So without further ado, let's get into it.

Average stats across the board, Close Combat and For Desert word tags, and a great Awakening EX Skill. It's about time we get an Awakening that can compete with Buff EX Skills. The EXAM System will boost Speed by 20% and Melee ATK by 39%, putting this skill on par with Combat Stance and Offense Up from older heads like the Tallgeese II, Mobile SUMO and Age-1 Normal. The only reason this part doesn't get an S rating is because of Buffs and Awakening Skills no longer having use in Arena, from the Battle Assessment changes. Grab this as a 5* piece and max out the EX Skill, it's good for general use on Melee suits and may one day be useful in Arena again.

Above average defenses, average ATK, Close Combat and For Desert word tags, and a filler EX Skill. Still, a B Damage Shot Skill on a 6 second initial CD isn't bad if you really don't have anything better.

Average stats all around, Close Combat and Federation word tags, an a low impact trait that reduces Melee damage taken by 20 while you are below 80% Armor. This can safely be skipped.

Average stats all around, Close Combat and Federation word tags, and a filler EX skill for melee. B+ Damage on a 6 second initial CD, but like most melee Leg EX Skills, it is very short range and easy for the enemy to be pushed out of the attack. You can probably skip these unless you are desperate for Close Combat legs.

Low Armor, high defenses, Close Combat and For Desert word tags, and a trait that boosts Buff EX Skill Time by 15%. Most fights don't last anywhere near long enough for this effect to be very useful, especially given that most Buffs last as long as their CD or longer when maxed out, but for something like the EXAM Awakening on the Head here, it can be nice to have. Not something I would invest in.

Interestingly enough, this suit doesn't come with a backpack, leaving us with only five total parts. Still, we also get the Akatsuki, so I'm not too fussed. Speaking of, let's review that, shall we?

One thing to note before we start, is that as the Akatsuki is not a traditional event suit, the EX Skills and Traits will most likely not be maxed out by anyone short of whales, so I will treat them as if their level 1 Skill/Trait is the maximum for the purposes of this review.

Average defenses, Average Melee ATK, low Shot ATK, Gundam Type and For Base word tags, and a Vulcan EX Skill pretending to be something different by not using the word Vulcans. It's a shame this part is bad, because it is a very nice looking head.

High Armor, average stats otherwise, Gundam Type and For Base word tags and an Awakening EX Skill that raises Beam Resist by 100% and makes your suit resist flinching. This Torso is very nice for Defenders, boasting very high Armor, a word tag that boosts Armor, and a strong defensive Awakening. Keep in mind, however, that despite the flavor text of "repel beams" and boosting Beam Resist by 100%, you don't actually become immune to Beam weapons. It doubles the numerical value of your Beam Resist stat on your suit. This is a huge boost and likely will make Beams not do much damage if at all, but it is possible to be hit by Beam attacks that still overwhelm your Resist regardless.

Above average defenses, low ATK stats, Gundam Type and For Base word tags, and a trait that boosts Sp Shot Power by 17% when attacking with Beam. This trait is awful, as are these arms.

Above average Armor, average everything else, Gundam Type and For Tundra word tags, and another Melee Leg EX Skill. Just like I wrote for the Blue Destiny Legs, the skill is likely not very good. Still, these legs could be decent on a Defender, with high Armor and Gundam Type.

Essentially the same stats as the legs, trading some Shot DEF for Melee DEF. Gundam Type and For Tundra word tags, and a Pierce based Shot Skill that looks amazing but isn't actually very good. This is a fantastic piece aesthetically but it's pretty meh otherwise. Like the Legs, good for Defenders, otherwise not much to see here.

Why is it a Twin Beam Saber if they only give us half of it? Who knows. Anyways, high Armor and defenses, low Melee ATK, Gundam Type and High Mobility word tags, and a trait that boosts Middle-Shooter's Job Gauge by 6%. Low value trait, and not good for Melee units, but Defenders and Shooters might like this for the defenses.

High Armor and defenses, low Shot ATK, Gundam Type and For Base word tags, and an amazing trait of boosting Initial EX Skill Charge by 6%, unconditionally. This is very nice for Defenders, and good for Melee units too who want the CD reduction more than the word tags in this slot. This part would be S rating if it was a normal event part and could be easily maxed out, but since it can't and likely will be stuck at 6% CD for a long time, it only gets a B+.

High Armor, low Melee DEF and Physical RES, high Shot DEF and Beam RES, Gundam Type and High Mobility word tags, and a trait that reduces enemy shooting power by 17% when you have a Rifle equipped. This is a solid Shield for Defenders, and anyone who wants to really be protected from ranged attacks, while not minding being very soft to melee attacks.

Neo is a Middle Shooter pilot with solid ATK stats, average defenses, Commander and For Space word tags, and a trait that gives you a 5% chance to survive a fatal blow when using a Speed suit. The trait is low value, being something nice to have but not really anything good. Having high dual ATK stats is nice but hindered a bit by the Middle-Shooter job. Outfighter is the job for dual attacking suits, given AI behaviour. That being said, a middle shooter with 1181 Shot ATK is still good, not the best, but serviceable.

Well, the Akatsuki isn't amazing, but man does it look good. Still, there are some decent parts here, and unlike the F91, you are guaranteed to get parts instead of getting nippers, so that's a thing. Depending on what happens for Part 2 of the event, I might not have an article next week, but we'll see what happens. Until then, see you next time!