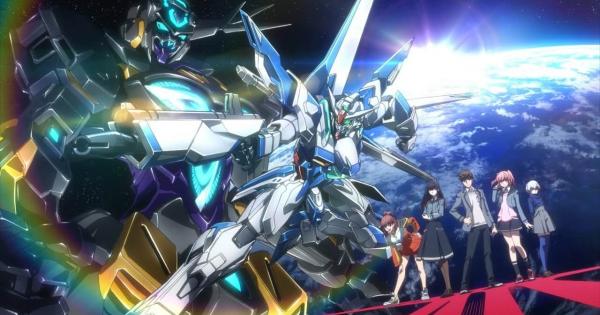 Welcome back, all of you glorious Gunpla Pilots!  I hope you enjoyed the first Part, because we're steam-rolling right on through to Part 2.  Consider this something to whet your appetite while you wait for the bigger Part 3, that'll go over Hi-nu HWS, Enhanced ZZ Gundam, Zeta Gundam, and the inglorious Qubeley.

This segment is restricted to two suits, both of which being excluded from the Step-Up Banners, as they're the current Sokai suits running.

Realistically, most of this banner is "more of the same", with Sokai-level parts.  Usually, no matter what you get, you're going to see something above-average.  It's what stands out among those selections that we care about.

I want to be extra clear that we're not saying definitively that these are the best Parts, and that these are based mostly on my own observation and opinion, compounded by other theory-crafters that love this game.

**I am in no way telling anyone that they should or should not pay for premium currency in order to pull on Banners.  This is an informative overview of a Part's stand-out effectiveness or viability, and is based on observational data.**

TURN A GUNDAM AND TURN X

To be fair, I had a lot of trouble really digging into what makes any of these Parts stand out with Turn A Gundam.  There just wasn't a great deal of oomph or uniqueness, and it felt like a rehash of several other Sokai parts, or similar.

Having said that, the Parts we will be listing are definitely carrying their own share of uniqueness or power that makes them shine among others.

HEAD - We're gonna kick this honorable mention out of the way right now.  This is almost identical to Freedom Head, and because of that it gets the nod, due to the higher-tier of melee attack as well as the added perk of a Protag Word Tag.  The Part Trait is really niche, and very underwhelming, so it won't come up in much conversation or be notable in general play.

Bonus points for daring to dream with that mustache, bruh.

CHEST - Okay, now here is exactly what we want.  Stats are a little wonky, but can fill both the slots of a solid melee chest with that 969 melee attack, and it has serviceable shot stats with 553.  Even the defensive stats roll in at fair numbers (with a solid 1738 shot defense). That EX Skill, though... that's some juice.  It may not be a Power A attack, but this is a very rare B Pierce B+ Power shot attack EX Skill with a dash animation similar to Power A.  B+ Power is more than enough to get the job done with appropriate stats, and this EX Skill can spell a swift death sentence.

There isn't enough of a selection of powerful shot-based EX Skills (only 3 Power A at all), so this is something you're going to want to hang onto for sure.

BEAM RIFLE - Yikes.  Most people are going to take one glance at the shot attack values and toss this baby in the bin.  Me?  I'm gonna tuck it away for safe keeping.  2138 is a garbage value when considering guns for any sort of shooter, but this packs heap of pain on a melee suit (much like DODS Rifle - garbage stats; powerful trait).   Because Sokai Parts lean into high stat distributions overall, the lower shot stats translate to even higher gains in the "circumstantial defense" department as an added bonus.

This Trait moves us away from those "initial EX Skill cooldown charge boosts" and drives us more toward straight passive damage buffs; 17% added EX Skill power simply for being an Out-Fighter is massive gains that affect both shot and melee-based skills.  Out-Fighters get some massive flexibility in most of their license-specific Traits either only require they use their License, or simply exist at all.  This is a keeper, and you better recognize!

GUNDAM HAMMER - People are going to tell me "But Mika!  Gundam Hammer only has 3,698 melee attack, how can it be that good?!" and I'll tell them they're right about that it has 3,698, and that it is that good.  Realistically, though, this is a one-of-a-kind weapon (we have one other; it's Heat Rod from Gouf Custom and it's terrible) with an EX Skill that doesn't quit, and a weapon doesn't need to absolutely require 4,000 attack or be bad.

Not only does this weapon have an above-average melee attack of 3,698, it has a cool 969 shot defense and an extremely fast attack animation that hits in wide, flowing sweeps.  To be on the receiving end of this weapon in the hands of an In-Fighter in Arena is one of the most unpleasant experiences you can think of if you're not ready for it, and the EX Skill comes out fast and often, especially if there are cooldown reduction traits involved.

Do not count this ball-and-chain out.

All-in-all, the look of Turn X is extremely difficult to make work with most builds, and the Head looks absolutely horrific in some cases, while the Chest looks like a busted dinner plate in the best cases.  Those arms, though, can carry me into the sweet release of death, and the back gets double points in looks for turtle memes.

You can't ignore some of these Parts, though, in sheer effectiveness and ability.  I was happily surprised with how amazing some of these EX Skills performed, and it's nice to see a non-protag build get some beast options.  With the addition of Close Combat on almost every Part of the suit, it really can synergize well in lots of cases, too.

HEAD - While looking like a beetle, this Head is unreal good.  With most melee units, the Head Part is about as negligible as the Chest and usually carries a lot of filler qualities, but with Close Combat, 553 melee attack, and a 17% EX Skill Power boost for being Power Attribute, you can bet this is going to be used quite a bit. Really it ends up being one of the more valuable and versatile heads because it is so directly beneficial for melee as a general whole.

Defenses are a bit more rounded here, and Shot Attack is in the average to above-average realm, but it can definitely fit a niche with a shooter there.

CHEST - And just like that, both Moonbeam Butterfly Parts make the list. But really, this Chest Part is absolutely terrific with 965 melee and shot attack, Close Combat for all you melee nerds, and an incredible shot-based Beam EX Skill, you're looking at quality.

Unlike the Turn A EX Skill, this one lacks a dash animation but makes up for it in an absolutely overwhelming AOE attack that is so huge, it's hard to tell how far/wide it hits when using it on your main suit.  Really, it's nuts, and I haven't had many experiences where I believed any enemy could have or would have dodged the attack.  The even defenses at the same number are a bonus, and a common theme with Turn X Parts.

ARMS - Here she is, boys!  2,922 melee attack, 1,356 shot attack, and a Power A EX Skill with Close Combat.  YOWZA.  Understandably, at first glance this looks just like Unicorn with different Tags, even complete with a Beam Melee Power A EX Skill.  Okay, fair call.

This Power A is a little different than Unicorn's, in that it will raise your squad's melee attack rather than their shot attack, and by 30% before the attack lands.  On top of that, where Unicorn's Beam Tonfa attack applies a unique texture, which overrides other buffs, Fusion Destruction Manipulator does not, and will stack with other buffs to maximize damage output.

The animation is super satisfying as well, when you drive a massive beam saber through your opponent.

Thanks for checking out Part 2 of the Sokai Special Part Spotlight!  Part 3 will hit the ground running on Saturday!

Be sure to check out our GBGW Discord Server - NEWTYPE LABS!  We've got a contest running for the month where you design your best looking gunpla with the theme of "New Beginnings and Big Ends! Build a gunpla celebrating our wonderful decade or the closure of it, and whatever that means to you!"

Submissions run from January 1st to January 15th, and all you need to do is design your gunpla, fill out the Google form located in our #Event-Announcements Channel, and you're in!  The Prize is a 10 dollar gift card for Android or IOS, as well as top 3 will receive invites for an upcoming competition for even greater prizes!