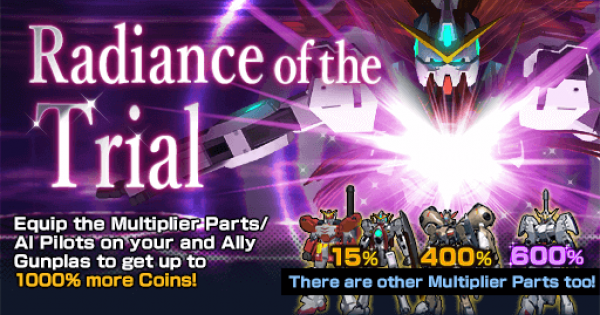 Today I'll be reviewing the Gundam Nadleeh parts from the Radiance of the Trial event. This week's event Gunpla comes with a full suite of parts, including weapons and a shield. So let's jump right in.

The Head has some average stats for a 3* part all around. The trait, when maxed out, boosts your Shooting Crit Chance by 17% when using a Middle-Shooter Pilot. It's not a bad trait per se, but it is a low impact one, as that 17% Crit Chance equals out to an average damage increase of 1.7% on your regular attacks. It comes with the For Space and For Computers word tags, which are both rather weak. Would I invest in this part? No, this is a rather lackluster part.

The Torso is the only part of the suit that has an EX Skill. Stat wise, it comes with above average defenses, average offenses, and average Armor. It too, has the For Space and For Computer word tags. The EX Skill, the Trial System, is effectively identical to the Rozen Zulu Back skill or the Rose Gundam 1* Arms skill. It is a very short range AoE stun. The main difference here is that the other stuns we have access to are ranged and targetted, while this is a small area around the Gunpla using it. Would I invest in this part? This part could be handy on a Defender Gunpla with the Hate Up EX Skill from the Gundam Mk II legs, in that it can lure multiple opponents close and then stun them all. Whether that tactic would be effective or not is unknown, but it could be interesting to try out. This is one of those parts I would probably grab copies of but not immediately invest into, keeping it on the backburner for times when you have spare circuits lying around.

The Arms of the Nadleeh are a very interesting part. We once again have the bad word tags of For Space and For Computer, with mostly average stats across the board. The Melee ATK is middle of the pack for 3* parts, but don't let that fool you, these Arms are very good for Melee suits. It's all thanks to the trait, that boosts your Melee Power by 25% when using a Speed Attribute Gunpla. These Arms are effectively budget versions of the Barbatos and Code Phi arms. Assuming the trait is active, these are better than most 4* Arms for Melee ATK, including things like the the Exia, Justice and Tallgeese Arms. These are absolutely worth investing into if you do not have the Barbatos Arms already, or do not plan to farm for the Code Phi Arms.

The Legs have average stats across the board. These come with the usual For Space word tag, but also the Gundam Type word tag, which is the best defensive tag that exists. The trait is a weird one. It reduces your Shot Spread by 15% when your Armor is above 40%. For Rifles I don't think this does anything, it's mostly a trait for Bazookas. Still, Shot Spread is an effect that is very rare and hasn't been too thoroughly tested. Quite frankly, it seems low value, and the rest of the part has no standouts, so I wouldn't invest in these.

The Back has average stats across the board, the For Space and Gundam Type word tags, but where it really shines is the trait. It's trait boosts Shooting Power by 25% when using a Speed Attribute Gunpla. This back might just be the best Shot ATK back that exists right now. We've seen similar traits in the past, by they were limited to the enemy having specific word tags, meaning we couldn't control for certain when the trait would work. Here, we do have control, which easily pushes this piece much higher than it's average stats would indicate. Like the Arms, this piece should absolutely be invested into, but unlike the Arms, which is a budget version of a better part, this piece might change what the theoretical best Shot ATK build is.

The GN Beam Saber (Nadleeh) has rather low stats even for a 3* part. It comes with For Space and For Computer word tags. The trait reduces Enemy Melee Power by 25% when using a Speed Attribute Gunpla, which is a solid defensive trait. Unfortunately, this part is rather underwhelming and not worth investing into.

The GN Beam Rifle (Nadleeh) is yet another middle of the road part, with average stats across the board. It comes with the For Space and For Computer word tags, and the trait boosts Shot Damage by a flat 20 when using a Middle-Shooter Pilot. It has a low impact trait, average stats and bad word tags. Don't bother investing into this.

The final piece of the Nadleeh, the Shield, has above average stats. In fact, it's tied with the Strike Rouge Anti-Beam Shield for best 3* shield in terms of stats. Once again, this piece comes with the For Space and For Computers word tags. The trait increases Debuff EX Skill time by 16% while using a Middle-Shooter Pilot, which is interesting, if a little hard to take advantage of, given the rarity of Debuff skills. Debuffs are also weaker than Buff skills, on average as well, and that hurts this part further. However, if you are lacking a decent 4* shield, this might be worth picking up a single copy just for the stats alone.