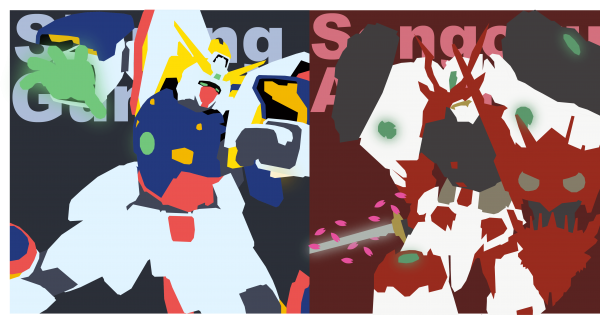 Sengoku Astray and Shining Gundam - Should You Pull?

Today we've got another addition of Should You Pull, brought to you by AetherRose on our discord server. Check out my assessment of this week's banner below!

Finally, Shining Gundam breaks into the game and will no doubt show us a magnificent EX Skill. Or I’m locking myself in a closet until they fix it. You know, whichever! I can’t wait to find out if I’m eating bugs or beaming with joy!

An EX Skill with D/B at 21/6 CD means it has a D in Power, B in Piercing, a 21 second cooldown, and it’s available for use 6 seconds after the match starts.

To be frank with you, the odds of drawing a good Part is low and to top it off, the Parts that are good aren’t exactly exceptional, meanwhile we have some below average parts that could really waste your HC. The only time I’d suggest pulling is if you really love one or both of these gunpla, and even then try to limit how much you spend.

We’re starting off pretty well with this Head. It’s nothing to die for, but it has above average Armor and a Part Trait with 28% EX Skill Piercing when you have In-Fighter as your Job. I don’t like the Word Tags, which are Heavy Armor and Gundam Type, but in spite of that, this Head is actually useful due to its Part Trait.

Again with beastly Armor at 1976, but this time paired with above average 796 M.Atk. This Part has the Trait “In-Fight Job: EX Skill CD reduced 20%”. This is, again, a really good EX Skill, especially for Arena. This comes with Heavy Armor again, but it’s brought up a little by Close Combat, which does raise M.Atk by 5%.

The Armor on these Arms are terrible, but look at that 2781 M.Atk! That is above average, although not the best. Honestly, I expected the Sengoku Astray to overpower Exia here, but I was obviously wrong. OR WAS I? To make up for the lower M.Atk, these Arms have a better EX Skill, which is D/A- at 21/6 CD. This is ridiculously fast for the damage, and to top it off it reduces Enemy M.Def by 19%. The weakness here is the Word Tags, which are Heavy Armor and Gundam type.

The Legs are exceptionally disappointing, with average stats across the board with an EX Skill which only works with Module weapons, and again with the terrible Word Tags.

Here we see average stats. The Armor is above average again, but this time it pays for it with well below average S.Def, which balances things out more or less. The selling point here is the EX Skill, which is on a mere 60/6 CD and puts out A+/C with a passive 39% S.Atk to the Squad, making it one of the better EX Skills in the game. I can really see this one shining, heh get it?, particularly well on a Defender and 2 Ranged team.

Average stats and below average Part Trait. The Armor is above average but not the best. The best bit here is it comes with Close Combat, which isn’t even that great either.

While it is a bulky set, which doesn’t work with as many parts as I’d like, it is a very cool looking bulky set, and I really appreciate that. It reminds me of a dragon and while katanas aren’t my aesthetic, they are a lot of people’s.

This Head comes with well above average armor, well below average stats, and a terrible Part Trait. Finally, it comes with Mobile Fighter and Close Combat, which are okay.

Yessss yes yes YES. These Arms are what I was waiting for! We’re looking at a very solid 2781 with probably the best offensive EX Skill in this game. B/A with 79/8 and it buffs Squad M.Atk by 19% and M.Def by 24%. The only downside are the Word Tags, but it’s not the worst in the world and having both the power and the prestige of Shining Finger makes it worthwhile. Go on Pilot. Crush them with your love, your anger, and all your sorrow

The Legs are very similar to another Part on this banner, with above average Armor and average stats aside. Additionally, it comes with an EX Skill with D/A- and 21/6 CD, very quick and hits hard. I like this Part a lot.

Again the above average Armor blesses us. If you add these Parts together, you really do get an absolute TON of Armor...but that’s not very useful, so moving on. The other stats are average and the Part Trait is okay, but nothing special, preventing recoil 20% of the time when you’re an In-Fighter.

Honestly Shining Gundam is very plain looking in spite of being the Hero of the People. The fact it’s plain looking means it pairs well with pretty much everything, though.

Neither Pilot stands out to me as anything special, hair aside, so I’m inclined to ignore both of these boyos until something better comes along.

Georgie boy is an absurdly defensive Out-Fighter with a funny name and silly hair. His Part Trait reduces EX Skill CD by 20% when you’re Technique, so he’s not bad but not good either.

Cola Sour Sure, nice name. His stats are low but his Part Trait boosts buff effects by 15% with Power attribute, which is pretty okay.