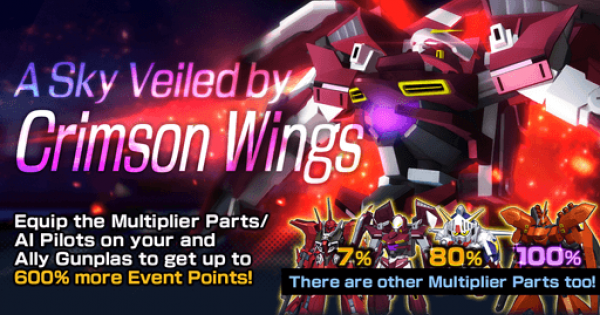 Hello Pilots! Another week, another event, and that means another suit for me to review! Well, more than one, as we got a surprise this week, in the form of Beginner's parts aimed at new players, that are reminiscent of some of the standard 4* parts. So without further ado, let's get into them

Average stats, Support Type and Gundam Type word tags, and a trait that boosts Mid Shot ATK by 14% while Speed Attribute. This is a pretty good head for a Supporter, assuming you aren't using the head slot for a healing EX. I'd grab a single copy for that purpose and then skip on the trait.

High Armor and Shot ATK, average everything else, this comes with Support Type and Gundam Type word tags, alongside a trait that reduces EX Skill Damage taken by a flat 35 when Support Type. The trait is worthless but the stats and tags are very nice for a Supporter, again. This can even work for a Shooter in a pinch, as 558 Shot ATK is no slouch in this slot. Grab a copy if it interests you, but don't bother with duplicates.

High Armor and Defenses, abysmally low Melee ATK, and serviceable 558 Shot ATK, this Arm + Shield combo comes with the Support Type and Gundam Type word tags alongside a Pierce based Magazine EX Skill. Once more, this is a good Supporter part that also doubles as an okay Shooter part. Grab a copy if that interests you, but like all the others, skip out on duplicates, the EX Skill isn't worth it.

Average stats all around, Support Type and For Urban Area word tags, and a trait that reduces EX Skill CD by 15% while using a Supporter job. These are fantastic Supporter legs, and mediocre for everything else. Grab them and max them out if you want to run a Supporter in your 3v3 squad, otherwise pass on these.

Same stats and tags as the legs, the only difference is this part has an EX Skill instead of a trait. The EX Skill is a Buff that boosts your allies' DEF stats by 19% and RES stats by 29%. A purely defensive buff, on mediocre stats and traits. Even for a Supporter, this falls really short. Skip this.

High Armor, low Melee ATK, Support Type and Gundam Type word tags, this saber comes with a trait that increases Melee Damage by a flat 20 when using a Supporter Pilot. Hard pass unless you really are looking for a high armor Gundam Type weapon.

Above average defenses and low ATK stats, Nena comes with the Support Type and Gundam Type word tags alongside a trait that boosts EX Skill Recovery by 16% when Speed attribute. Definitely grab her and max her out if you are looking for a healbot, the trait is very strong here. If you aren't looking for a healbot, pass on her.

The Throne Drei doesn't excite me at all, but I was surprised at how decent the parts were overall despite not really having any standouts. Next up, the Beginner Coin parts.

Since we have a whopping 50 parts here, I've decided to just narrow it down to the best picks of the bunch, both for your sake and my sanity.

For Melee, grab the Astray Red Frame, which comes with 389 Melee ATK, Protag and Close Combat, making it a great starting part for the slot. For Shooters, grab the Duel Gundam Assault Shroud, boosting a very nice 3043 Shot ATK alongside High Firepower and Mid-Range word tags. Both Heads have filler EX Skills and Traits.

For Melee, you want either the Astray Red Frame or the Gundam GP01FB. Astray 651 Melee ATK alongside Protag and Close Combat word tags, while GP01FB has 388 Melee ATK, High Firepower and High Mobility word tags, and Combat Stance Y, a very strong Buff EX Skill that boosts your entire team's Melee ATK by 30%. For Shooters, you want the Tallgeese EW, that gives 650 Shot ATK, High Mobility and Long-Range word tags, and a trait that boosts Shooting Power by 8% when High Mobility is active. Of special note here is the Duel Gundam Assault Shroud Torso, which bears consideration because of the EX Skill it has, Armed Aura B. This Buff makes it so your allies resist flinching.

For Melee, the options are Astray Red Frame or the Tallgeese EW. Tallgeese has the higher stats, at a whopping 3469 Melee ATK along Close Combat and High Mobility word tags, and is a combined Arm + Shield part. Astray Red Frame, however, has 2656 Melee ATK, Protag and Close Combat word tags, and Lightning Ball, a strong Melee EX Skill. The Astray Red Frame also doesn't come with a Shield attached to it. For Shooters, your options are the Tallgeese EW arms or the Virsago Arms. Tallgeese EW has the main points mentioned above, but in this case it's a whopping 1457 Shot ATK. Virsago arms, on the other hand, are not a combined part, have 735 Shot ATK, come with the Federation and High Firepower word tags, and have Strike Claw, a strong EX Skill for Shooters. Also of note is the Beginning 30 Gundam, whose EX Skill is a stun.

For Melee, you want the Tallgeese EW. It comes with a huge 807 ATK, higher than even the normal 4* Tallgeese EW Legs, as well as the Close Combat and High Mobility word tags. Finally, they have a trait that gives you a 4% chance not to recoil if using a Saber. For Shooters, you want the Pale Rider. None of these legs are anything to write home about, but the Pale Rider Legs at least have a decent Shooter EX on them.

Well, there you have it. This week's event parts and friends reviewed! I'll see you all next week, Pilots.