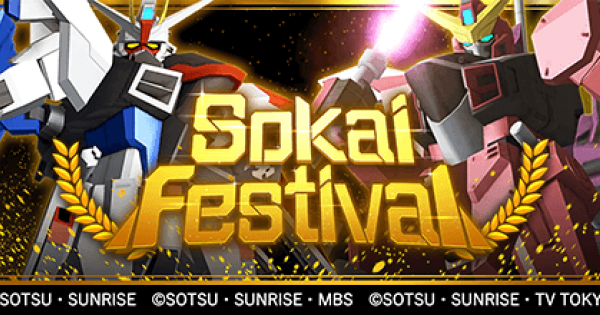 In around 8 hours from the posting of this article, we're getting a rather large update to Gundam Battle: Gunpla Warfare. In addition to the new banners that are coming (Freedom and Justice woohoo!) we're getting a host of other really great content and a bunch of new features.

We discussed them a bit in a previous article (below) so be sure to check that out if you missed it.

The short version is as follows:

What We're Still Waiting On

Now that we've also gotten the updated Challenges from Ono -- allowing users who hit endgame to earn more Haro by replaying the bosses from Story Mode in ultra-hard versions, users still are complaining about a few items within GBGW that need fixing.

First, we need more ways to earn Haro. That tends to be a chief complaint in the game. After you collect the generous surplus of Haro from completing story mode, you are left with an oasis hop to get more. 400 haro chips per 10 player levels of advancement is hardly a king's ransom. Moreover, getting 30 haro for each mission achievement feels a lot like pulling teeth. You'd need to complete 50 missions' worth of achievements for one single 10-pull on a banner.

In fact, on average you should be earning 1 10 pull per 30 days just from daily mission rewards and rotating banner challenges. Considering that in that time -- 4 banners have passed, and you might not even pull a 4 star item, it's pretty unimpressive.

Second, we're still waiting on Arena 3v3 to open up. The weekly arena play has been a blast and a half, but we need more ways to earn arena coins as well -- and the lack of clarity around how exactly some people can hit the heights of arena isn't helping.

While we know some things affect arena score (like overkill damage) we don't know the exact formulas and it's still a bit frustrating that part of it is sheer luck. If you pull the RIGHT opponents, you have a much higher chance of hitting an incredibly high rank. If you pull the wrong ones, you are pretty much out of luck. We'd love to see more clarity around this, and more arena options (in 3v3 particularly).

Third, we could really use guaranteed 4 star pulls. Not much else to say than that. Scrounging to save up 1500 haro chips and getting a bunch of 3 star parts is pretty infuriating. 40% drop rate on 1 purple (4s) part per 10 pull when they're extremely hard to get is pretty rough. It should be changed.

While we are thrilled to see a new patch coming, and thrilled to see Freedom and Justice coming to Gundam Battle Gunpla Warfare, we'd still really like to see more generous offerings of Haro, more arena options, and more clarity around arena play. Speaking of, get your arena play in after reset because who knows how long maintenance will last. And hopefully the addition of gatling gun weapon type means HeavyArms is coming!

It's exciting to see Bandai Namco continuing to release content for this fun mobile game, but we anxiously await these other features as well.

Oh, and we'd like to see Gundam Heavyarms. Please and thank you!