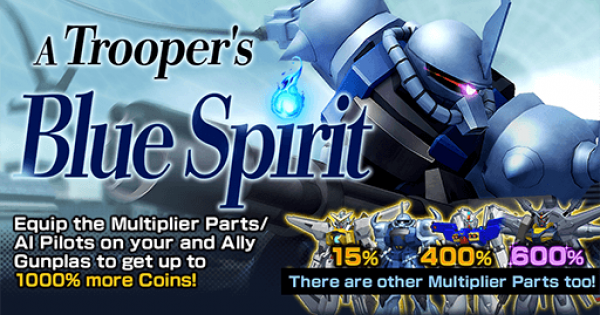 This week we have our first 08th MS team suit, with the Gouf Custom. This is no Zaku boy, no Zaku. Sorry, couldn't resist. Anyways, I personally love the Gouf's design, but how do the parts themselves hold up? Let's find out.

Average stats, low Shot ATK, the bad Zeon and For Urban Area word tags, and a very, very unique part trait. The part trait gradually recovers Armor while you are below 60%. This is the first part trait to passively recover Armor over time, which normally is a very powerful effect, especially on longer fights. There are two issues here. The first is that missions in this game generally don't last very long, especially at the top end of content, like Arena, meaning you don't get to benefit from the trait for long. The second issue is the rate. You only heal 10 Armor per tick. Unless it ticks multiple times a second, the actual healing amount isn't really going to make a difference, since it heals less than 1% per tick. Granted, I don't know the timing of the tick, but some of my suits with no gold parts have between 3000 to 4000 armor. At 10 Armor per tick, that's literally 0.33% per tick on the 3000 Armor suit. So if it heals 3 times a second, that's only 1% health per second healing.

All in all, the part is very unique, but not very good in spite of that. Maybe pick it up for a Supporter suit, assuming the trait to boost recovery works on this trait, but I doubt it. It would normally be a D if it wasn't for the trait that is the sort of thing that could become very good in the future.

EDIT: After further testing, I can confirm that regular EX Skill CD no longer also reduces Initial EX CD anymore. It's possible it changed in the 1.2 update and wasn't documented, or it's possible that earlier testing from prior to 1.2 was faulty. Either way, without the part trait being amazing to save this anymore, the body part becomes a mediocre part only really noteworthy for decent Armor value. I'm sincerely sorry if anyone used up hard earned coins on this part as a result of this review.

Average stats all around, bad word tags in Zeon and For Urban Area and a filler EX Skill. Sad to say these are a skip, because I love the look of these arms.

Above average defenses, average ATK stats, Zeon and Close Combat word tags, and a very weird trait. The Trait boosts Close Shot ATK by 14% when using an In-Fighter. On the one hand, the trait works very nicely in theory, since In-Fighters will almost always be in Close Shot range so it will always be live. On the other hand, though, why would an In-Fighter, especially one in close range, choose to shoot instead of swinging their melee weapon? You'd want to grab a single copy of every body part to unlock the color scheme regardless, but I would skip getting duplicates for this one. These are mildly usable as a Close Combat legs part if you have nothing better to use.

In what is quickly becoming a trend with event suits, this part has identical stats to the Legs but with switched RES stats. It has the Zeon and Close Combat word tags, and a trait that boosts Melee Damage output by 20 when using a Power attribute suit. The trait is very low impact and not worth much to be honest. Like the legs, grab one copy for the collection and maybe to use as a Close Combat back, and skip duplicates.

This is like the Gusion Hammer last event. Above average defenses, terrible ATK stat, bad word tags in Zeon and For Urban Area, and a trait that boosts Strong Melee Damage output by 20, so a trait we can ignore. Like the Gusion Hammer, pick this up for a Shooter or Defender build for the defensive stats and that's about it.

This is identical to the Heat Sword, except with a better trait and being the first Whip weapon we have in the game. The trait boosts Job Gauge by 13% when using a Power Attribute suit. If you don't need the Sword for Saber type synergies, this is the better weapon, and not just because of the trait. Whips are very long range melee weapons, making them more useful for regular attacks. I still probably wouldn't use this on a Melee suit, because of the very low ATK value weakening your EX Skills, but for Shooters or Defenders especially, this is pretty decent.

This part has low Shot ATK, above average defenses, Zeon and Close Combat word tags, and a trait that boosts it's own magazine size by 20%. This part is a combined Ranged Weapon and Shield. This is pretty good for Melee suits. It takes up two lower value slots, gives two instances of Close Combat, and has decent defenses for those slots. If you don't have something better to use in either of the slots, I'd use this. I wouldn't grab duplicates as you aren't using the actual gun portion for much, though.

Overall, this suit is pretty solid, actually. Surprisingly so, especially when most of the parts don't need duplicates, which means you can spend the extra coins on other things like awakening circuit fragments and capsule medals. That's all for today pilots, I'll see you next week with another parts review!