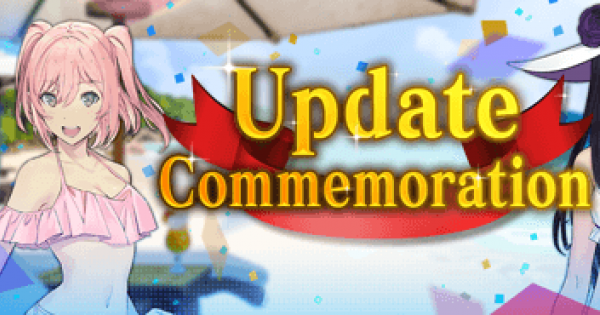 There was a single addition of Gunpla set in Friend Points Capsules.

The Kapool Parts are also available for drops from Free Mission 7.

Its contents and drop rate is exactly the same as Standard Gunpla Parts Capsules, but instead of x1 pull daily this capsule provides x10 pull daily. Make sure you do not miss this! This Capsule will refresh every day at 1:00 PM (PDT).

The only downside with this update is the increased difficulty in obtaining Aegis / Barbatos / Gundam Gunpla Parts, as those three sets of ☆4 were localized in the previous "Standard Gunpla Parts Capsules".

Blueprints have three sections: Gear, Items and Parts. At the point when this article is being written, no Parts are available in Blueprint.

Currently, there are ☆1~3 of Gears affecting Parameters or Cost with each demanding exponentially more materials: 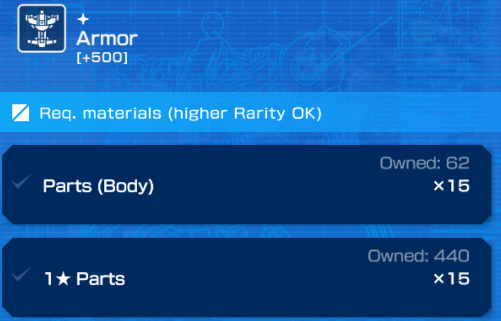 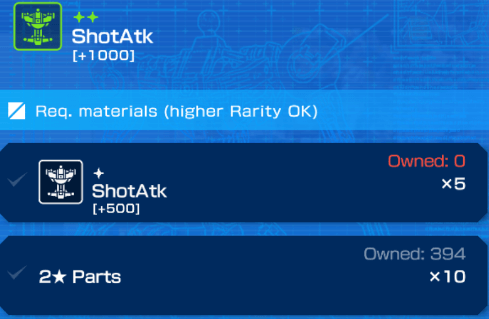 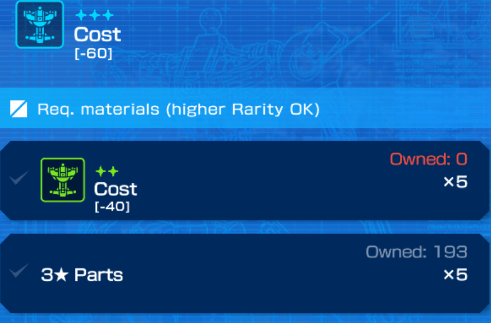 Note that these material demands must be fulfilled individually; Parts(XX)x15 & 1☆x15 means a total of x30 Parts are needed at once.

Gears can be accessed from Gunpla Build and there are 4 other different categories of Gears that are yet to be released (Arms & Legs):

Event Missions have been reworked to be much more F2P-friendly with this new update. The new format allows the players to effectively not need to pull any [Gunpla Parts Pick-Up] capsule to be able to efficiently farm the Event Coins.

Here is the breakdown of this Update's major changes:

- The multiplier Gunpla Parts only affects the new 'Event Points' which is only necessary to progress through the Events Achievements. This means that Event Coins are not affected by multipliers and all players receives an equal amount of Event Coins with 5EN : 1Coin ratio. Event Points meanwhile has a ratio of 5EN : 10Points but also scales differently with higher difficulties

- Event Points rewards got a separate result screen that calculates its amount through many factors:

Basic Points is from how much EN you have spent [5EN : 10Points]
Battle Assessment is a secondary multiplier affected by your performance (most likely identical to Arena)
Bonus Incr.Rate is the multiplier received from specific Parts

"Multi-Mission",  “Dual Sabers” and “Gatling Gun” features will be activated in the game at a later time.

・Increase Player Level cap from 100 to 120 with new Titles
・Display adjustment for when it is possible to draw a Free Capsule, as indicated on the Home screen when Haro jumps up and down and his eyes glow
・Item Box limit of x99 duplicates stacking for the same item will be increased to x999
・Addition of the “Max Value” button at the full details screen of Parts in the Shop
・Making the players easier to understand active Word Tags within the Build screen with UI improvement

・The Follower List could exceed the 100 person limit in some cases
・During Battle, Auto Pilot could activate even when it had been turned off
・Sort settings in your Parts/Items List would not be saved
・Emblems couldn’t be added to some Parts
・Some devices would display an error message after viewing the Terms of Use
・EN couldn’t be recovered from the upper part of the screen on some devices
・Buttons could stop responding when closing out of a window on some devices
・During Battle, using certain EX Skills could cause the Enemy Gunpla to stop moving
・Push notifications for EN Recovery could remain onscreen for some devices
・When building during the tutorial, Part names may not have been displayed properly
・Parts in the Photo Studio may not have been displayed properly on the pose selection screen
・Other minor errors were also corrected

Another thing to note is that Relief Gunplas selection list seems to have been fixed, now with a much more random selection of players from the Follower List.