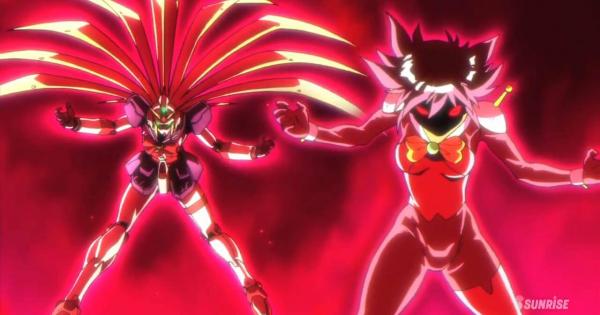 Welcome to the post-Penelope version of the Weekly Event Digest, Pilots!  Seriously, the last week has felt seriously weird with Penelope running around in that glorious huge kit.  I know I've been having some fun kitbashing with that atrociously huge Gunpla, but it's time to get hype for the next set of releases!

I'm super excited to see some more monoeyed-love with Efreet Kai.  While I'm not really into the whole Blue Destiny bit, I'm really down for a spike-shouldered monster with some dual-wield sword combo.

Initially when the notices went live for Asia, Japan, and the United States, Nobel Gundam was listed as a 3* release on Asia and Global clients, while Japan clients were showing a 4* kit.  This is actually the reason for my holding off on this article a little bit, because a few hours later all notices were updated to reflect that Nobel Gundam will release as a 4* kit.

While it would've been good for some added variety to the 3* pool, this isn't very surprising that it's been corrected to 4*, as we haven't seen a 3* gacha release since Dragon Gundam alongside Astray Red Frame.  That's not so bad, though, because now we know that Nobel will come along with 4* quality Parts and a new Whip.  This great kit releases alongside the Gundam Full Armor [Thunderbolt Ver.], which packs a ridiculous set of shields.  Gonna be sick for sure.

Quatre Raberba Winner and Anavel Gato are the Pilots for this week's release, and while I'm surprised at Quatre, I could've seen both as a 4* release given their notoriety.  We'll dig more into my thoughts on that later.

Finally, we already have this one live in the game, but we'll see another Rate-Up Banner that actually provides better shots at bonus Parts for the Event with Grandpa Gundam and Char's Zaku II. 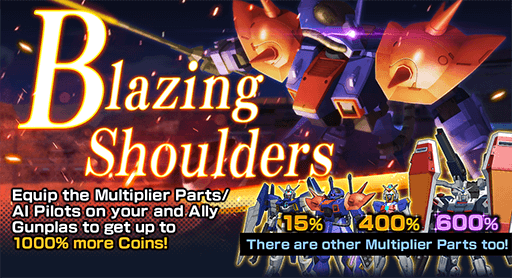 Yeah, I mean... Efreet Kai has some seriously blazing shoulders.  Look at those things; they're like beacons in space!  Seriously, though, this thing looks awesome.  The recent Gouf Custom release had me down on specialized grunt suits being added as "welfare" Parts, but I'm hopeful for this one to have some great things.

If nothing else, we're at least likely to get that dual-wield category weapon with Heat Saber, and I can at least hope that these weapons are better than the Strike Noir dual-blades.  That's not really asking too much, is it?

Again, I can't stress enough that all of the bonus modifiers are applied on a per Part basis, so that you can equip multiples of the same part to multiple members of your squad for added bonuses.

In stark contrast to the last two weeks, we've got a long list of Event Bonus Modifier Parts:

Whew! That's a pretty extensive list, for certain.  We've got a whole slew of 10 and 15% Pilots coming out of our ears, alongside all of these additional bonuses from lower-tiered Parts.  Included in that is Zeong; the recent release with Build Strike [Full Package], which feels almost like a straight-up gift to give us that one with all of these Parts and Pilots otherwise.  The lowest that any free-to-player is looking at here is 270% when packing nothing but 2* Parts and Pilots.

**It's worth noting here that when the release went live, Gundam Full Armor [Thunderbolt Ver.] had a Shield listed as a Part, which has since been removed with an apology from the devs for any inconvenience caused. We're unsure if it'll come with any Shield or Weapon, but we're skeptical for the moment.**

Scubasage is going to be here Thursday giving you the skinny on what's good with Efreet Kai on Thursday, so be sure to check that out!

Looks like we've got another properly-thematic Rate-Up Banner for some bonus action with the Event this week.  The Grand-daddy Gundam himself and Zaku II [Char Aznable] are the feature this week, with the standard 5% rate and a slightly raised rate of these two appearing. Don't pull unless you really want that Gundam Chest, or you just love the kits.

Last week we got Domon Kasshu, which was just awesome, and this week we follow it with Nobel!  God Gundam on the rise? Please?  Anyway, this is an excellent inclusion, and I'm actually fairly glad it isn't a 3* inclusion, because it has a chance to be a great kit.  Easily bash-able and unique, it'll be a welcome addition for sure.

With Nobel comes the Beam Ribbon, which is the Gundam's signature weapon and a Whip-type for sure.  I'm hoping it's at least 3500 attack so that it's got some oomph, and maybe a good EX Skill for good measure.  I'm pretty sure Nobel is going to be S type, though.

Gundam Full Armor [Thunderbolt Ver.] is my focus this week though, with those four shields and that crazy weapon setup.  I'm pretty sure we're going to see some unique  missile-launcher shield attack with the Back Part, or maybe just missiles haha.  With the Shield being removed from the modifier list, it's likely that the kit is going to consist of a combined Arm/Shield Part with the two arm-mounted shields (duh), with the other two mounted on the back sub-arms. Hopefully even some High Firepower Tags.

AetherRose isn't going to quit! He'll have you ready to know if you're pulling on Tuesday with the Should You Pull article!

WHO ARE THESE GUYS?! ANAVEL GATO AND QUATRE RABERBA WINNER?!

Anavel Gato, the one who stole Physalis and piloted it, is our 4* Pilot this week!  This dude is a seriously tough customer, ready to put anyone in their place.  I kinda have a feeling he's going to come out as a real tanky Defender, and if we're lucky enough he'll have the attack stats to back that up.  I can't possibly imagine the sort of Trait he's going to be carrying around, because Bandai likes to come at us from literally nowhere with that.  Gimme some ALL POWER BOOST though, please.

I'm just really surprised that Quatre Raberba Winner, the pilot for Gundam Sandrock from Gundam Wing.... is a 3* Pilot.  I know that the code-redemption Sandrock was a 3* as well, with really bad stats and exclusive to Japan, but I was sure he'd land as a 4*.  I'm sure he's going to be a solid In-Fighter, or at the very least of average viability.  I'm guessing maybe around 800 to 1000 melee attack here, honestly.

That's all we've got this week!  If there's any further updates to the notice, I'll just update this article with an added section explaining the need for the edits.

Be sure to drop by our GBGW: Newtype Labs Discord Server for some great conversation about the game, tips, guides, all of our Gamepress content, some really awesome contests.  We've got a new Arena-focused event starting this March that we're about to launch, as well as monthly Gunpla Design Contests for $10 USD, and a Semi-Annual Design Contest in which you can win an actual HG model kit!

Hope to see you there, pilots!