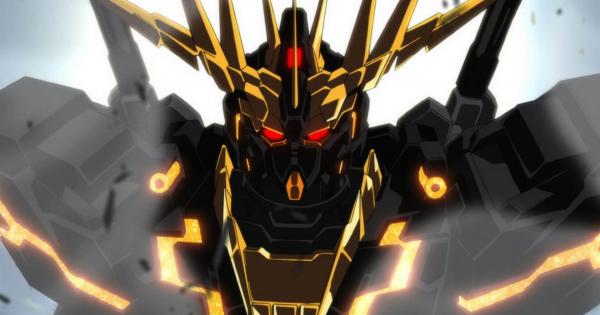 Welcome to the slightly-late-but-still-timely-enough Weekly Digest, all you classy pilots!  It's been a busy week for me, but I am beyond hype for this coming Banner/Event shift on Tuesday; Banshee and The O are the Sokai inclusions and I cannot be more excited.  Admittedly I do have somewhat of a bias right now, because I have finally succeded in getting my wife hooked on Gundam.

Lately we've been watching through Gundam Unicorn, and she's honestly sad she can't pull on Kshatriya right now, but shares my excitement for the edgiest edgelord of Banshee, and she's easily ready to go all in.  I don't blame her.

Adding the most chunk of chunky boys into the mix with The O is just going to be one incredibly interesting selection of parts (yeah, I have a thing for big gold robots... what of it?), despite the oddity of no weapons for Banshee with only a single Beam Rifle for The O.  What's up with that, anyway?

Susanowo makes a sudden debut alongside Mister Bushido, and I'm hoping for some spice in this welfare release.  At least we're going to have another readily accessible Pilot that could definitely be worth the duplicates to max value.

It's gonna be a hot ticket week for sure, so let's dive right in and see what's what! 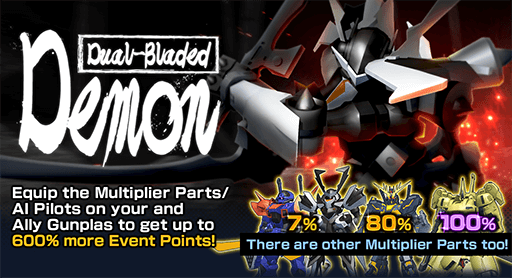 Honestly I think I'm a little too hype for hype on these Gundam 00 suits, but LOOK AT THIS THING.  Anyone familiar with the anime knows how much of a beast this modified and upgraded Flag was, and getting it as welfare may be a little disappointing, but it'll be readily available.  So if any Parts are really worth their weight in duplicates, then we'll have the option to just pick them up for a small payment of our time.  Done deal.

At least we know we're getting the dual-blades in the shop as well, and I hope these ones are more worth running than the last dual-blades we got *cough*Strike Noir*cough*

Entering the Event exchange store with the Susanowo is Mister Bushido, whom I fully expect to be a strict In-Fighter Pilot, and I'm just hoping they give him an all-power boost or something to make him undeniably viable.  I guess I'm hoping for too much there.

It's important to remember that it's going to be a Point-based Event this week, as previous Sokai Events have been, and all Parts will apply their bonuses on a per part basis, so you can slap on three Banshee Arms for your squad and they'll all add 80% each.  The bonuses cap out at 600% and not 1000%, and as such, the modifier values seem low due to the lowered ceiling.

Luckily Exia and Dynames make another appearance as fair modifiers with their 15% boosts, and there's a whole ton of low-tier stuff in the 7% area, so with a little diligence, even the most free of players should be fine to farm whatever they need from the Event store and achievements.

If my math checks out, and I sure hope it does, you should be able to reach a minimum bonus modifier value of 189% with only utilizing Event Parts, or lower rarity Parts, and over a week of regular Event engagement, that should be enough.

Scubasage is going to give you the low-down on Susanowo and Bushido on Thursday with the Event Part Review.  Be sure to check it out, because I have a good feeling this could be an awesome one.  Gosh, I hope so.

I'm gonna go out on a limb here and say this may be arguably one of the best, if not the best Rate-Up Banner we've seen.  I know we had Exia and Dynames, and that Banner was hot as fire, but this really competes with it.  The X Divider Head is still a staple of many melee builds that still afford buffs, and has great longevity in Multi-Missions, while Astray Red Frame packs a wide series of excellent Parts, as well the renowned Bisect (Head for Protag/Close Combat S type, Chest for In-Fighters and Tag-patching, Arms for Lightning Ball, Gerbera Straight because it's still a great weapon...)

It doesn't necessarily have to be the best to highly recommend dumping your Standard Capsule Ticket reserves on this bad boy, if you have it.  Otherwise, I'd need some heavy persuasion to pull on this instead of the upcoming Sokai with what we've got on the menu.

Every time I think about this Banner, I get more and more excited.  Banshee is the counterpart to the extremely-popular Gundam Unicorn, and is one absolutely bad mamma jamma.  From what we can see in the Event bonus Part list, Banshee lacks any weaponry or Shield additions, and only comes as the presumably 5 Part set if no combined Parts.

BUT... From the Event image itself, we can see that the Banshee comes equipped with both the Armed Armor VN and Armor Armor BS attachments.  The likely scenario is that the Armed Armor VN (Vibration Nails) may be a combined Part as Arm/Shield, since the VN is treated with a beam-resistant coating and doubles as a Shield.  The BS attachment is the Beam Smart Gun and may be involved collectively in an EX Skill with the VN attachment. I can expect another NT-D Awakening mode Part here as well on the Chest.

Regardless, I fully believe that Banshee is going to be worth the pulls.

Bringing up the rear, but definitely not to be outdone, is The O!  Built by Paptimus Scirocco in Mobile Suit Gundam Zeta for his personal use, this is an absolutely stacked nightmare-monster of a Mobile Suit.  Not only is this beast ridiculously massive, it comes equipped with four hidden Beam Sabers and a Sub-Arm Unit built into the front skirts of the armor.  I'm unsure of how many Sabers we'll see in Skills, but it's likely we'll get the Sub-Arm Unit on the Legs.

I have my eyes on that Large Beam Rifle, based on how ridiculously powerful it is in canon source material it fires beams on par with that of a Mega Launcher, and is powered by an E-pac mounted below the grip.

Despite being enormously bulky, this suit is even heralded for its impressive maneuverability, which I'm sure will factor in somewhere.

AetherRose is going to give us his breakdown of the Sokai Banner Suits after it drops, so be ready for that Should You Pull article!

WHO ARE THESE GUYS?! RAU LE CREUSET AND SHIHO HAHNENFUSS?!

I'll share an unpopular opinion here and say that I am not a huge fan of many characters in the Gundam SEED universe..... With a major exception of Rau Le Creuset!  This guy is not only composed and charismatic... and crazy... But he doesn't even bat an eyelash when dropping colonies.  I'm glad that we didn't have to wait long after Providence's release for him to enter the game, and I'm really hoping he's going to be a Long Shooter.  We just do not have enough significant Long Shooters in the game, and this would be a clear bet.

Just let him be a new 1700+ shot attack Long Shooter with Ace Exclusive and you can give him a fairly mediocre Part Trait.  That's fine.

Shiho... Hassenfuss?  Whosawhat?  Hahnenfuss!  Shiho Hahnenfuss is the 3* Pilot this week, and her name is an absolute disaster.  An Ace pilot working for ZAFT, and the pilot for the CGUE DEEP Arms, she could really be a contender as a decent shooter pilot in a 3* tier.  I'd rather get slightly above average shooters and fighters in banners than ones that are super off like a melee attack oriented shooter.  I don't expect a ton here, but I can hope for something fair, right?

Be sure to drop by the GBGW: Newtype Labs Discord Server and get ready for our upcoming Gunpla Design Contest starting March 1st! The theme is "The Best of the Worst".  Build your best ugly abomination of a mobile suit and show it off for a chance to win a $10 USD Gift Card for Android/IOS.

Catch you next week!