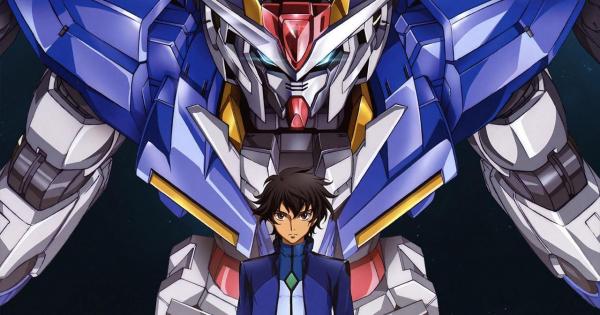 Welcome back for the latest edition of the Weekly Event Digest!  This week is going to be pretty exciting, with some melee heavy units in Build Burning and Master Gundam as our featured Banner, as well as Gaia Gundam in the Event.   On top of that, the Champion Matches started this week, and Big Zam will finally enter the game as a stable raid (we hope).

I'm beyond excited for Setsuna F. Seiei, though, as my favorite Gundam anime has definitely got to be Gundam 00.  Hate him or like him, he was a great main character, in my honest opinion, and with the recent leak his inclusion is even cooler.  With him comes Auel Neider, the slightly-deranged pilot of the Abyss Gundam.

Let's get to the break down!

NEW EVENT - CHARGE OF THE MOTHER EARTH OF DARKNESS 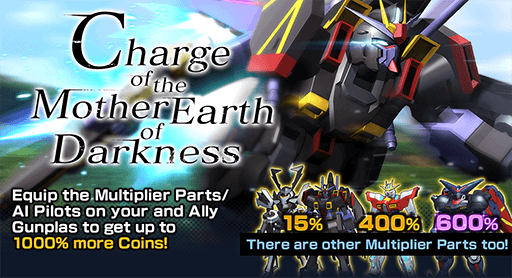 I have to admit, this is probably the worst Event name we've had yet.  It just... doesn't flow at all, and could have been a lot better simply by not including "of Darkness".  It reads almost like an angsty LiveJournal entry, where all of the other previous Events were clever, humorous, or both.  Naming aside, it's definitely cool to see Gaia hitting the game as an Event suit, so it's freely available... along with that sick paint job, though fairly similar to Blitz in palette.

The best part about this week's Event is that the Gaia comes complete with melee and ranged weapons, as well as a shield, providing a good deal of Parts for Event bonuses along this week and next week.

As always, the Parts apply bonuses on a per part basis, so go ahead and run 3x Gaia Gundam and Mr. Bushido if you don't have anything better, and you'll make out with an easy 405% bonus.

Oddly enough, Akatsuki is providing 30% bonuses this week instead of Aile Strike, which is the other half of the rate-up Banner, which Force Impulse is the other half of, which provides a 30% bonus as well.  The reasoning for that is beyond me, and I feel it would've been better served with just including the Aile Strike and Kira, as well.

The bonuses don't honestly look that bad this week, though not quite expansive, and with the noted amount of Gaia Parts, it should be easy for free to play players to get a leg up on Coins.

Scubasage is gonna break down Gaia Gundam on Thursday and tell us its worth in the Event Part Review, so be sure to check that one out!

I really can't get my head around the implementation of these Rate-Up Banners. Sometimes they're pertinent to Arena, sometimes they're completely unrelated to anything, sometimes they give enhanced rates for Parts that give current Event bonuses.  Really they just seem sorta random at this point, and only ever loosely related overall.

This week is a little more off though, with Force Impulse adding a 30% bonus to the Event while Aile Strike adds nothing.  I can't really see pulling on this over Build Burning or Master Gundam, considering that there isn't a wide array of greawt Parts in this specific Rate-Up.

Only pull if you really want them.

Only pull if you want them. !!NEW MOBILE SUITS APPROACHING - BUILD BURNING GUNDAM AND MASTER GUNDAM!!

Wow.  This is going to definitely be a spicy melee-focused Banner.  Not only do we have the heavily anticipated Master Gundam, but also Build Burning Gundam (from Gundam Build Fighters Try; not Burning Gundam from G Gundam).

Build Burning Gundam is going to be something I really am excited to see, as I expect these Arms to be something serious in the terms of raw power.  Unfortunately for a good deal of us, there is no 4* Module listed or expected, based on the Event Bonus Part list.  I usually worry about the kinds of kits we get that don't have any weapons or Shields to speak of, but I am very hopeful for something powerful from this extremely awesome kit.

Maybe we'll see a non-Sokai Power A melee EX Skill on an Arm Part that also features something like 3300+ melee attack, with Close Combat tags.  A guy can dream.

Master Gundam, on the other hand, comes featured with something called the Master Cloth. This is a beam-type weapon in the form of a belt (or Whip), so I expect something that will either compete with or exceed Beam Ribbon and Gundam Hammer.  Not only does the Master Gundam feature that weapon, but the Arms are capable of all sorts of crazy attacks like piston-fists, rocket fists, and beam cannons, along with all of Master Asia's martial arts techniques.

Both of these kits will feature high-power melee Parts, and you can definitely bet on that one.  AetherRose will be sure to give us the skinny on what Parts are worth the pulls in the Should You Pull article on Tuesday! 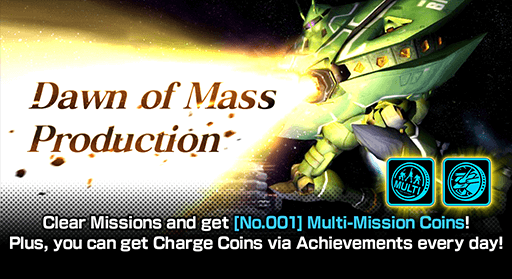 Rather unexpectedly but totally welcome this week is the inclusion of the Dawn of Mass Production Multi-Mission.  We've been waiting for awhile for this, as it was initially slated for an end of 2019 release, but the Beta was a little shaky, and we got other Multi-Missions to tide us over in the meantime.

With Big Zam entering comes another twist; [001] Multi-Mission Coins, and Charge Coins (for the Gaia Event) obtainable through daily Achievements.   You can trade these Multi-Mission Coins for items like Upgrade Materials, but beyond that we have no other specific information about purchasable items.

The EN usage for Big Zam missions is the same structure we're used to, with only the Host incurring an EN cost, and more Coins being awarded to the Host for their trouble.

The Event begins on February 4th at 7:00PM PST, so get ready!

WHO ARE THESE GUYS?! SETSUNA F. SEIEI AND AUEL NEIDER?!

I have to say this right now, but if Setsuna doesn't come with Gundam Type as a Word Tag, I'm going to riot.  I hope people are with me on that, because Setsuna F. Seiei IS A GUNDAM.  This extremely skilled Pilot is our 4* inclusion this week, and is best known as the Pilot of the iconic Exia Gundam, leading into things such as Qan[T] Full Saber.  With the fact that Qan[T] is incoming, having Setsuna makes it all the more sweet of a release.

I suspect that he'll be an Out-Fighter, with a likely staggering melee attack score similar to that of Duo or maybe Domon.  He needs to have Gundam Type as a Tag, and Close Combat couldn't hurt him.  I'll be a little surprised if he's an In-Fighter instead, and absolutely shocked if he's anything else.

Auel Neider comes screaming psychotically into the 3* slot this week, and I'm sorta hopeful he's going to follow the recent 3* Pilot trend of actually being viable.  I'm more expecting him to be a Long Shooter, but Middle Shooter is a safe bet, and we're hoping to see around 800 to 1100-ish shot attack here.  Probably won't have very great Tags though. 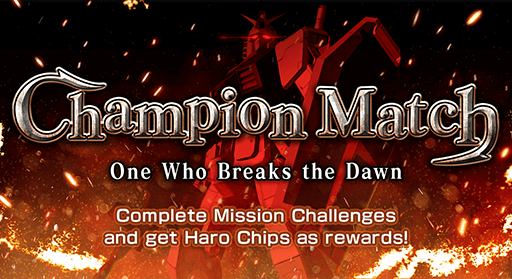 During the New Year Sokai Festival and the One Who Breaks the Dawn Event, it was explained that the top 5 ranked players from each leaderboard for each of the two weeks the event ran would be featured in a later Event.  This is that Event.

There are ten missions in total, and each challenge cleared will award 50 Haro Chips (for a total of 1,500 across all ten missions).

The top ranking players for that Event are:

I'd like to offer a hearty "congratulations!!!" to these players listed here, if you're reading and if you're not!  We'll have some fun hunting down your Gunplas for the coming week and collecting our sweet, sweet HC.

Be sure to drop in next Monday for our 20th Weekly Event Digest!  It's going to be a real crazy couple of weeks, and I can't wait to see what's going on.

I wanted to mention as well, that we're currently running our February Gunpla Design contest in the GBGW: Newtype Labs Discord Server, where you can win a $10 USD gift card for Android/IOS, but we've also got a new event starting this March: Squad Strike!

It'll be a team-based event where players score their best across multiple Arena leagues in game, tally scores together as teams, and vie for the first place.  The reward is a team-wide specialized role for the server, as well as "Ace Pilot" roles for the top five scorers of each team.

It should definitely be a lot of fun, so drop by and hang out with us sometime!