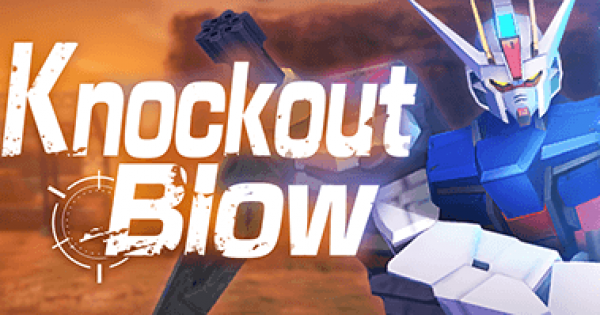 Welcome back for the eighth installment of our Weekly Event Digest!  Really this is the tenth, but we had some surprises come up recently, and so we’ve had to stagger things when it went down in that way.  We’ve got some exciting things happening this week, though!  Virsago and Gundam X will be available in the featured Banner for the week, while Aile Strike and Aegis will be featured in a Standard “Rate Up” Banner; you’ll still be able to draw anything in the Standard Pool, but you’ll have a slightly increased rate of drawing Aile Strike and Aegis.

Thankfully, these two are actually modifiers for the Event this week, but more on that later; this is just a great way to get the suits you actually want, and on a likely rotation of a new banner each week (that is just opinion, mind you).

Also we’ve got some more Mobile Suit Zeta Gundam-era Pilots this week with Paptimus Scirocco (the pilot for the devastating "The O"), and Roux Louka (one of the later pilots for Zeta); and we’ll go deep on explaining what we know about the upcoming Event: Knockout Blow!  Let’s get to it, Pilots! 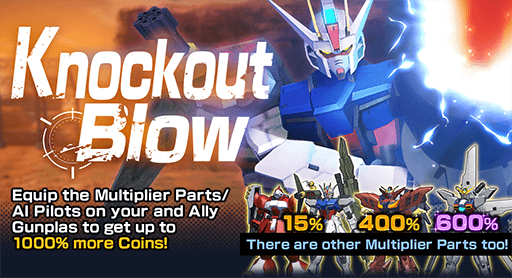 Launcher Strike is here, and I am definitely ready for this.  The last time we saw a variant of the Strike Gundam in an Event, it brought us one of the best selections of “welfare” Parts that we’ve seen available, and I am hoping that Launcher Strike is just as meaty.  Unfortunately, we won’t be seeing the “Agni” 320mm Hyper Impulse Cannon as a weapon during this Event, but you can expect that it may be part of an EX Skill that the suit actually has.  If not, hey, thems the breaks, and Bandai got me again.

It’s important to note that we’ll be moving back to the Card Event style this week, so it looks like Bandai has settled on their Event rotation throughout the months, as this was the time we saw the debut of Cards with Age Normal last month (second week).  Let’s hope that there are some cool things to buy or craft with these items in the blueprint shop!

Keeping with the format in which Standard Events have high bonuses, we’ll see a repeat 1000% bonus cap modifier to multiply your Event Coin drops, but as far as we know, the modifier will not affect the rate of drops for Event Cards.  As always, remember that the modifiers are on a per-part basis, so you can even equip multiple members of your squad with duplicate parts and stack bonuses that way.

This week the bonuses are much more heavily focused on Pilots in the low tiers (several 15 and 10% bonuses), and less in the area of Parts, but there should be enough of a selection to help just about anyone farm for what they want.

Event bonus modifiers are as follows:

We’ll see an evaluation of the Launcher Strike Gundam popping up this Thursday by your friendly neighborhood Scubasage, so be sure to watch out for it if you want to know how well it stacks up!

Satellite cannon?  SATELLITE CANNON?  Oh my goodness, I hope Gundam X comes with the satellite cannon EX Skill on the back.  The main Gundam of After War Gundam X, Gundam X is the predecessor to Gundam X Divider, but shares very few similarities with it, despite the makeover.  When it was upgraded into the X Divider, it lost the satellite cannon, which is so likely to be a powerful shot attack EX Skill mounted to the back that it just isn’t funny.  I hope it isn’t funny, actually, but it would be pretty funny if Bandai actually reads these and just was aiming to fool me.

If not, we may finally see the third shot-based Power A EX Skill to be put into the game, and it is badly needed.  The Large Beam Saber and Shield Buster Rifle will be released in the Banner alongside the suit, and I want to say that I’m expecting good things from the Rifle.  It transforms between Shield and Rifle, canonically, and as a shield sports 3 times the normal toughness of similar armaments, even being able to withstand prolonged exposure to beam sabers.  This could be one gem of a part, and I can’t wait to the Gundam X’s stats.

Virsago is up next, and this is a beast of a mobile suit, and definitely could be really interesting here.  It has both devastating melee capabilities and earth-shattering ranged power, so it could feature a mix of competent Parts.  The Chest in particular could sport a supremely powerful shot-based EX Skill, as it is Virsago’s most powerful weapon; the Mega Sonic Cannon.  Virsago’s arms are even built to be able to grip the ground and anchor the suit in order to even fire the cannon, and comes equipped with the Strike Claws in order to do so.

Releasing with Virsago is the Strike Shooter, which I assume would be the combined form of the 3-Barrel Strike Shooter by a different name (three weapons combine into one handheld rifle).

Really, this suit has me a little more unsure than my hopes for Gundam X, but those arms could be absolutely destructive if Bandai wanted to make them that way.

NEW STANDARD CAPSULE? RATE UP FOR AILE STRIKE AND AEGIS

In a surprising turn of Banner news, last night we had a new Standard Capsule Banner show up that offers as slightly increased rate at drawing Aile Strike and Aegis Parts in particular.  The rates are the same as the Featured Banners (5% rate at pulling a 4* Part).  This special “Rate Up” Banner is only available 11/17/2019 7:00 PM (PST) – 11/24 7:00 PM (PST), so if you are looking to complete either set or have your hearts set on something like the powerful and underrated Aile Strike Back, you may wanna give this banner a rip!

In the future, it is my personal opinion that we could be seeing more of these Banners, which would offer increased rates of specific Parts from the Standard Capsule Pool like maybe, say, Tallgeese EW and Gundam Wing, or GP01 and GP02 to speculate baselessly.  They could even do pairs of Gunpla that don’t match whatsoever. Sky’s the limit!

WHO ARE THESE GUYS? PAPTIMUS SCIROCCO AND ROUX LOUKA?

Wow we have a ton of Mobile Suit Zeta Gundam-era Pilots in this game, and the list keeps getting longer!  Paptimus Scirocco; the pilot of The O, has joined the cast as our newest 4* Pilot!  This guy has some serious issues to take up with a hairdresser, and you can bet that if I say this dude is gonna be a beefy Defender, Bandai is going to make him a paper-thin In-Fighter.  The O is one powerhouse of a suit; huge, overwhelming in melee, and tough tough tough, so it would make sense for Paptimus to be an In-Fighter, and hopefully this means Big O is on the way soon.

(Defender, please, just not an In-Fighter.  He needs some higher tier Armor and more melee attack than 500. Come on.)

And here comes Roux Louka to round out our 3* slot, and Bandai clearly didn’t get my memo last week, because Noin was horrifically bad.   Despite that Roux ended up piloting Zeta Gundam, she’s likely to be a wet sponge that has higher defense than attack of any sort, and is probably going to be another In-Fighter (I am not joking, Bandai… we need better 3* Pilots.  Stop making duds and give us some dandies!).

There’s something final I want to mention about the new Featured Banner and Event.  We had a leak come across the unofficial discord a long time ago that contained a long list of Gunpla we may see hit the game, as well as 3 supposed Event suits (one we’ve seen in Age Normal, and one missing w/ Beginning 30).  Virsago, Gundam X, and Launcher Strike were all on that list, and it would stand to reason that, if this leak was even potentially correct, Bandai would start moving things around to throw us off the scent (GP01 is also on the leak list and is already in game).

Leaks are bits of information in whole or in part which the developer did not intend to be made public knowledge, and several times, these leaks are actively thwarted.  Maybe the leak was legitimate and Bandai pushed back the releases, moved some around, and otherwise changed it up?  Possible.

For reference, here is the screenshot that I obtained from the unofficial discord: 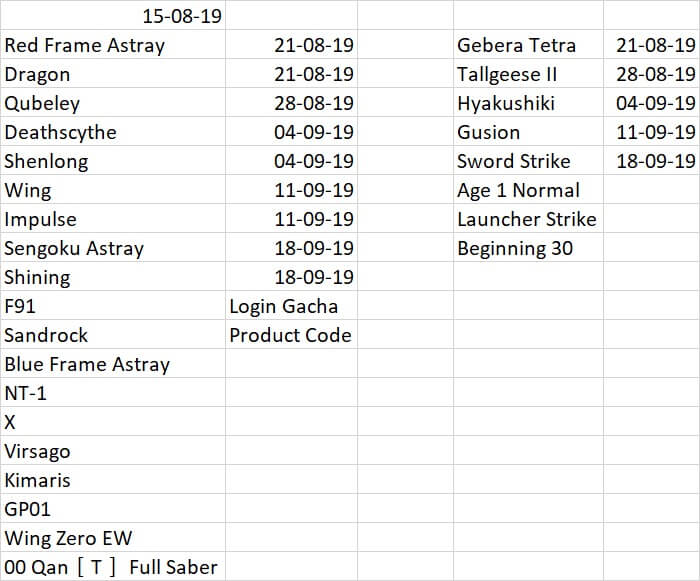 I’d like to further explain that this information that I am talking about is simply supposedly leaked information that is nothing more than a list of things on an Excel spreadsheet.  There is no proof beyond that this screenshot was obtained by me during September, and that it does include releases that have appeared since that time.  Beyond that, I can assure you that I did not create this, I do not have any advanced information, and this is in no way “proof”.  It could be nothing more than lucky guesses, but it gives us an idea of what we could see.

Get ready, because tomorrow is the new Banner for Virsago/Gundam X, and AetherRose will be ready with a new Should You Pull article!