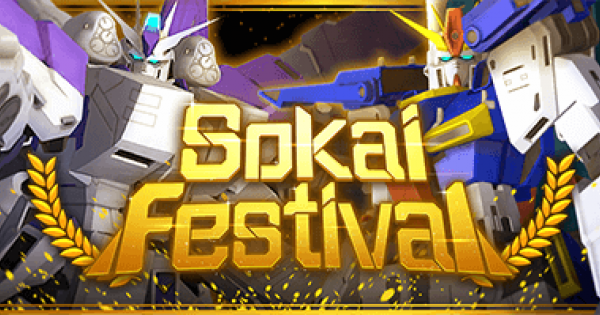 Welcome back for the Sokai Festival update that we’ve been waiting for with much impatience.  Sadly, I was really hoping for a Qant Full Saber with Gundam 1.5 Banner, but my hopes were dashed… And brought back with the awesome-looking Strike Noir hitting the Event shop!  From how things look, we may get a fairly healthy variation of Parts, based on my own speculation, and we’ll get more into that individually.

Garrod Ran has me sorta hopeful, too.  I’m really excited to see if we can break this chain of In-Fighter/Out-Fighter Pilot releases we’ve had lately, and this may just be the dork to do it.  I always have high hopes for Sokai Festivals and this one looks to be pretty exciting.  It also marks the last leg of the [002] Premium Material Campaign, and with the parts we’ve had recently, I know people are buzzing about what they’re going to choose.  Be sure you’ve finished Knockout Blow Achievements so you don’t come up one short during Sokai! 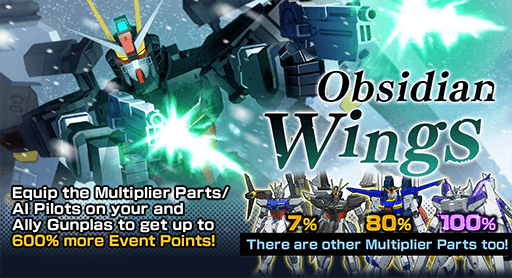 Wings is right!  This whole week is all about flexing those awesome Back Parts, and Strike Noir is going to give us a 3* wing to make your Gunpla look fantastic (and it might be good, too!).  I have to admit that there’s been a bit of misleading information or confusion regarding the Event, and evidently a typographical error in Japanese Notice Updates.  Strike Noir does not appear to be released alongside any Dual Gun or Dual Pistols.  Currently, we have no dual-wield Part that is anything other than a sword, and we have had no actual confirmation that these guns will be added in the next week (BUT WE COULD BE SURPRISED, TUESDAY).

Additionally, on the Japanese Notices, it was brought to my attention by a community member that they had listed the Dual Pistol as a weapon for bonus modifiers in the Event, while the North American Notices contained mention of Fragarach 3-Beam Blade.  This morning the mention of Dual Pistols/Guns was removed and replaced with the Fragarach, so as far as I have come to personally understand this, it was simply added to the Notices in error, and that sort of thing happens.  We’re sure to see a dual-wield gun weapon eventually, so don’t get worried about it yet.

With Strike Noir being added, I can only hope Bandai is going to pump the brakes on releasing such rapid-fire Gundam Seed content, just so we don’t get the part pool entirely oversaturated too soon.  We’ve got a lot of Gundams and various Mobile Suits from the canon material that can be added over time, so I hope we can step away from this and get into some other series that haven’t been represented so heavily (like maybe Gundam 00 or finishing the Gundam Wing 5… Or even some more G Gundam love!)

Anyway, I don’t want to ramble too much about oversaturation of the Part Pool, or the error with the Notice… but a great note is that Sokai Festival has a pattern of adding a Pilot to the Event Coin Exchange, and this time it’s Sven Cal Bayang!  I know a lot of people are excited about this, and we can see his inclusion confirmed on the bonus modifier Part list.  Which actually also tells us something a little less happy – not a lot of bonuses, and one of the major ones that people may have without pulling on the Sokai Banner is Astray Red Frame… Mostly due to the large amount of people that either pulled Astray Red Frame Legs or took them as the last Premium Material Campaign.

Free to Play players may struggle a little bit here, as we know Sokai events are pretty demanding and there’s not a lot of depth regarding modifier Parts.  A lot of people are going to be riding mostly Event Suit Bonuses (bonuses given from only using current or prior Event Suit Parts like Launcher).  So let’s take a look at what we’ve got:

That’s it!  That’s actually one of the shortest lists I’ve had to condense for legibility… But a lot of people have either pulled for Lowe Guele or gotten lucky, and he’s going to be a good boost here to slap into a Pilot seat.  Unfortunately, neither Stargazer or Launcher Strike have weapons, so that limits some versatility in Parts and bonuses, and there’s only even two guns listed, and one is a Banner Part.

The takeaway though, really, is that you don’t need to get every thing from every Event every time; just what you really want or need that is within your realm to achieve under the time limits.  If you really want something, you can maybe spare some Haro Chips for energy restoration and squeeze out some more runs for currencies and the like.  I definitely don’t hassle myself with getting every Part from every Event in a natural 5* state, but I know that not everyone is going to agree, and that’s definitely okay.  Just trying to give a little optimism.  Regardless, I know a lot of people are hyped up for Strike Noir, and I’m definitely one of them

NOTE: All Part bonuses are applied on a per-part basis, meaning that you can equip multiples of the same Part across any of your three squad members, and it will stack those bonuses. Combined Parts (like Arm/Shield, Arm/Gun) only count as one part.  Your friends do not count for bonus modifiers.  Good luck, Pilots!

We have got some chunky boys here, and they both boast impressive firepower in canon.  Hi-nu HWS [Ver. Ka] is an absolutely terrifying monster of a Gundam, and has some really interesting aesthetic appeal.  The front skirt is one of those sub-arm Parts, so we’ll likely see a melee EX Skill on the legs regarding it… But I’m really hopeful for some specific parts here; namely the Back, the Rifle, and… you guessed it! The Shield.  Hi-nu HWS packs as Funnel system on the back, and notoriously these sorts of EX Skills are just not worth it in-game, but this could very well be different (I hope….), but the wing look just absolutely rocks. I know, I’m a sucker.

The Shield and the Rifle though… These babies are definitely capable of being awesome.  The Hyper Mega Rifle is listed as being as powerful as several battleship-class mega particle cannons, and is actually just the Nu Gundam Rifle in canon with added parts for firepower.  The Hi-Mega Shield itself is a huge Part that packs its own twin mega particle cannons, and also doubles as an attachable back thruster.  These could be really strong in their own rights with either powerful EX Skills or Traits, because the stats are already expected decent.

Not to mention that the Head could very well exceed Nu in Shot Attack (maybe?), so definitely be sure to check the stats when it drops.

Conversely it looks like there’s a shot at the Enhanced ZZ Gundam to be more focused on melee with the Hyper Beam Saber being added alongside the suit.  Maybe another 4,000 attack weapon?  Maybe it has an insane Part Trait?  Either way, this bad boy packs wings on both arms and fits this whole “Wing Week”, as I’ve dubbed it in my head just now.  In addition, though, the Back Part could include the 18-Tube Missile Launcher as an EX Skill, and rightly should, maybe even to finally get us a really solid Ranged Back EX Skill (Satellite Cannon, I had such high hopes for you…) that would give us some more options with Shooter Builds beyond Freedom Legs and RX-78-2 Beam Rifle.

Honestly, I think both of these kits are going to be sorta heavy on defensive stats with how built-up they are in size and armor, but they also have exceptional mobility with all of their added thrust capabilities.  Sokai Banners do tend to release Parts with a higher overall stat allotment though, so it’s very likely they could be stable in the attack area while still adding above average defenses.  We’ll find out more tomorrow, so be sure to check AetherRose’s Should You Pull article!

WHO ARE THESE GUYS? GARROD RAN AND FA YUIRY?

All right, it’s time for my segment on “let’s complain about Pilot Licenses”, but seriously… If Garrod Ran is an In-Fighter or an Out-Fighter, I am gonna riot.  This guy piloted all three variations of Gundam X (X, X Divider, and Double X), and grew in ability as he gained experience as a pilot. Looking at him as a character, I don’t think he’s really material for a Long or Mid Shooter (watch me be wrong), and Supporter seems off too (though X Divider packs Offense Up and that would synergize well).

If he is a Supporter, we may have a really good shot at a viable one, but let’s face it, he’s going to be another In-Fighter with 1,000 to 1,600 melee attack and a penchant for a shooter Part Trait.  Please Bandai, prove me wrong and give us the GOODS.

Fa Yuiry shores up our 3* Pilot release, and she’s yet another person who piloted the Zeta Gundam.  We really have a lot of these pilots by now (from Mobile Suit Zeta Gundam), and thankfully our last 3* was fairly okay in stats and ability, so hopefully we can keep that trend up here. Though, if this Pilot turns out better than the 4* it’s going to be an awkward situation.

It looks like we’re definitely going to be seeing these in a weekly-fashion, at least for now.  There’s not much to say about these two, except that Wing Gundam will receive the normal Featured Banner rate-up bonuses that you see outside of Sokai Events.  Unfortunately, unlike last week, this week’s rate-up doesn’t have any higher chances at bonus modifier Parts for the Event.  Keep in mind, this banner includes all Parts from the Standard Capsule Pool, so don’t be surprised if you see something not Wing or Grandpa Gundam.

Tomorrow is an exciting day for the game with version 1.2 coming in, and the ensuing Sokai Festival!  Be sure to finish all of your daily stuff before maintenance and spend your energy so you don’t waste any!