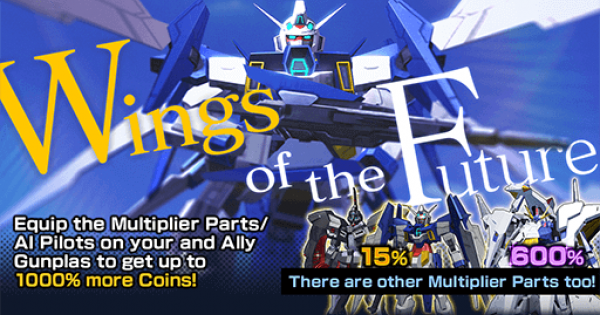 Hello pilots! Welcome back to another weekly event parts review. Today we are covering the Age-2 Normal from Gundam Age. Only the one event suit this week, so let's get into it, shall we?

Low armor, average ATK stats, average DEF/RES except for high Shot DEF, this head comes with the Transformer and For Computer word tags, as well as a trait that reduces shooting damage taken by a flat 20 when using a Technique Gunpla. Not 20%, just 20. So yeah, a throwaway trait, bad word tags and nothing that stands out about the head except having 294 Melee ATK instead of the normal average of 291...but that just isn't worth anything. Pass on this.

Like the head, this sports low armor, above average Shot DEF and average DEF/RES otherwise. It comes with high Melee ATK and average Shot ATK, the Transformer and For Computer word tags again, and a trait that reduces EX Skill CD by 15% when you have the Transformer word tag active. On the one hand, the high 561 Melee ATK is very nice, but on the other...nothing else is particularly good...yet. EX Skill CD is a very powerful trait, and this is an easy source of it, but it requires a bad word tag build and also only affects CD after the first use of the skill, meaning it's not good in Arena. This could see use in the Multi-Missions to use EX Skills more frequently, or if the Arena meta changes, so I would grab this if that's something you want to experiment with. I'd definitely grab at least one if you don't have anything particularly good in the Torso slot for Melee suits, as 561 is even higher than the Sokai baseline of 553.

Low armor, high Melee ATK, average the rest, Transformer and For Computer word tags, and a trait that increases beam weapons' reload speed by 15%. The most I can say about these is that they have high Melee ATK for a 3* piece, and so if you have a very specific shield you want to use then these work as a shieldless substitute to the Artemis arms...but given that the Artemis is basically straight up better in every single other metric I can't give these much of a recommendation. Which is unfortunate cause these are amazing aesthetically. Even the trait that seems good on the surface, is useless in Arena and is on a part that is awful for Shooters. So if you have no better Arms part for Melee without a shield, pick these up, otherwise skip em.

Average stats across the board, Transformer and Protag word tags, and a melee EX Skill that has B+/B- stats, but no dash so not really usable for Arena. Nothing really stands out here except the stats on the EX Skill, pass.

Same stats and word tags as the Legs, what a surprise. The difference here is a trait that boosts Close Shot ATK while your health is 80% or less. This part is okay, in that 294 Shot ATK is serviceable but the lack of tags and needing to be below 80% hurts the trait. It's also a sort of worst case scenario part since you really shouldn't be in Close Shot range as a Shooter. I'd pass on this.

Above average defenses, low Shot ATK, Transformer and Protag, and a trait that reduces initial CD by 12% when you have Transformer active. This is a very hard piece to evaluate. The trait is amazing and the rifle comes with Protag making this a great Melee piece, but you have to activate a bad word tag in Transformer in order to actually use the trait. What makes this even more difficult to evaluate is Arena. See, Initial CD is great for Arena, especially on a piece that Melee users will use since they don't get Magazine skills to skip needing Initial CD, but that word tag requirement, ugh.

That being said, definitely pick this up and max it out if you're a Melee Arena main. I'm expecting it to be useful sometime.

Boy howdy this shield has some stats on it, it sure does. Okay in all honesty the defensive stats of a shield really don't matter much, it's the word tags and traits/EX Skills that are the juicy bits. I will note that this shield does seem to have high Shot DEF though. So let's look at this one. Transformer and Protag word tags, and a trait that boosts Sp Shot Crit Chance by 21% when you're a Middle-Shooter...what? That's such a heavily restricted and insane trait to have on a mostly Melee suit. Especially since Crit is so garbage, that trait basically reads "+2.1% Sp Shot damage", which is incredibly low value and weak even if it wasn't tied to Middle-Shooters only and tied to Sp Shots only. The best thing that can be said about this shield, and the only thing saving it from an F, is that it has Protag on it. Hard pass.

Well, there you have it, all the Age-2 Normal parts reviewed. This is a weird one. It has some really odd standout things about the parts, and then really weird restrictions and combos on others, all coupled with bad word tags. I love the looks of this suit but I can't really get behind the functions of it. Hopefully next week's suit brings us something more spicy.