Gundam Battle Gunpla Warfare: Zeta and Qubeley Tier List - Should You Pull It? 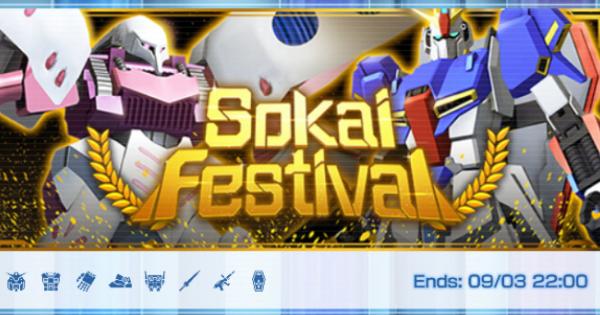 We have a very special guide for you today, written by none other than @AetherRose -- one of our instructors on the Gundam Battle Gunpla Warfare discord server! We're excited to bring this piece to you and help you decide whether or not you should roll on this current banner!

AetherRose did an excellent job at explaining our reasoning and analyzing the decision from a statistical viewpoint (your likelihood to pull an excellent piece out of the 4 star pieces available). So without further ado, let's dive in!

Hey guys! Welcome to the first of what will be a weekly article outlining the new banner Parts and if it’s worth your hard-earned HC or cold hard cash! I want to start this off by saying I really love this community and can’t wait to contribute in a meaningful way, so let’s get right into it!

An EX Skill with D/B- at 21/6 CD means it has a D in Power, B in Piercing, a 21-second cooldown, and it’s available for use 6 seconds after the match starts.

This week is a limited banner, which means it will not be going to one of the Standard Pools when the week is up, it will be out of the rotation.

This banner is held back by having two 4* sets. While the Parts are synergistic with each other, making subsequent pulls better than one-offs, they do not synergize well with existing Parts. The banner as a whole focuses on very high Defenses with many middling EX Skills. It’s clear the Parts are intended for Mid Shooters and Out Fighters.
I would skip.

The Head has slightly above average stats, with a maximum of 2361 S.Atk, which is average, and relatively high Defenses. However, this is offset by the tanky Word Tags and bad EX Skill. There isn’t much to say on this Head because it looks a lot like many Heads we already have.

This Chest is a mixed bag for me. The Armor is fairly high, the Defense values are fairly high, but lacking ANY P.Res is a problem here. It’s not a huge one, but for a Part that’s clearly defensively inclined, it feels very counterintuitive gameplay-wise. This is offset by the EX Skill, which comes out in an average time of 20s, buffs your party for 24% M.Atk and does D/A, resulting in a Part that’s above average, but we’ve definitely had better.

I’m so happy to be talking about a good Part in this limited banner! Here we have Arms with really high M.Atk. Now, it’s not the best, but very few Arms and weapons actually top this at 2528 and it comes paired with the rest of the set’s naturally high Defense values. In addition, it has a D/B EX Skill with 7 Magazine. This isn’t a fantastic EX Skill, as we’ve seen similar Magazine skills from Blue Parts, but it’s a nice addition. Unfortunately, like the rest of the set, this comes with low tier Word Tags.

A team full of Magazine EX Skills is a terrifying thing, especially when they’re explosive rounds, so this is a good Part to get duplicates for.

The Legs have very high Defenses, just like every other Zeta Part, and a decent EX Skill with D/B- at 21/6 CD. The saving grace here is it comes paired with Ace Excel, the best Shooter Word Tag. This is only mitigated by the fact this Part has a Melee EX Skill, although there’s a lot of applications for your build here.

This part works well in Shooter builds for its Word Tag, but for a Melee Gunpla, you’ll want to fuse them together for the EX Skill. 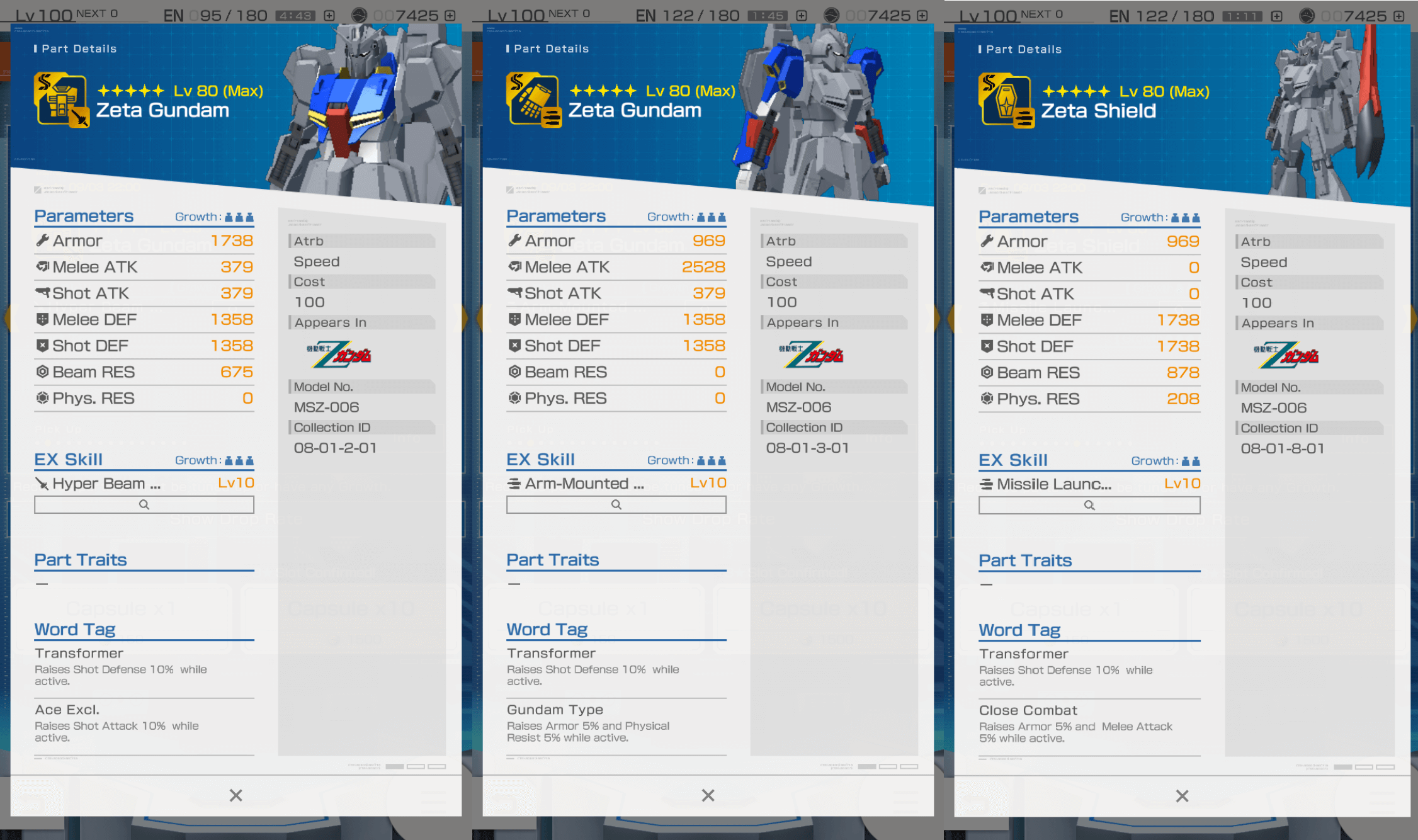 I’m starting to see a theme here. Once again this Part has fantastic Defenses and comes with defensive Word Tags. The real selling point on this Part is the strong passive which boosts Beam Shooting Power by 30%. This is a very solid passive and a great Part for Supporters and Mid Shooters especially.

If you get any duplicates, make sure to fuse them together since the EX Skill is great here.

Even this Melee weapon comes with a well above average Armor boost, and I’m happy to say it’s matched by an above average 3318 M.Atk. This also comes with one of the better Word Tags, especially for a Melee weapon, Close Combat! Finally, to top it off it has a Midling D/B and 21/6 EX Skill. Honestly, there’s nothing bad to say about this Part, it’s just an all around a strong addition to most builds.

This weapon is very confusing to me; it’s just the Beam Saber’s stats except a worse Part Trait. It has the same stats, a passive for boosting Melee damage by 35 when speed type, and it comes with the Long Range Word Tag instead of Close Combat. There are much better Melee weapons for Supporters and Long Shooters, so this must be meant for Mid Shooters.

This Beam rifle is sitting pretty at a good 3318 S.Atk and an impressive 969 Armor. Nice. This rifle has good defensive Word Tags for a Supporter type but the passive 35 damage on Sp. Shot is pretty weak. Honestly, there’s a fair amount of better guns than this.

Once again, this has copied stats from the Beam Rifle [Zeta], but this time it’s paired with a defensive passive that reduces enemy Shooting Power by 30% and boasts High Firepower, one of the better Word Tags. Honestly, this is a great pick for Supporters and slightly better than its copycat.

What sets this Part apart is its passive, making it a very solid slot for Melee Gunpla and Supporters.

Statistically speaking, this is probably the best Shield in the game. There are Shields with higher M.Def or S.Def, but there are no Shields with a solid mix as strong as this one. In addition, it comes paired with Close Combat and a very bad D/C 7 Magazine EX Skill that can at least be used for staggering.

Given how rare Shields, how fantastic these stats are,  and how bad the EX Skill is, you should absolutely keep any duplicates you get.

The Zeta Gundam is blocky, which actually fits a very large variety of Parts, but the overall bulkiness doesn’t work as well given how many Parts are extremely skinny. The Part I love here is the fact it works with a bazooka without looking dumb like some other larger shoulders.

I don’t think I need to say much on this one; it’s an absolutely fantastic Head with Commander and High Firepower, two average Word Tags that work well with Mid Shooter. This is generally the kind of strong and unique combination I look for in A ranked Parts. This could work on basically any Gunpla, but still has a special niche with Mid Shooters.

This Chest has very high Armor and Melee Defense, but generally average stats. The passive buffs your EX Skill effect if you’re a Middle Shooter, which is pretty good, and the Word Tags are average. All in all, this is a slightly above average Part for its passive.

These Arms have an above-average 2138 M.Atk and Defenses. Once again, this Part has Commander and High Firepower Word Tags. I really enjoy the EX Skill on this, which is an A/D with 60/0 CD attack and a massive 11 Magazine and Beam Shot type. Honestly, this is just such a great Part for Mid Shooters, Out Fighters, and the Zeta Gundam specifically.

The Legs are an interesting Part because they come with a S.Atk boost if you’re a Middle-Shooter, which falls in line with supporting the rest of the banner. Legs don’t typically have good passives or EX Skills, so this one is above average. Again, it comes paired with Commander, but this Part instead has High Mobility, which is worse than High Firepower in my opinion.

This Part boasts fairly high Defenses and the quebeley’s signature move--funnels. These are the strongest funnels we’ve seen at A+/D and a CD of 60/6, which matches the Nu Gundam Back. Just an above average Backpack with a good EX Skill.

I mean I guess if you want to look like some weird fat Midget DBZ villain then this is your jam. This also has basically no Part synergy with what’s already out there since it’s wide, round, and bulky. 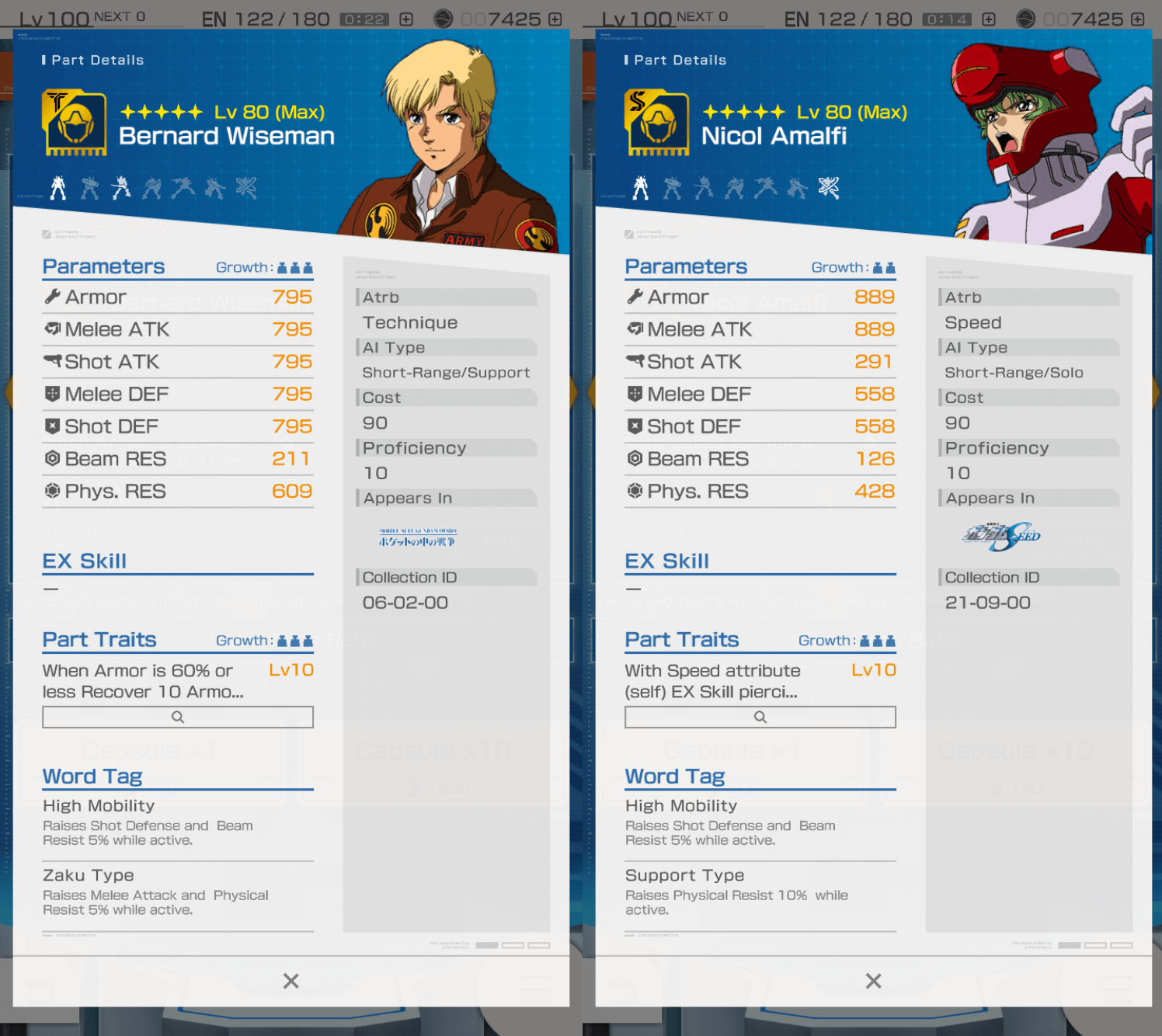 This is a pretty bad banner with two underperforming Pilots.

Say it ain’t so Bernie! Bandai did you dirty! With a fully balanced set of stats and an In Fighter job with the only lean being towards P.Res at the cost of B.Res and an abysmal set of Word Tags, his only saving grace could be his passive. Of course, his passive falls massively short at a 10 Armor regen when below 60% Armor. At 3,000 Armor, this means you heal a mere 0.33%. This one is a hard pass in my book.

Bernie’s AI leads him to support allies when he’s equipped with In-Fighter’s job license, which isn’t really preferable as two Melee Gunpla on the same enemy tend to knock the enemy out of range of the other Gunpla.

Nichol is a Supporter with an interesting stat spread of high Armor and high M.Atk--889 each. His Word Tags are, again, not very good, and his passive is also pretty useless on a Supporter, since most support EX Skills don’t actually do damage and don’t benefit from EX piercing. However, with some intelligent building, you may be able to make use of his passive by playing as her in a Melee-focused Gunpla utilizing high CD EX Skills which also provide debuffs/buffs. Although, even then he’s not even the best in that niche. All in all, I’d say pass on him because there are plenty of better Pilots for player-controlled Gunpla.