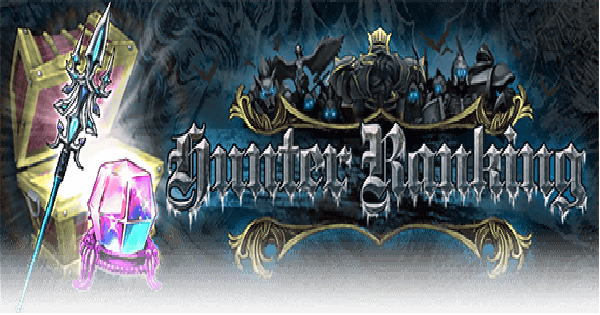 Welcome to a guide for the Nov. 2019 Hunter Ranking event (Ice edition), which will run from Nov. 27 to Dec. 10. This event has no bonus login board of any kind. Additionally there are no costumes or cosmetics tied to your overall rank in this event. That means you can sit back, chill, and play when it's convenient for you!

This article will have three sections:

1) A guide to this specific BH's perils.

The updated, Ice-themed Bounty Hunt map is a perfect fit for wintertime

If you're colorblind, I'm sorry, but this is the "main map" style for this event. The main map here has another variation with different traps- but the flavor of BH is much the same. This event is much, much more labor intensive than Halloween was. The main reason for that is its freeze mechanics. Oh boy I hate freeze. The things that freeze you this time include: the "fire" traps, the wind, the enemy specials and of course, Great Ghost screams. Freeze doesn't always immediately put you in an ice block, depending what hit you. On occasion, mainly from wind, you will instead turn bright blue and be slowed for a time. There is no way to get 100% freeze resist in the game so learning to accept your fate and be frozen is necessary.

Tip: Freezing Winds will not impede your "no damage in first place" achievement for the season, but all other sources of freeze will.

This map has much the same trap layouts as Halloween did with the disappearing and reappearing platforms, falling spike traps and extra "fire" traps. That makes it easy prey for veterans and a kind learning curve for new players- as always, focus on Sarcophagi, Skeleton Boys and Final Guard. New players with lower attack values (less than recommended for a stage) and/or those with an off element main weapon should avoid Cave Trolls. They will kill you unless you can quickly nuke them. Since we have another handy dandy guide detailing Sarcs, Skeleboys and the FG (linked below), why not go over weapon options for all characters?

Alucard- Run the Sabre or Alucard Sword. The hit to your outgoing damage is 20% lost by taking an off element weapon- the exact same Alucard Sword buffs, equalizing it. Rahab's frost, the new 5* sword, is almost the exact same as the Sabre if you only have one copy of the Frost. I would shelf it unless you pull more than one or for some strange reason don't have a maxed Sabre.

Simon- Simon has a bunch of ice options- Rockbreaker for free, the Hydra, Kraken Whip, the new Ice Beater and Dragon's Claw. While Dragon's Claw is optimal for its special and its Clotho typing, Rockbreaker is still a go-to for most Simons.

Maria- Arctic Eagle is your main farmable but chances are you don't have it yet. That leaves you with the BH Farmable Penta the Penguin which isn't that bad. If you want to run off-element Morrigan, you definitely can, assuming you got her from Halloween.

Charlotte- You should probably run the Book of Nemesis in this event. It's just very, very suited to this event. It is BH farmable but if you don't have one yet, use whatever gives the absolute most attack and ignore elements.

Shanoa- The event gives Monody Vitae and we had Grando Duplex added recently as a farmable/gacha scythe. Should you be unable to use either farmable, swap to Tonitrus and equip a lightning main armor for 30% weapon skill damage. If you also don't have that, run whatever you can.

The only cosmetic this time around is an absolutely adorable bow for 1000 medals. There are no skins.

Ahem. The rest of the rewards for trade are as follows:

Suggested order of acquisition: Throw caution to the wind! Get the ribbon first if you want it then dump everything, yes everything, into Monody Vitae parchment. These are worth 100 AA each, even if you are not a Shanoa main. However, I will review the Monody Vitae below for those who are Shanoa mains and are interested in farming the weapon:

This? Free? Yes please! With the availability of parchment off of this for free it went from an "okay" weapon to a "great" weapon! I would recommend Shanoa mains grind this thing out ASAP to as high as they can during the event. It has a heal skill which is… questionable, but with the average Shanoa keeping Anubis and Tonitrus? She really doesn't need a third special.

Note: The ice banner is limited.

So two good passives, one so-so passive and a dead passive with a dead active and the best skill possible for Alucard Gacha. Okay. This sword isn't worth it at 0 LB just because the Sabre exists as a farmable. Should you decide to take it to 1+ LB, it is worth it. Please weigh your options carefully.

Uuuugh… this works for a mono ice build but that is, quite literally, the only time I would condone using this. Its special is the worst of the gacha style for Alucard and its active only favors true ice builds, but it does synergize with the all important Eversing Gauntlets for ice. Don't roll for this but take it as a consolation prize. Only LB if you get four total copies and can +3 it.

Clotho ice weapon? With a good skill? And… some questionable passives. But that's okay because Simon sorely needs options for Clotho Ice. His only other is Queen's Pride, a Def Up special. This isn't the best whip but it's better than the alternatives.

Don't roll intentionally for this. I'd not take it over a maxed Rockbreaker, which is free. This is limited, you aren't going to be getting a bunch of copies of it outside of this banner. Overall it's not worth your gems.

Note: The 50% Off 10 pull banner accepts free gems. You can only pull on it once.

1500 gems for a 10 roll, with a guaranteed 4* in the mix? I'd take this regardless who you are. There are no rate ups whatsoever in the gacha pool and there are no limited items.