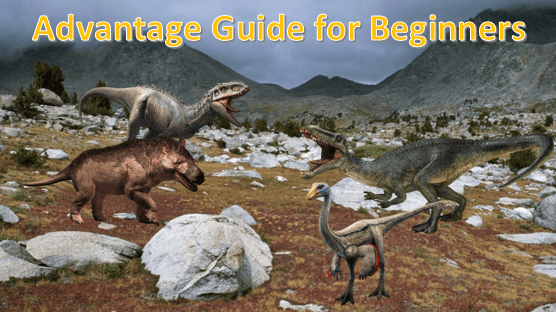 Tournaments are every week. Anyone who plays a little bit of the game knows there are 2 different types of tournaments: skill and advantage. Skill is more simplistic as there are only a few different creatures that can really succeed in the overall meta. However, in advantage, the name of the game is changed. Different levels and boost spreads mean some people will do better than others almost every time, hence the name. So, for you newer players who dread these events, do not fret. I will help you decide which creatures to focus and level for these tournaments.

For advantage tournament beginners, you want to find creatures that meet some requirements that will make life easier for you. If they meet all 3 of these categories, heavily consider them. If they meet only 1 or none, I would advise against them for now. So, let’s move onto out first category.

First up you want to find a creature that is strong. You don’t want to be running Tenontosaurus in a rare advantage where creatures like Gorgosaurus, Suchotator and other better rares are running amuck. You want to look for something strong, especially in a boosted environment. You pick something like Postosuchus, you just wasted your time, coins, and boosts. Ask around your alliance or other players to find out which creatures are going to do well, and which ones are going to fall flat.

Next, you want to find something that is going to be easy to level while also being strong at the same time. Suchotator instantly comes to mind because it’s just 2 commons. The same goes for Purrolyth, Diplotator, and Einiasuchus. They are easy to fuse and level (while also being found in the wild), while also being strong creatures in battle. Other creatures that are easy to level include some nonhybrids that are all over the place. For me personally, I live near a university, and Spinosaurus litter the map. I can log in and see 10 Spinosaurus just on an average day. You want to find something readily available. If you want to go for say, Brachiosaurus, that’s great. It’s a solid creature. The problem is, you’re not getting that much in a short time. That’s a long-term goal you can definitely shoot for if you’d like. But if you want to get things done fast and get your feet into these tournaments ASAP, event exclusives like Blue and Nasutoceratops are not the creatures to really shoot for.

Finally comes hybrid trouble and arena teams. There are some creatures that do really well in an advantage tournament, but their ingredients are also used in a better creature. One of the best examples is anything that isn’t Scorpius Rex gen 3 or Indotaurus that also uses Carnotaurus DNA. Scorpius Rex and Carnotarkus are both really good picks in a legendary advantage, but they use up precious Carnotaurus DNA that may be better off going towards its unique hybrids. The same goes for hybrids that just have better hybrids. Ankyntrosaurus is a sleeper pick in legendary events with its bulk and anti-flock abilities. However, Ankyntrosaurus makes Trykosaurus, which is just better in so many ways. You want to find something that is strong but also doesn’t really require anything that can go up to a higher creature. With fierce in a bad spot in the upper arenas, one could say that Thoradolosaur is not that great. However, Allosinosaurus can be an absolute menace when boosted as is easy to level as it’s a common epic and a common. Or you can also go for another format with Sinoceratops. Sinoceratops really appreciates a boosted arena and can really work around some of the more terrifying threats like Woolly Rhino.

Best Creatures to Start With

Those are the 3 main categories you want to look for and check off. If you can only check off one category, maybe save that project for later. 2 is not bad, but if you can check off all 3 of these categories, those projects should be your focus. Now, what are creatures that really check off all three of these requirements? If you are shooting for rares, there are a couple creatures that can help you out. First up you have Giraffatitan. With great stats, a good moveset, a good resistance set, and a powerful boost spread, Giraffatitan is an excellent rare to work on. Nodopatititan is unfornutaely not the best creature in the meta as of now, and Giraffatitan is a zone 1 spawn. It is easy to acquire, strong, and doesn’t really interfere with any strong uniques. Another rare that checks all 3 is also found in zone 1. Megalosaurus is a rare that can really lay the hurt on anything, especially with the setup. With shields, ferocity, and the counter, Megalosaurus is a pain to fight. And when you go all in on hp and attack, it is a hard beast to take down. And fortunately for Megalosaurus, Megalosuchus is pretty lousy at the moment, so that means it may be better to just level up this ferocious rare. You have other great options for rares as well. Diplotator may not be the best rare, it’s still pretty good. Not only that, but it is easy to level up and also has a hybrid that isn’t that great in Scaphotator. The same could be said about Scaphognathus. While an exclusive now, it was pretty common before being made exclusive, and many of you may have some stockpiles of it. Scaphognathus does take some mastering compared to the other linear playstyle of some other creatures. Ornithomimus is in the same boat, being considered as better than its hybrid Procerathomimus. With great output and synergy as well as high speed, Ornithomimus can make an impact in events well beyond its rarity. Andrewsarchus is another favorite rare with its great stats and abilities as well as it is easy to obtain and it has lousy hybrids with only Andrewtops being better than Andrewsarchus itself, and this unique is still pretty bad.

For epics, there are some more options. Some epics are superhybrids, and those epics can be great for leveling up. With the exception of Scaphotator, all of the epic superhybrids don’t really compete for resources with higher creatures, are pretty solid in their formats, and have ingredients usually readily available. Sarcorixis and Ankylodicurus do somewhat break a rule each with Sarcorixis’s component Sarcosuchus being exclusive and Ankylodicurus breaking the rule about uniques as it shares Doedicurus with Megistocurus, who will probably get a unique down the line. As for the epic hybrids, most are some creatures you should avoid as a beginner. There is only one that can really fit all 3 of these categories. Amargocephalus is better than Tragodistis in battle, can deal with the flocks pretty well, and is easy to farm and level up with only a common and rare needed. Others are good, but their components can be used elsewhere like how Velosrachous takes away Phorusracos from Phorurex, or how Dimodactylus eats up Tupandactylus when it can go towards Poukandactylus. And some like Indominus Rex gen 2 and Scorpius Rex gen 2 just make better hybrids like Indotaurus and Scorpius Rex gen 3. For epic nonhybrids, there is a bit more diversity to pick from. Going back to Sinoceratops, with it being a common epic, strong in a boosted environment, and having hybrids that are mediocre in the arena, you can choose to just level it up (or a hybrid of it). It’s a swapper that can leave the field after a turn, and can really cause some problems for an opponent. Another great epic to consider is Erlikosaurus. Erlidominus is not that great, and Erlikosaurus can be scary in a boosted environment with its good output and high speed. On top of that, its everywhere and hits all 3 categories. Another epic that you could consider is Stygimoloch. It does have Tuoramoloch, but if you have a good alliance that can provide one in raids, then Stygimoloch checks off all 3 of these categories. The last one to consider is Tyrannosaurus Rex. Trykosaurus and Indominus Rex line OK, but there are better options. However, Tyrannosaurus at 142 speed is scary to any player, and should be handled with care. And with it being a global 24/7 epic, maybe Tyrannosaurus Rex is what you need. Similarly to Scaphognathus and Ornithomimus, Baryonyx is an epic that was in the wild but is now exclusive. However, Tryostronix is OK, so while it could go towards something better, the hybrid is only slightly better. And with a good boost spread and past availability, Baryonyx is an epic that may be what you need to kickstart your epic advantage team.

Finally, we have the legendaries. You also had this problem with epic hybrids, but this issue is more prominent here. There are many legendary hybrids without super hybrids. Eremoceros, Megistocurus, and Dodocevia are all really good legendaries, but with the lack of a unique, it may be best to hold off on some of these. However, Indominus Rex is a legendary with 2 uniques, and both of them are kind of bad. Tyrannosaurus and Velociraptor are easy to obtain, and there is also a raid for Indominus Rex. With great stats, a big resistance set, and a great boost spread, Indominus Rex is just better than its hybrids. And going back to the Thoradolosaur line, Allosinosaurus could be another great option for you. With a scary boost spread and components that are common to see, Allosinosaurus is a great legendary to work on. Dracoceratops is one of the most common hybrids in any legendary advantage tournament because of its reign of terror before it lost the rampage on the swap. Still, it remains as a powerful creature on the swap as well as on the field. However, really level this guy up if you have enough Dracorex gen 2 left for Phorurex. As for legendary superhybrids, not many really fit these categories all that well. Some great picks like Enteloceros and Indoraptor gen 2 are really good in their environments, but both have components that could be on creatures much stronger than they are. Monostegotops is another great creature to consider. However the Monolophosaurus DNA could also go towards Scorpius Rex, but then that uses Carnotaurus DNA that can go towards the unique Carnotaurus hybrids, putting Monostegotops in some sort of limbo. However, it will still make an amazing addition to your advantage team if you choose to spend your Monolophosaurus DNA on it.

That’s really it for this beginner guide. As you progress throughout the game, more creatures like Eremoceros and exclusives like Woolly Rhino become more available to you. And when it comes to advantage creatures, remember there is always a risk involved. I don’t think anyone imagined Purutaurus getting another hybrid, but here we are with Purutaurus having 2 hybrids. That’s why you want to get something that is easy to find and/or level to help negate those risks. Nerfs are always bound to happen so again you have to keep that in mind as well. Luckily many creatures fly under the radar and will serve you for a long while on your advantage team. But with exclusive DNA as a prize in these tournaments, advantage creatures are an investment that can return profit in no time. Hopefully this helps. Happy playing and don't forget to join the discord server for more JWA content.