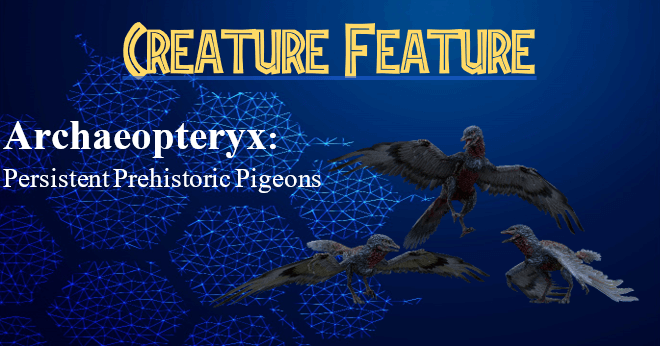 Well, it seems like its time for another flock this week, but this time it’s quite possibly one of the most important creatures ever known in the fossil record. More important than T. rex, Spinosaurus, Mosasaurus, Woolly Mammoth, Megalodon, Smilodon, or Velociraptor. Today I’m discussing the tiny bird known as Archaeopteryx, the “missing link” that helped solidify the theory that birds are indeed the descendant of dinosaurs, and after 150 million years, it finally flies again in Jurassic World Alive. But, is it as important in the meta as it is in the fossil record? Let’s find out.

Let’s first start off with the stats unboosted. And when you look at the stats, you see the hp and immediately think it’s going to struggle. 3300 is pretty low, and the only way you’ll get by with lower hp is to have insane resistances and big damage or speed like Ornithomimus. But it doesn’t. It has 127 speed which is somewhat slow for a fast creature. Has the same attack as Elasmotherium, not even coming close to other big threats like Ornithomimus or Albertosaurus or even Andrewsarchus. It lacks stun immunity. It even has a move that was made to be strictly worse than another move that does the same thing in Delayed Cunning Rampage. Something this frail should never be able to get the rampage off without a miracle, but it has an ability up its sleeve: absorb. This allows it to tank hits while not taking that much damage itself. And while it IS weak to stuns, it is something you do NOT want to swap in on because it has on-escape evasion! So not only are you dodging now, but you also rally heal, making that progress go to waste.

When it comes to the arena, let’s just say Archaeopteryx has no place in there at all. With Testacornibus dominating the arena and Skoonasaurus being able to just 1-shot it, Archaeopteryx can really only succeed in lower arenas, especially ones ruled by fierce. And with something easy to level like Thoradolosaur having a stun move, it can still be a bit rough for Archaeopteryx. But it’s not that much of a surprise that a rare cannot keep up in the upper levels, but you also have tournaments, and this is where you’ll see Archaeopteryx 99% of the time.

So, let’s talk skill tournaments. Archaeopteryx will rarely make an appearance in higher-rarity events like unique and legendary tournaments, but it’s not that big of a deal for a rare to struggle with legendaries and uniques. Now what about epic and rare events? Luckily, we had a nonhybrid rare and epic tournament the other week, and let’s say Archaeopteryx was one of the better rares around. It’s role in the meta really made it shine, as well as hurt it quite a bit. First up, it slaughtered fierce creatures. The only fierce that stood a chance was Albertosaurus, but in order to actually win, it needed to get lucky several times. Not to mention it didn’t want to risk swapping while Archaeopteryx had the ability to come and go whenever it wanted in that scenario. It, along with a certain epic flock really pushed fierce out of the meta, which lead to problems for it. When people realized fierce were not good options, they started swapping to resilients. Brachiosaurus and Diplodocus became big faces, and the flocks eventually made Scutosaurus, in my opinion, the king of the tournament as the only decently good counter was Albertosaurus. So, Archaeopteryx did its job so well, that it pushed itself out of the meta. I almost considered dropping Compsognathus because cunnings were struggling in the meta of Scutosaurus, Brachiosaurus, and Diplodocus among other resilients like Titanoboa and Woolly Rhino. And in a boosted environment, I am not sure how well it would do, so I asked my friend IDGT from ApexPredators if he had it at level 30 and boosted up, and luckily he had it ready to go. He told me it was good at first, but resilients once again started to take over and Archaeopteryx sadly fell from his team. And while we have never had an event with hybrids, with Sarcorixis being able to stun it and deal enough damage to kill a member every turn, as well as other threats like Thylacotator, Erlikogamma, and Scutosaurus (again), Archaeopteryx will not do so well. Now what about a rare only event? While Dracorex and Suchotator could be an issue, the fierce-heavy meta could allow Archaeopteryx to thrive. And with the resilients being subpar with a few exceptions, Archaeopteryx doesn’t have to fear getting walled by big tanks. And for an advantage setting, Archaeopteryx COULD fall off a bit with big Compsognathus gen 2, Suchotators, Dracorexes, and Nasutoceratops coming into play, but with big Andrewsarchuses being a common creature, as well as other big rares like Marsupial Lion, Archaeopteryx will still be a creature to fear and consider.

How do you play with Archaeopteryx? Well, it does best with a setup to help get delayed cunning rampage up and to activate your evasion. That way you can buff your critical hit chance to do even more damage on the rampage. And if you use it later in the match, you could put your opponent between a rock and a hard place by making them lose progress on an entire member. However, unlike Compsognathus, Archaeopteryx has a major flaw in its kit: the inability to rally heal whenever you want. If you want to rally heal as Coelurosauravus or Dodos, you can. With Archaeopteryx, you can only heal when they swap, so unless you can predict a swap, odds are you won’t be swapping as much as you would with say Compsognathus for example.

At the end of the day, Archaeopteryx is still a very good pick and can be used at many different times in battle. You can use it as a starter, a revenge killer, or a closer. When it comes to rares, Archaeopteryx is at the highest end. When it comes to cunning rares (and Rexonthebeach’s Temerity would agree with me here), Archaeopteryx is one of the 3 best rare cunnings with Ornithomimus and Compsognathus gen 2, as well as a higher end nonhybrid. While it may have fallen off a bit in the last tournament, it is still an amazing and unique creature to consider. So, did it have as big of an impact in JWA as in the fossil record? I would say yes in the lower rarity events, even though that impact helped push its usage lower because of how well it did its job. Tune in later for the NEXT rare featured as part of this poll as well as next week where the theme will be quite…bright. If you want on what creature you'll see next week, click that discord link below to cast your vote. Have a good week and see you next time.