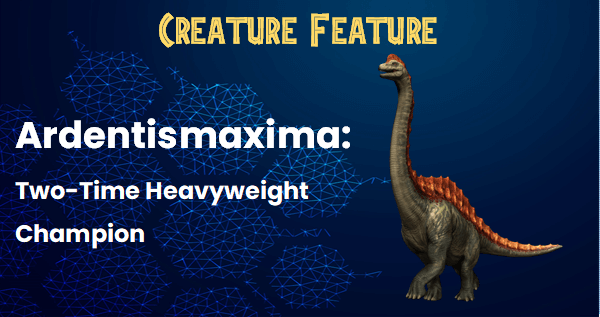 Way back in the day at around patch 1.9, there were 3 creatures that ruled the roost. Geminititan, Indoraptor gen 2, and Ardentismaxima. Out of those 3, Indoraptor gen 2 was the speedster with the insanely good (at the time) cautious strike, Geminititan just got immunity and was the 1v1 king, but many considered Ardentismaxima to be the best due to its constant output of decelerating impact into definite rampage. However the immunity came and went and creatures underwent some changes when 2.0 came around. At the start of 2.0, the dust began to settle and who was the best in the game? Ardentismaxima rose back up to power to be the undisputed king of the meta thanks to its insane bulk and great resistances and immunities. However over the year things have changed and Ludia has given and taken some things from Ardentismaxima. So, is it still able to compete with the big boys or is it retired from the meta? 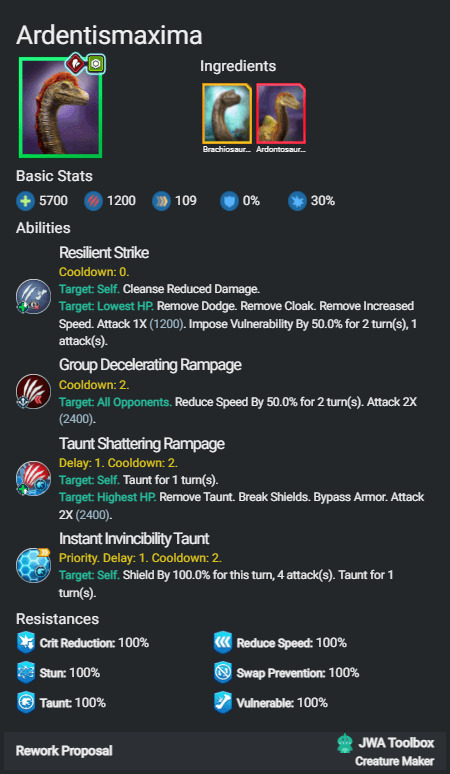 When you look at Ardentismaxima, you realize the striking resemblance to another unique sauropod: Geminititan. However, Ardentismaxima almost always gets the shorter end of the stick. Both have resilient strike and group decelerating rampage. However Ardentismaxima has taunt shattering rampage, which is good for raids. However in a pvp environment, it is a defense shattering rampage with an extra cooldown. Geminititan meanwhile has a much better move in definite shield advantage, which does the same thing, but gives it a shield and removes dodge. Now as for their invincibilities, it's arguable as to which is better, but instant invincibility taunt is a nice move to have for protection. As for the resistances, ardentismaxima has some great immunities with vulnerability, slow, and stun immunity, but compared to its counterpart Geminititan, it loses out a bit as Geminititan trades vulnerability immunity for a resistance while gaining distraction resistance. And when it comes to difference in stats between these 2, the stats aren't that different. Ardentismaxima trades some attack and speed for hp and critical hit chance. Howwever in the end, that small hp boost rarely makes a difference as does the critical hit chance, but at least it makes them somewhat different.

When it comes to boosting, any creature can change. Ardentismaxima is not immune from this fact of the game. While I used to use Ardentismaxima, I also have Mattylus here to help me inform you about it in the arena to see if it is something you should consider leveling up.

What is Ardentismaxima's best boost spread?

Mattylus and I agree that you want some speed on Ardentismaxima. Shooting for at least 115 is a safe bet to outspeed some creatures like base speed ceramagnus as well as a slowed down bulky Spinoconstrictor. Next up is high attack, which can be made more threatening with that critical hit chance. Ardentismaxima is already got a lot of hp, so while it isn't as important as attack, it's way more important than speed and it should be sitting at around 9000 hp.

What are the biggest strengths of Ardentismaxima?

First up is the high base stats. That hp can become a real problem for some creatures that deal more chip damage at first like Testacornibus. It can take a few blows while dishing out back-to-back rampages. Another boon it has is that it has immunity to everything except distraction, bleed, and rend, which is one of the best resistance sets in the game. And that vulnerability immunity really plays nicely with all the bulk it has. It also has a great 30% critical hit chance which can always throw an opponent off and come in clutch for some scenarios. Finally, it has a very cyclic moveset. It can double rampage and then shield, and then repeat this over and over.

What are the biggest weaknesses of Ardentismaxima?

Ardentismaxima has great strengths, but also has a few major weaknesses. First up are cunning effects. It does have resilient strike to help with these effects, but it has to waste a turn using resilient strike, which could allow for an opponent to cycle around to a big move to take you down. Mattylus says that the lack of distraction resistance is probably its greatest weakness, which is funny because when it was really nerfed over a year ago, that was something that was taken away from it. Also, it has no way to combat bleed and rend, which allows creatures like Indotaurus and Grypolyth to eat it alive. Also, a creature like Ardentismaxima is very prone to getting swapped on, especially by something like Phorurex, who can take away 40% of Ardentismaxima's immense bulk in one swap.

What future do you see for Ardentismaxima?

Ardentismaxima is in a really rough spot right now. There are just better fierce resilients around like Grypolyth and even Stygidaryx. Not to mention the fact that there is no point in using Ardentismaxima when Geminititan can do the same job but can also work around distraction and dodge much better thanks to its resistances and definite shield advantage. And both are made even more irrelevant thanks to Skoonasaurus. There is very little reason to level up Ardentismaxima unless you have nothing that can fit the role better, and until there is some sort of major shakeup in the meta, Ardentismaxima won't see much playtime at all. Mattylus says that the reasons for leveling Ardentismaxima will have more to do with raids than the actual arena.

When it comes to Ardentismaxima in battle, it can be used at almost any time and perform pretty consistently, which makes it a good lead. That way you can not only have a chance of taking your opponent's lead down, you can also see what they are trying to set up or go for. And if Ardentismaxima goes down, it will at least have done something to the enemy creature to potentially set up something like Testacornibus for a sweep.

That's Ardentismaxima. It's a creature that's in desperate need of an upgrade as it's just living in the shadows of the other 2 unique sauropods that just do its job better. It does have a perk here and there, but this doesn't make it relevant in the slightest. However, if there's one creature that can easily return to the top of the totem pole, it's Ardentismaxima, so we'll need to see what Ludia does next. Thank you all for reading and tune in tomorrow for the next creature feature.