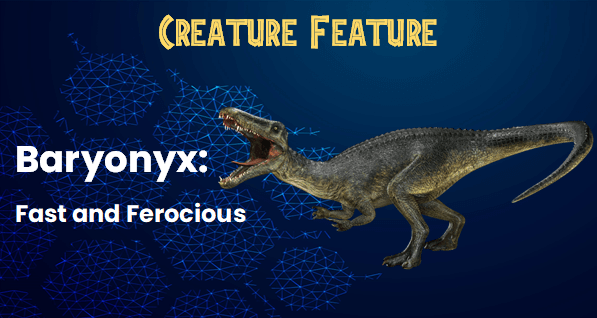 There are many epics in the game. Some get a lot of attention. Woolly Rhino, Compsognathus, Argenteryx, and Megalotops are creatures that always stand out in an epic environment. Then you have creatures that stand out for being really bad like Aquillamimus, Spinotahraptor, Ouranosaurus, and Scaphotator. However many epics are just average, and while it was a better epic in the past, Baryonyx finds itself here. It's not the best, but it's still really good. So, why is that? 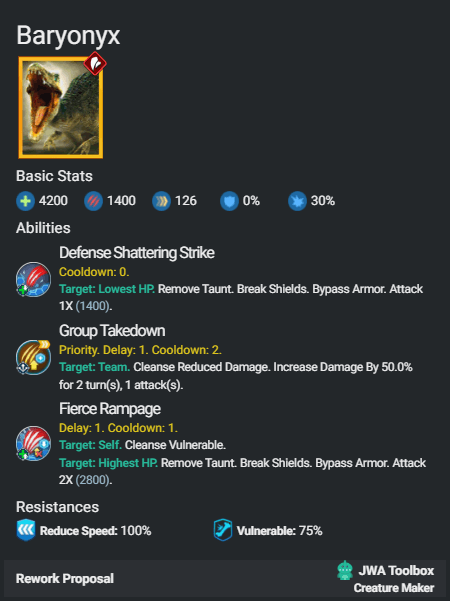 Starting unboosted, let's look at the stats. It's good a solid 126 speed, which is pretty darn good for a fierce creature. It also has a solid attack stat with 1400 attack which is made more potent with a 30% critical hit stat. And it's hp is also solid with 4200 hp. As for the moveset, it's got defense shattering strike and fierce rampage to deal a lot of damage to the opponent. Unfortunately it was given group ferocity, which is a worse version of ready to crush. This really means that Baryonyx is a setup creature. Revenge kill with a strike and hit hard with the rampage. As for resistances, Baryonyx has a deceleration immunity as well as a 75% vulnerability resistance,  allowing it to deal with many resilients. This is a solid nonhybrid fierce creature.

Boosts are always changing the name of the game. Creatures can have power levels that drastically change when they are introduced into an environment. Sometimes it’s good, and sometimes it’s bad. Luckily, as someone who is crazy enough to bring Baryonyx into the arena, I know a thing or two about it. So here is some boosted info on this European Spinosaur.

What is the best boost spread of Baryonyx?

Speed and attack are key. Mine sits at over 150 speed with over 2000 attack. That way I can better set up while outspeeding almost everything. I can outspeed any Thoradolosaur or Trykosaurus, most Phorurex and Quetzorion, and every good Testacornibus build. And in advantage tournaments, this allows me to take down those speedy Andrewsarchus as well as take on those nitro Sarcorixis. Hp isn’t bad to invest in, but Baryonyx benefits more from these.

What are the biggest strengths of Baryonyx?

That high fierce damage combined with the high speed make it a lethal fierce creature. Most fast fierce creatures rely on rend or bleed to get some major damage going, and many creatures can resist both, but Baryonyx just does raw damage, which has its pros and cons. But with a high attack and speed stat when boosted combined with a setup, nothing wants to take that kind of hit.

What are the biggest weaknesses of Baryonyx?

There are 2 main creatures that can just screw over Baryonyx: Phorurex and Scorpios Rex gen 3. Both can easily swap in on Baryonyx and kill it. It also can be hurt badly by flocks like Argenteryx and Compsognathus. Really anything that involves a cunning effect or a stunning move can just really screw Baryonyx.

How far will Baryonyx get you?

You’ll probably not see a Baryonyx in the Gyrospere Depot. I’m not surprised if I’m the only person in Lockwood Library that runs it. In order to do well in the library, it needs some serious help from its teammates. As for an advantage tournament, it’ll do much better against common threats like Scutosaurus or Andrewsarchus, although when hybrids are introduced into the meta, creatures like Megalotops or Argenteryx ruin it again. It’ll get you decently far, but it’s not the furthest an epic can take you.

When it comes to using Baryonyx in battle, you have to set up with it to really optimize it. With a setup, creatures like Antarctopelta, Diorajasaur, or Testacornibus can get wiped off the face of the earth.  It can do alright without the setup, but it's taking massive damage in return. But with the setup, not many creatures are safe.

That’s Baryonyx. It’s a great epic for advantage tournaments, although it won’t get you to the Nublar Shores anytime soon. It’s got great output, great speed, and a good niche in the meta as a speedy chomper. Thank you so much for reading and tune in tomorrow for the next creature feature. And good luck in the tournament tomorrow. Happy Playing.