Carnotaurus: Mess with the Bull and You Get the Horns 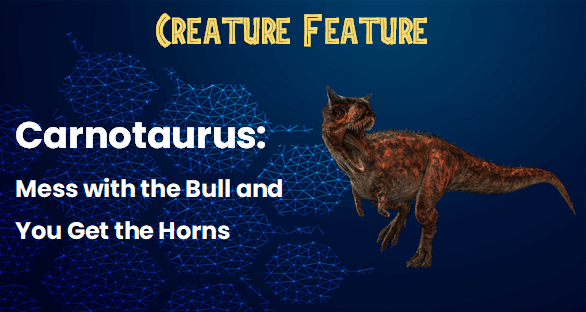 When it comes to dinosaurs with tiny arms, T. Rex is the go-to dinosaur. However, if there's one dinosaur with tiny arms that would give T. Rex a self-confidence boost, it's Carnotaurus. Despite the tiny arms, Carnotaurus is one of the most beloved theropods in the media due to its speed, bumpy skin, and those impressive horns. It's no wonder why it was the most hyped up dinosaur in the original Fallen Kingdom trailers. So, does Carnotaurus strike fear into the JWA meta like it did to the protagonists in Disney's Dinosaur, or does it fade into the background like in The Lost World? 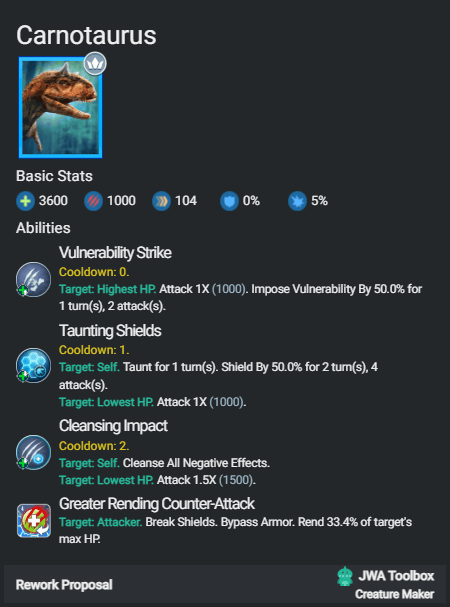 Starting unboosted, Carnotaurus has below average stats. 104 speed is quite low, 1000 attack isn't unusual, and 3600 hp isn't that special either. It's moveset is also ok with vulnerability strike, cleansing impact, and taunting shields. Carnotaurus's main gimmick however is the greater rending counter, which becomes even stronger with vulnerability. However, due to its poor bulk and speed, Carnotaurus can't really get that far despite this amazing tool. Odds are it gets one counter off before going down. This problem isn't helped by a major lack of resistances. So some big beefy creatures like Diplodocus can easily get the jump on it. In almost any unboosted setting it's in, it never does well with all these setbacks. There are worse out there, but that doesn't make Carnotaurus good unfortunately.

What is the best boost spread for Carnotaurus?

DinoMatt actually had an interesting spread for his Carnotaurus of 10/4/16. He explains that you have to be fast to get that shield up, otherwise you are a sitting duck die to the low hp on Carnotaurus, and this also explains the attack as well. But you really want to focus speed and hp to have an effective Carnotaurus.

What is Carnotaurus's biggest strengths?

Obviously the greater rending counter is the biggest strength it has. Something like a Diplodocus with 10,000 hp can lose so much of that in a second, especially if it were to swap in on a vulnerability strike. These two together are a dangerous combination that is a recipe for pain. And with the counter being so strong, it can be used as a secondary swapper because, against most armored creatures, this thing is doing more than Dracoceratops on the swap. Also cleansing impact helps get rid of nasty status effects, which creatures with counters are especially vulnerable too.

What is Carnotaurus's biggest weaknesses?

Despite its menacing appearance, it has some major weaknesses. First up is how fragile Carnotaurus is. For it to deal big damage, it relies on getting hit, and with a low hp stat like the one it has, it can't deal much damage at all. Then you have the speed stat, which doesn't allow Carnotaurus to get that setup, and this means that usually it's going to take a hit before dealing any damage in return. And this means that it rarely gets to use vulnerability before the counter, limiting the output again. It lacks non-counter output, is slow, frail, and lacks resistances, and this really hold it back.

What future do you see for Carnotaurus?

DinoMatt said it's obsolete right now and can really go up from where it's at. There are worse rares out there, but Carnotaurus isn't turning heads anytime soon. DinoMatt said just don't waste your time on the rare and to go for the beastly hybrids.

When it comes to using Carnotaurus in battle, DinoMatt says he uses it as something to set up a swapper with or to use it as a swapper. It can also work with a shield setup, but again with the fragility it doesn't take a 1v1 too well. DinoMatt says that he likes using it as a swapper, but it's usually toast after a hit. So just like its strengths, Carnotaurus's versatility in battle is also pretty limited.

That's Carnotaurus. It unfortunately does not do well in the game at all, and this fan favorite deserves better. Odds are you'll never see a max boosted Carnotaurus in battle as there are just much better options for rares or even rares with counters like Megalosaurus or Purrolyth. Heck, even my personal go-to people for obscure level 30 boosted creatures IDGT and Practicekat didn't have one, so you will only really see them on lower ranked advantage teams. This South American star deserves better. Thank you all for reading and don't forget to dart your sauropods. See you tomorrow.