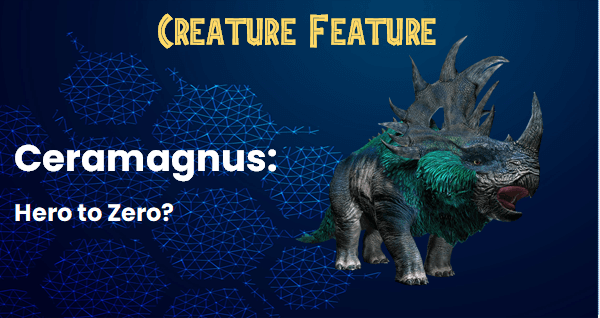 Over a year ago, there was one apex that was released that made people fear for their lives. Ceramagnus was introduced with some decent resistances, good bulk, high base damage, and swap in stunning strike and was instantly deemed the best in the game no question. When it was obtained by people, things did not change as Ceramagnus began taking over many arena teams and could sweep some teams in higher arenas. However, after a year, is Ceramagnus able to still hold up in the meta? 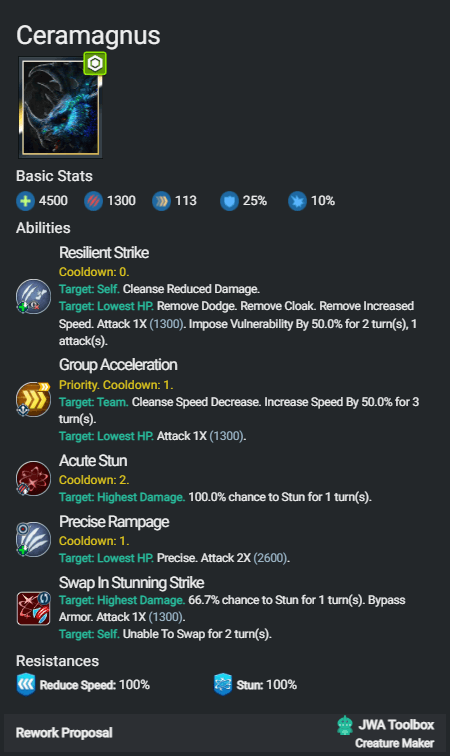 Starting unboosted, Ceramagnus has seen some changes since it was first released. Its attack once stood at 1500, but it has been reduced to 1300. And to hurt the output even more, the critical hit chance has been slashed from 20% to 10%, which isn’t major, but not great for it either. The hp has remained the same, but the speed has also been reduced to 113, now allowing creatures like Gorgotrebax to outspeed it. The hp stat remains the same, but the armor stat has also been lowered to 25%. As for the immunities, it still retains its stun and deceleration immunity, but originally had its vulnerability immunity reduced to 50%, and then it was taken away altogether. The moveset hasn’t changed since its release. Precise rampage is a great turn 1 option, but it also has another good turn 1 option with group acceleration. This priority strike allows it to gain a 50% speed boost, which is good combined with that deceleration immunity. Resilient strike is a decent move that allows Ceramagnus to take care of some pesky cunnings. Acute stun is probably the weakest move in the kit, but seeing as Ceramagnus lacks a cleansing move, it’s a great stall tool to get rid of the pin after it swaps in. Ceramagnus has access to probably the best swap move on a creature right now with swap in stunning strike. This allows Ceramagnus to bypass armor and potentially get a free swap. While not a bad creature, these many nerfs have definitely taken its toll, and with the meta becoming more anti-swap with Indotaurus and Phorurex being one of the few creatures to mess up swappers, Ceramagnus is struggling a bit in an unboosted environment.

Boosts can always propel a creature from mediocrity into the spotlight and vice versa. Ceramagnus is not immune from this fact. These days, it’s harder to find people running Ceramagnus, but thankfully I have tomz89gta and bbb23 from Jurassic Squids to help me out today. To see if you want to level up Ceramagnus, I asked them a few questions on it in the arena.

What is the best boost spread for Ceramagnus?

What are Ceramagnus's biggest strengths?

First up the obvious strength is the swap. Potentially swapping in for free is never a bad thing, and Ceramagnus can do just that pretty well. And even if you cannot kill something on the swap, a tier 20 attack Ceramagnus isn’t going to give an opponent a love tap. It’ll hurt. As for its presence on the field, ceramagnus has many different options that allow it to handle a wide variety of scenarios. For cunnings, it has ways around evasion and distraction with resilient strike. It can also use a rampage right after it swaps in while also bypassing evasion in the process. To pick off a faster creature, it can use group acceleration to get the jump on faster creatures and hit them hard. And if it’s stuck on the field, it has acute stun to hopefully get it out in a pinch. Ceramagnus also has some decent matchups like Phorurex according to both tomz89gta and bbb23. And if a stun lands on something like Phorurex, a match can turn in an instant.

What are Ceramagnus's biggest weaknesses?

Ceramagnus has some major weaknesses. First up, being a swapper, it wants pin immunity or resistance, and has neither. Also nowadays, there are many creatures that can really punish swapping like Testacornibus, Indotaurus, and Phorurex. It also is just susceptible to many top tier creatures despite its diverse kit. Creatures like Spinoconstrictor, Antarctovenator, and Skoonasaurus can just eat away at Ceramagnus, and if it can get taken down in two turns, it has to accept it. Also it just lacks resistances. Deceleration isn’t helping that much and while stun immunity is always good to have, it isn’t enough by itself. It needs ways to get around pin as well as other common negative effects like bleed and vulnerability.

What future do you see for Ceramagnus?

Both tomz89gta and bbb23 told me the exact same thing. If a boost shuffle or reset rolls around, it’ll probably disappear for the most part. There are 3 better creatures that also have damage on the swap that do Ceramagnus’s job better. Monolorhino has the immunities and defenses, Parasauthops has the raw output and great offensive pressure, and Phorurex is a beastly revenge killer that has team synergy while running as well as an on escape that pins and attacks. Ceramagnus is just outclassed by all 3 of these guys as well as other resilients like Skoonasaurus or Testacornibus. Bbb23 and tomz89gta both say they want Ceramagnus off their team and are only running it to not waste those boosts.

When it comes to Ceramagnus in battle, you obviously want to use it as a swapper. Both bbb23 and tomz89gta both said they like to use it for the mid or late stages of a battle when Phorurex usually rears its head up. It can use its tools to take down one that is relatively fresh and not about to run away. Both said it can also be used as a 1v1 creature, but that is far more situational. While it is a good swapper, again both tomz89gta and bbb23 said it’s not as good in the meta anymore and that it’s more situational compared to other swappers.

So that's Ceramagnus. It has definitely fallen to the wayside over the last year and is a shadow of its former self. Mowever many swappers are now finding it harder to keep with with all these on escape abilities so it's possible that old Ceramagnus still wouldn't be as good. I thank you all for reading and make sure you tune in tomorrow to see what the next creature feature is. Also don't forget to get those final battles in for the rare tournament. Happy Playing.