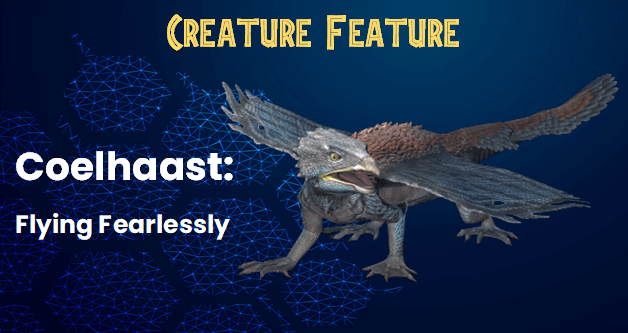 Flocks were a game changer in JWA. If there is one thing that all flocks have in common, it’s that they have high speed. Sure, the Dodos are on the slower side, but 123 is still nothing to sneeze at. But who is the fastest flock of them all? Coelhaast is, sitting at a lightning fast 130 base speed. These little guys were the hot topic back when they were first released and were a terror to face. Time has progressed and there have been a few creature changes here and there as well as new creatures in general. So, has Coelhaast stood the test of time or is as dead as the Dodos?

Let’s start unboosted. Coelhaast is best known for its speed. With 130 speed, it is tied with Phorusaura for 4th place for the fastest legendary. As for the attack, Coelhaast has a decent attack value of 1250, allowing it to dish out some good damage. Now, for the health. Coelhaast has poor hp with 3150 at base level. However, it is a flock, so unless you’re using a group attack, Coelhaast will almost always survive at least 3 attacks, if not more. Now let’s take a look at the moveset. Coelhaast lacks a rampage, which may be a problem for some, but with its high speed and absorb mechanic, it makes up for the lack of output with its survivability and synergy thanks to precise impact and run. In fact, now 3 of its 4 moves are precise with fearless alert getting a buff thanks to another flock’s mirror matchup being so painful. Remember that Coelhaast is threatened at 1 member, so if you want to save fearless alert for the rally heal, use it at 1 member. However, with many deceleration effects out there, sometimes it’s better to use it in the secured state. Precise piercing strike is a nice strike as it allows it to pressure some tanks. And for other flocks out there, it has restricted group distraction to distract those flocks and bypass their absorb ability. And with alert roost, nothing except Dracorex can kill a member on the swap guaranteed (or in the threatened state, at all). And for the resistances, like all flocks it has some rend resistance, as well at stun immunity, which is usually the best immunity in the game to possess. Finally, to go along with precise impact and run, it has pin immunity to always have the option of running away.

Boosts can always make the difference. In an unboosted environment you can be on top of the world, but then the next minute you could be under the heel of the boosted threats. So, what about Coelhaast? Today I have Cesar from Olympus Rex, who was one of the first players to bring Coelhaast into the shores.

What are Coelhaast's biggest strengths?

Cesar points out many strengths of Coelhaast (aside from the fact it is a flock). First up, unless you run Dracorex or Irritator gen 2, you cannot swap in and kill it at 1 member thanks to alert roost, which allows it to dish out big damage thanks to the critical hit increase and its impacts. And when it comes to boosting, hp is not that important being a flock, so you mostly want to invest in attack and speed. Higher damage with critical impacts is never fun for anyone. Next up, with fearless alert, Coelhaast can come in over and over again, which is something many creatures like Tenontorex simply cannot do.Finally, Coelhaast has great synergy being really the only meta legendary as of now that can run away after the first turn. This synergy with creatures like Monolorhino can cause some serious issues for your opponent.

What are some important and notable matchups of Coelhaast?

With fearless alert now gaining precision, Scorpius Rex gen 3 and Phorurex are going to have a much tougher time against Coelhaast as both of them use dodge to great effect, and with Coelhaast being a faster creature, it can also speed up past Scorpius Rex gen 3 when it swaps in most of the time. And with stun immunity, it is hard to swap in on. In fact, Cesar pointed out that the Monolorhinos that invested in less hp are usually at risk of it as well. Other creatures like Indotaurus and Grypolyth do not like Coelhaast’s resistances and cunning effects.

What are Coelhaast's biggest weaknesses (with kit and matchups)?

It’s no surprise that Skoonasaurus and Testacornibus are the 2 biggest counters to Coelhaast. They have the armor and output to easily take them down. While Skonasaurus has group moves, Testacornibus has an on escape to deter Coelhaast from swapping. Cesar brings up that you can just swap them in and take Coelhaast down.

What future do you see for Coelhaast?

Originally before this new patch, the top flock around was Argenteryx. Cesar said the Coelhaast was removed for Argenteryx as it was just more annoying to deal with when it was threatened at 2 members. However, things have changed. Cesar said it should still be pretty decent in shores. It will never be one of the big dogs with Testacornibus and Skoonasaurus running around, but it has a great role up there and can still put in some work, especially being one the best creatures that can run turn 2.

When it comes to using Coelhaast in battle, there are a few places you can use it. It can be a great lead. Test the waters and see what your opponent has and go from there. This allows you to bring it back later and get another fearless alert off. Cesar likes to use Coelhaast late game or mid game after you know what your opponent has. You also have the ability to revenge kill creatures and set up that impact and run for a potential combo with Monolorhino or Parasauthops. And no one likes to really swap out on Coelhaast with alert roost. But no matter when you use it, as long as it isn’t against something like Skoonasaurus or Testacornibus, it should do just fine.

That’s Coelhaast. It was the best legendary when it was released and still is arguably the best legendary now still (as Ankylomoloch could show it who’s boss). The scariest thing about Coelhaast is that it is just a hybrid now, and could get a monstrous superhybrid in the near future. But if you want to use up some of your Haast Eagle DNA, Coelhaast is a great creature for the arena and legendary advantage tournaments. And with the nerf to Argenteryx, Coelhaast is looking like the best flock again. Stay tuned as tomorrow will feature an epic that flocks do not like to see. Thank you for reading and happy playing.