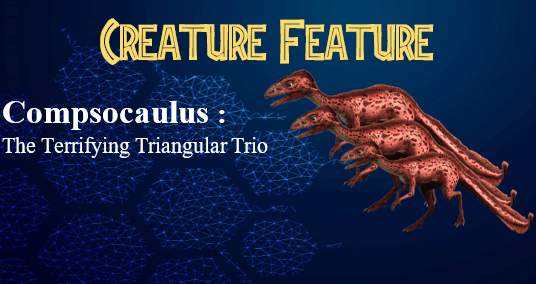 If there was one patch that can rival the meta shakeup that occurred in 2.9, it’s the introduction of flocks back in patch 2.7. Let’s just say that flocks DOMINATED the meta, and in many different metas they still do. Like in the most recent tournament, 2 very viable creatures were flocks, and the reason why Scutosaurus was so good was because of how well it could stand up to the flocks. But there was a very special flock creature as it was the first unique that wasn’t a super-hybrid. But most importantly, it was a flock. And back in the day, it DOMINATED. It was hard to take down and could work at a much lower level in the top arenas. This is of course was Compsocaulus. However, as time went on and after 2.8 and 2.9, Compsocaulus get indirectly nerfed. With Skoonasaurus’s rise to power, Testacornibus’s domination of the arena, and the bleeder comeback, Compsocaulus has taken a bit of a beating. That being said, it is still a dangerous threat and is one of the reasons why the meta today is the way it is.

So let’s first start unboosted to get a feel for it, and then go from there. Obviously, Compsocaulus is focused on damage reduction as all 4 moves and the swap-in reduce damage. But being a flock, it takes this a step further with the Absorb ability. So most of the time, no matter how hard you hit it, it will only lose one flock member. If you have 3 members with the third member at 1 hp and you hit it with a PFS boosted max attack devastation from Entelolania for example, something that should be doing 11,484 damage is now only doing 1 damage. And it’s this ability that is a big game-changer in almost any meta right now in the game. Compsognathus is a big part of the epic meta, Dodocevia is a very strong legendary, and Archaeopteryx is a big part of the rare meta. However, when it comes to HOW big of a role in the meta they are, the further up the ladder you go, the smaller and smaller the role becomes, and Compsalocaulus makes the smallest impact in its rarity in an unboosted environment. With so many good group attackers that can resist distraction,  isn’t as tanky as it used to be. And with Monolorhino and Ceramagnus being able to take out a member on the swap, that is another decent hit to it. And it also struggles with evasion, distraction, and armor. The Poukendactylus, Spinoconstrictor, and Testacornibus buffs hit it hard, and Skoonasaurus was bad news. But you may think it must kinda stink because of how much I just ripped into it. However, it’s able to overcome all this and it does a great job against everything else. And many of those creatures like Poukendactylus and Entelolania can run into major issues when it comes to specific creatures like Skoonasaurus, Scorpius rex gen 3, and swappers.

Now let’s talk the arena. Does it do better with boosts or does It just die off? Well, to help me gain better insight on this question, I asked a few people to help out. So I would like to thank the following people for helping me in this analysis.

IDGT and practicekat from Apex Predators

Just like with the Testacornibus article I did last weekend, I asked these people some questions about . They are the following:

1.       Why is Compsocaulus just good by itself (how do boosts, it's stats, abilities, and resistances make it so good)?

First up, the biggest appeal of Compsocaulus is that it’s a flock creature. That means it will be able to usually get off 4 hits as it has alert scurry in its kit to rally heal once. And it can prolong that lifespan even further with all of its distraction abilities as well as the access to rend resistance and cunning strike to remove bleed if necessary. It also has immunity to deceleration, which is great to have when your speed stat is 127, allowing you to stay ahead of the game. And, as Gizmo points out, Compsocaulus has the ability to counter many creatures, and it can do it extremely well. It destroys Grypolyth and Mortem while having a lot of fight left in it. The main reason is because it is a flock creature, and high powered hits from mortem are absorbed with ease. And not only that, but it can swap in on them for free with swap in distraction. In fact, they can do this to all sorts of creatures. However, boosts are another story as usual, and Compsocaulus actually doesn’t get too much out of boosts. Why is that? Well, it wants to be boosted in all three stats, and usually the best creatures in the arena are only focused in two stats. Take Testacornibus, who really focuses attack and hp. You can really focus on that and play to Testacornibus’s strengths with just those two stats. But with something like Compsocaulus, you have to try to balance all three, which is hard as you either focus two stats and can get rinsed if you are in a situation where that one stat is important, or you spread yourself too thin and really don’t excel from much. Compsocaulus has this issue, but despite that, it can still overcome this thanks to its flock ability. It can still compete with the big dogs while other creatures that suffer from this same issue like Magnapyritor just fail. That just goes to show how good absorb is.

When it comes to Compsocaulus’s best friends, there are few it can choose from. The most important ones are creatures like Ceramagnus, Scorpius rex gen 3, and Monolorhino who can swap in and reduce or take no damage. This is so Compsocaulus can just come in later and rally heal thanks to alert scurry. And it is also made easier for the swappers as well with swap-in distraction allowing them to possibly come in for free. And as IDGT said, it usually does a good job of putting something in swapper range. Scorpius rex gen 3 can be handy when it comes to possibly its worst matchup. And with Refrenantem coming, who knows. Maybe you’ll see a big back and forth between these two.

3.       What are the biggest flaws in its kit/stats/resistances?

Like I stated previously, it suffers from the problem that many creatures face: it needs all three stats boosted up. It wants everything and needs it, but if you do an even spread, it doesn’t excel in anything. Another flaw I find is that it lacks something its parent Compsognathus has: alert swarm. This could help tremendously with the many swappers that are found in the arena like Ceramagnus and even Monolorhino. And again, when it comes to resistances, its parent seems to get off better as the compies got full stun immunity while Compsocaulus got resistance to it, as well as lower distraction resistance and pin resistance as well. But as Allinpatrick states, this is what keeps them somewhat manageable, otherwise, they could be game-breaking if they were fully immune to all these measures, especially at the time they were released. But again, despite these flaws, they still manage to keep up.

There is one creature that really stands above the rest when it comes to Compsocaulus’s most hated matchups: Skoonasaurus. Skoonasaurus is already insane to begin with, and it really screws any flock creature. Most Skoonasaurus’s have almost maximum damage, and with the resilient counter now applying vulnerability, something Compsocaulus has no resistance to, it gets off massive damage. If you had a maximum hp Compsocaulus, a typical Skoonasaurus reduces its hp down to half of the final flock member. And if that isn’t enough, it can come in with an instant impact to deny the rally heal. Skoonasaurus was made to kill these little guys. And if Skoonasaurus was bad, with Testacornibus being another very popular pick, Compsocaulus takes yet another hit. Testacornibus just walls Compsocalulus and can do enough to easily take it down without trouble. Ceramagnus can land a lucky stun, and that’s an easy win. Ronan also brought up that Geminititan is a big enemy to Compsocaulus, thanks to its resilient strike imposing vulnerability, which gets followed up by a group rampage.

This question was asked due to the fact that we have two apexes that people do not have unlocked yet and one that people are beginning to unlock now. Apexes can change everything as most have abilities that no other creatures possess, with some having two or more. And if there is one creature that looks like it could really screw with Compsocaulus, it’s Haast Maximus, who is essentially a Poukendactylus that doesn’t let you get off so easily when you try to escape. But for now, as Practicekat put it, as long as fierce is somewhat present, it will always have a role in the meta.

While Compsocaulus would’ve been a top creature in its debut, it has taken a bit of a beating in recent times. However, out of all the people that I interviewed, not one said below top 10, with many saying it falls in at around number 7. And I can easily see why. The flock mechanic is one of the strongest mechanics ever introduced, probably only second to swap-in abilities. And when you can’t be slowed, you will almost always have a way to rally heal, you’ll stick around for some time. And with great win quality in its good matchups, there’s a reason why fierce are struggling. If I had to rank it, I would say maybe 10 at worst. It does struggle with the top Uniques, but its existence is one of the reasons why some like Testacornibus are thriving right now.

When it comes to using it in battle, you’ll want to keep it for the middle of the match to possibly take advantage of the swap-in, as well as to not run into any Testacornibus leads as well as giving your lead something to possibly bounce to if needed. Then you do some shenanigans with it and try to remove those big fierce, then maybe swap out to a Ceramagnus or Monolorhino to come in later and get that Rally Heal off and maybe a restricted group distraction as well. But this is what you want to use to get those fierce out of the way so creatures like Testacornibus can run wild and free.

So, Compsocaulus is something to definitely consider when building a team. Or, you could stock up on this unique as it could get a fusable apex, which will probably be even more insane as it’ll probably have the Absorb ability. But at the end of the day, Compsocaulus looks like it’ll always have a place keeping fierce under their tiny thumbs. And if you want to vote on what I’ll write up next week, head over to the Gamepress Discord and vote! And this is one you want to vote on as it’s a bit different than the last poll. See you next time.