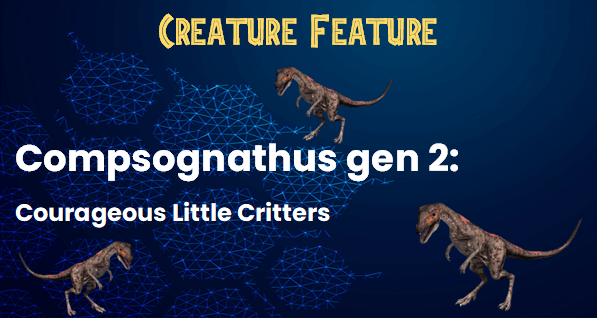 There are always some creatures from a particular rarity that are always annoying. A bit ago, the most annoying epic around was probably Argenteryx, and today it still is a nuisance. For legendaries, you have Ceolhaast or Mammotherium with them both refusing to go down with their healing abilities. Testacornibus can be a really annoying Unique. However for rares, there isn't a rare probably more annoying than Compsognathus gen 2. So while it's annoying, is Compsognathus gen 2 actually good or is it just a little pest?

Starting unboosted, Compsognathus gen 2 looks like your standard flock. It's got below 4000 hp, has less than 1300 damage, and is pretty fast with a couple good resistances. For the resistances, it has stun immunity which is always great to have. It also has pin resistance. However, 25% isn't the best, but it's still nice to have. It has distraction resistance, which is pretty good in a meta that is focusing more on cunnings these days. And, like all flocks, it has rend resistance. When it comes to the moveset, Compsognathus gen 2 has a very strong move: courageous alert. This is a priority strike with a guaranteed critical hit in every strike when secure. When threatened, courageous alert allows Compsognathus gen 2 to dodge attacks while still maintaining priority. This is a powerful tool to have because when combined with alert swarm, Compsognathus gen 2 is great at picking off injured foes. Hop and mock is a decent tool, however with a priority strike with no cooldown, it's more niche. Finally, Compsognathus gen 2 has the option to run away with impact and run, allowing for team synergy and it means Compsognathus gen 2 can come back in and rally heal thanks to alert the flock. While not as good as its gen 1 counterpart, it's still useful being able to take it from 1 to 2 members on the swap with evasion added.

Boosts can always make a big difference, and no creature is immune from this fact. It's a bit hard to find people running Compsognathus gen 2 in the arena, but my alliancemate Vazev is running it in the gyrosphere. I asked him a few questions on Compsognathus gen 2 to see if it's the right rare for you.

What is the best boost spread for Compsognathus gen 2?

Vazev says that the first thing you want to focus on is damage. With a priority attack with a critical hit on every turn it's secure, this thing can do some damage. Vazev says that you want to not bother with speed. He likes to be slower so that he can run away while still being able to trap the opponent, regardless if they reduce him to the threatened state. It also allows for a safer swap than say a faster Compsognathus. And max attack is pretty good as it's great for defending itself against swappers like Eniasuchus on the swap as usually on a max attack Dracorex will kill a member on the swap. Also with some creatures like Giraffatitan, it can usually tank a strike and not lose a member with the bulkier builds. So in the end, just focus mostly attack, and then the rest into hp.

What are the biggest strengths of Compsognathus gen 2?

Vazev says the biggest strength is its versatility. It can be a trapper with alert swarm, a tank thanks to absorb, and a runner with impact and run. It's also a swapper with alert the flock, or it can be a revenge killer. It's always got a role to fill and will almost never do nothing. Courageous alert is one of the best basic attacks in the game and with Compsognathus gen 2's stats and resistances, it's able to flow decently well. It also matches up decently well with the more fierce creatures out there like Thoradolosaur and Mortem Rex while also matching up decently with creatures like Erlikospyx, Magnapyritor, and even some Phorurex builds.

What are the biggest weaknesses of Compsognathus gen 2?

Big beefy boys mess up Compsognathus gen 2. In the arena, Vazev says that the standard flock counters absolutely rinse Compsognathus gen 2, with Skoonasaurus being able to usually 1-shot a standard build. Testacornibus as well can just eat away at their health. And they run on Testacornibus, wll then they allow it to heal up for whatever comes in next. Other creatures out there are creatures like Scorpios Rex gen 3, Diorajasaur, or Mammolania. As for tournaments, Doedicurus and Dracorex are major issues for these little guys. As long as the resilients are not present, they should do prety well. Also another big downside is the lack of pin immunity, which is something most swappers really want, especially against something like Purrolyth in rare events.

How far will Compsognathus gen 2 get you?

In a rare tournament setting, Vazev says it's a must have and for good reason. It's a top tier in skill tournaments, and boosts benefit them a lot as it allows Compsognathus gen 2 to really dish out some major damage. Unless it has some big members to help it out, Vazev says that usually at around 5500 cups it will start to really lose traction and drag your team down, but with some good teammates like Scorpios Rex gen 3, it can easily make its way into Gyrosphere and even Nublar Shores.

When it comes to using Compsognathus gen 2 in battle, Vazev like to use it as an opener or a backup opener. With alert the flock, it's not bad to lead these guys and lose some members because you can always have a chance to rally heal. But again, these guys are just so versatile that they can be used almost anywhere and will do pretty well in those roles. It's a jack-of-all-trades for usage in battle. But it's probably strongest as a lead with the impact and run as well as alert the flock.

That's Compsognathus gen 2. Overall a very solid rare thanks to its trapping abilities, priority, and bulk thanks to being a flock. It has more versatility than a large portion of creatures in the game and that's why is a popular rare to level for advantage tournaments. Thank you so much for reading and make sure you stay tuned for the next creature feature tomorrow, and make sure you dart your rares. Happy playing!