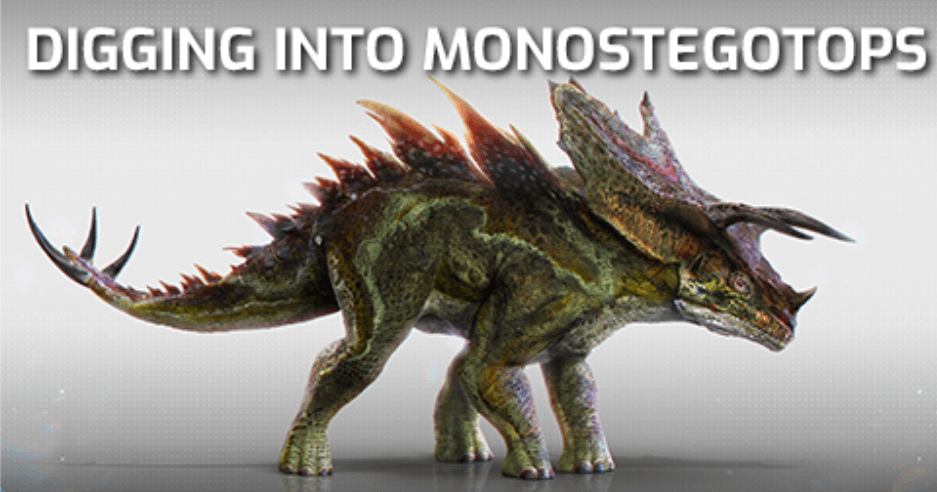 with additional input from: Jimbohi, Temerity, Hermitess, Engin_86, and Indankraptor

Ahhh, Monostegotops. A veteran legendary hybrid that has been through the rework machine time and time again. For the longest time, Monostegotops was hailed as a rock-solid, high utility bruiser tank. In 1.8, Monostegotops had reached its peak, according to many players. It even had the honor of being one of two legendary dinosaurs in Tyrant Tier on Gamepress’s tier list at one point! However, in 1.9, Monostegotops received its most drastic and controversial change yet.  Anyway, now that I’ve concluded my “Mono-logue,” let’s not get “distracted” and examine how exactly the “stunning” Monostegotops has changed.

Huge Shout out to our artist OrangeRex for this graphic! 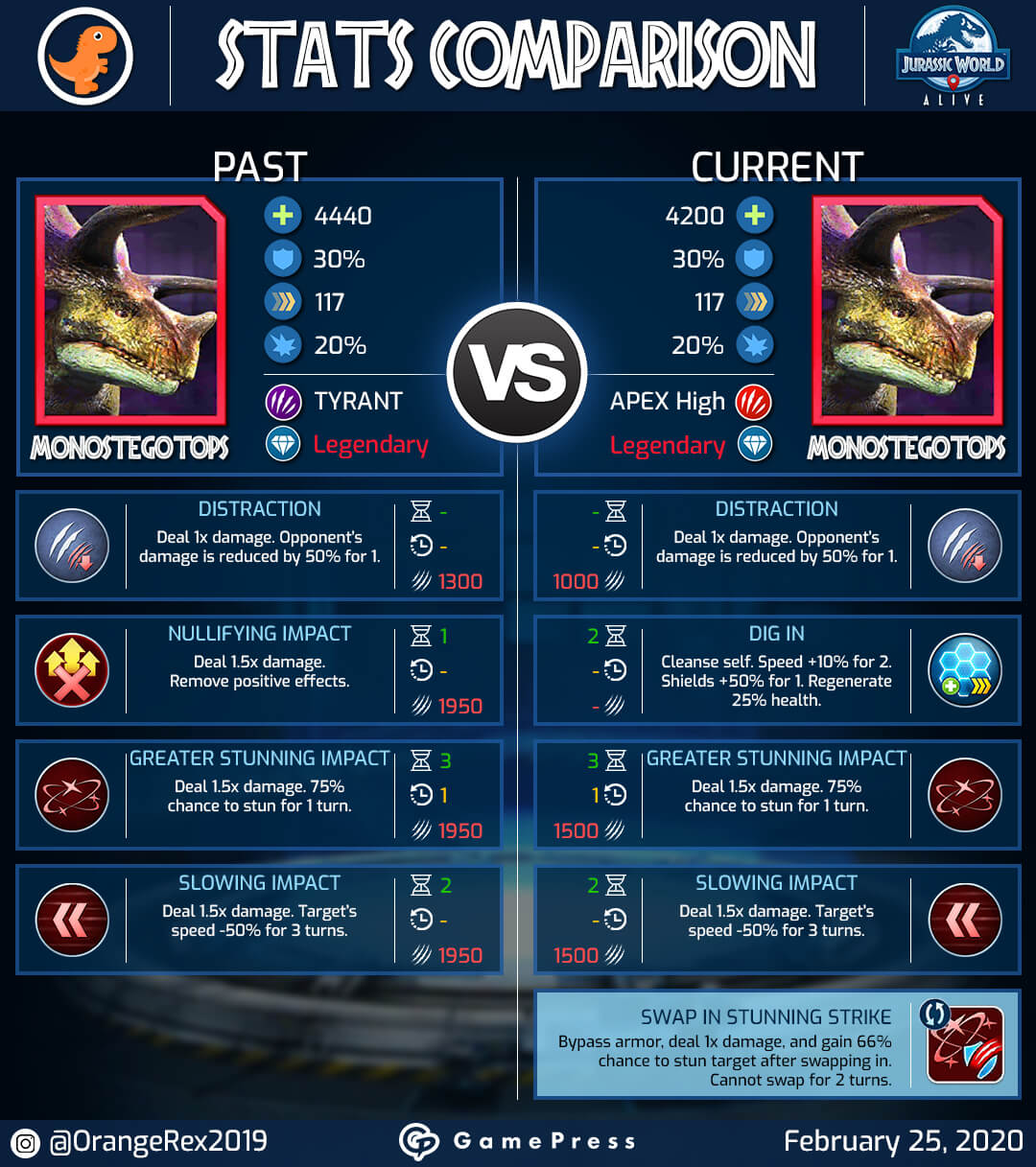 Quite the drastic shift, huh? This change was very jarring to many Monostegotops users, and once the 1.9 release notes hit, things became a bit hairy. Pitchforks were drawn and the cries of many Monostego users echoed across Discord, Reddit, and the Ludia Forum. Many mourned the extremely drastic stat nerf, and several words were used to describe this new, weird Monostego, including, but not limited to, useless, dead, destroyed, ruined, and many more. On paper, these reactions were justified. Monostego was not something that was very frequently the subject of nerf campaigns and complaints and was held in a very similar regard to an old friend. One that you’ve spent countless years and hardships with, but one that can always be counted on and appreciated. Now, suddenly, it received three very drastic nerfs, in the form of a health cut, attack reduction, and the loss of Nullifying Impact for a very strange new healing move that gave a shield and a speedup, and a weird swap in move. On paper, all hope was lost for “Old Reliable” Monostegotops.

But a lot of time has passed. Four updates have passed us by. Meta relevant dinos have come and gone. The climate has shifted. New tricks are now the rage and older ones have fallen out of favor. So, given all that, were the mournful cries justified? Is Monostego well and truly dead? In order to find out, I required some help. I sent out a call to Monostego users to assist me in sealing the matter of this dinosaur’s viablity and several responded. This is what they had to say.

Prior to 1.9, Monostego was a jack of all trades Swiss army knife bruiser. Specialized for head to head combat. It had all the nasty utility tricks to have a general winrate much higher than previous dinos, on top of rock-solid bulk and attack. It was the ultimate 1v1 dino. However, since 1.9, Monostego has done a complete 180 in terms of play-style. Now, it’s much more team-oriented. It wins far fewer 1v1 matchups, but it works far better on a team than the previous version did, especially if they complement the areas where it’s still lacking. It’s an amazing safety net dino for when you need a dino to stick around longer. Whip out your Monostego, get some damage off, and get yourself into a favorable position. Overall, there is far more nuisance to how its played, and many players like that aspect of it. Having to apply more strategy than before is vastly appealing, and generally being a very solid team-play dino with lots of synergy and conjunction potential is what keeps it on several player’s teams today. Many of those I interviewed found the current iteration of Monostego far superior to the previous version, given the shift in climate. Let’s examine that further.

Is Monostego Better or Worse Now?

Responses as to whether or not Monostego became better or worse varied drastically. Some say it adapted very well to the current meta, shedding its overreliance on utility in favor a more team-play based play-style ultimately benefited its lifespan in high tier play. Their perspective is quite understandable, as with a drastic spike in meta relevant immune dinos, and the addition of partial immunities to distraction, stun, and slow, adapting to a new role is critical, and Monostego pulled it off. On the other end of the spectrum, some players find Monostego a bit too team reliant. Said camp of players find that in order to use Monostego best, it should have good teammates that can compliment it. They miss the days when Monostego was able to hold its own in a fight, and not be very team reliant. Opinions vary heavily on this subject, as you can see.

However, as divisive as the previous point was, there is one point that both sides of the fence agreed on. Monostego could be improved upon. Input for potential Monostego improvements mostly consisted of a need for better attack multipliers. With the attack reduction, Monostego struggles to put up as much of a head to head fight as the previous version, and while it remains fairly effective, better multipliers, such as at least one rampage attack, in order to compensate for its less than stellar attack stat is something many interviewees desired. In addition, a Nullifying move seemed to be on the wishlist of many. Monostego lost Nullifying Impact for its new healing ability Dig In, and many yearn for at least some form of nullification to return. Given the high prevalence of dodging dinos in the meta, including Procerathomimus, Indoraptor GEN 1 and 2, Quetziorion, Erlidominus, and Phorusaura, this perspective is understood, and shared, by yours truly. In a meta full of immune dinos, a nullifying move would be considered more valuable than a distracting or stunning move by many.

So, given all that, is Monostego dead, useless or ruined? A resounding “no” answers that. In fact, arguments have been made for Monostego actually being superior than it used to be, and better than most people give it credit for. While Monostego still has some quirks that many want ironed out or reintroduced from its glory 1.8 tyrant tier days, Monostegotops is no doubt a force to be reckoned with, and a solid pick for any team needing some form of synergy or team support. Make sure to join our Discord to share your thoughts on Monostego!