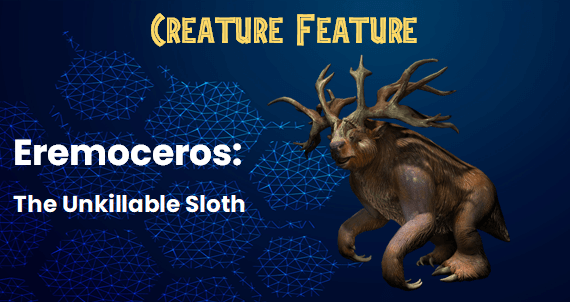 When it comes to creatures that can be a pain to kill, you usually think of the big tanks like Mammolania or Testacornibus, but sometimes there are creatures who are hard to take down with different means: stalling. And when it comes to stalling, Eremoceros is a very stally creature. With more priority moves than most creatures, it’s a sloth that tends to outspeed everything. However, does it have what it takes to keep up with the meta? 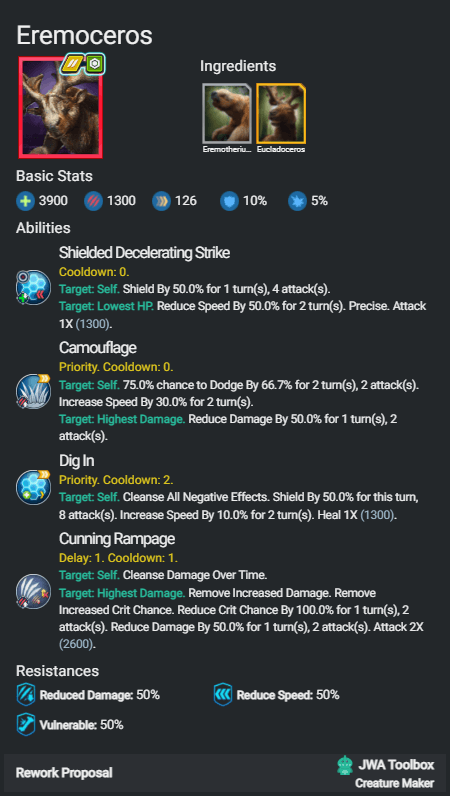 Starting unboosted, it’s easy to see that Eremoceros is a very defensive creature. With dig in and camouflage, it is able to negate a lot of damage while healing itself back up for the right moment to strike. And when it does attack, it is still pretty defensive as it has shielding decelerating strike along with cunning rampage to reduce incoming damage. In fact, it can reduce any class’s moves with its effects. Camouflage and cunning rampage reduce fierce while shielding decelerating strike reduce resilient and cunning damage. As for the stats, they are all pretty solid. 1300 attack is pretty good on a creature with dig in, and it becomes a pain to kill with its armor, 3900 hp, and all the damage reduction. And on top of that, it is also pretty defensive with its resistances. Slow resistance, when paired with shielded decelerating strike, allows Eremoceros to usually maintain priority. Also, when paired with 126 speed and camouflage, Eremoceros can usually maintain priority against creatures with slow immunity. Vulnerability resistance is also pretty defensive as resilients can’t do as much damage to it now, especially with the shields. However, it also can play offense thanks to its distraction resistance. It will struggle against shields and armor, but usually it can stall out those shields in no time.

Boosts can make or break a creature. Some become really good while others become really bad. Eremoceros is different boosted compared to itself unboosted, and today I have C123 from More Lyth More Cookies to help me out today. I asked him a few questions to see if Eremoceros is that creature you are looking for.

What is the best boost spread for Eremoceros?

Eremoceros does pretty well in a boosted environment as it really only needs attack and hp according to C123. This isn't a surprise as it has 3 moves that involve speed control, with one of them allowing it to rival creatures over 150 speed. But with higher damage, it can play a bit more offense while also playing defense with dig in healing more. And with over 6500 hp, it's going to be a pain to kill.

What are the major strengths of Eremoceros in the arena and tournaments?

While it does well against all classes, fierce are demolished about it. C123 has told me stories about the Mortem Rexes that go down while only dealing 1000 damage in total to Eremoceros. Thoradolodaur doesn't fare much better than Mortem either. Even Magnapyritor, which has ways around its effects, still loses unless it gets a bit of luck. C123 also points out that in tournaments, it is a monstrous creature to battle and can usually go toe to toe with anything in its rarity. Ankylomoloch may be able to change that as even Eremoceros can't stall out those shields, but besides that it does really well against it. I have had the misfortune of mathcing up C123's Eremoceros, and my revenge cloak on Indominus Rex did nothing to it, and that thing swept my team under the rug.

What are the biggest weaknesses of Eremoceros?

Resilients like Testacornibus, Skoonasaurus, and Mammolania are major issues for Eremoceros. It can reduce their output with its shields, but it cannot break through their armor. Another big weakness is stuns, which is something no creature wants to be weak to. This can be a problem with creatures like Megalotops and Ankylomoloch, as well as Monolorhino. The last big weakness that C123 points out is a weakness to swaps, which can mess with Eremoceros's campy playstyle. And with little armor, a stun weakness, and no rend resistance, all swappers can easily mess with it when it doesn't have a shield or evasion up.

What future do you see for Eremoceros?

C123 says Eremoceros will still be around for some time due to a few factors. For starters, it will still be a popular pick thanks to its unpredictability with camouflage. It also has a diverse range of abilities that it can use to deal with many scenarios, which can make it a powerful tool in battle. C123 said that if it had a counter, especially one that pierces armor, it would be unstoppable. But for now, it's still a creature that has to be respected and a worthy addition to any legendary team.

When it comes to using Eremoceros in battle, C123 likes to use it as a starter if he’s got nothing better to fit that role. However, C123 told me it’s actually more of a mid to late game creature if anything. It doesn’t struggle in too many scenarios outside of those that include heavy armor. But if necessary, Eremoceros is still a good opener due to the fact that it can usually dish out something to anything that comes in to start. In a legendary environment, if something like a Mammotherium comes in, it can work with it. A flock lead like Ceolhaast? It can deal with that. It doesn’t like many of the more unique meta leads like Skoonasaurus, which is probably why it’s better saved for a mid to late game in those environments, but even still, some leads like Indotaurus still do not like it. Overall, just a solid creature with a lot to offer.

That’s Eremoceros. It’s a good legendary with many tools to handle many scenarios. It really only struggles with armor, which is an issue in the absolute top tier meta, but it’s not bad at all and a good investment and has potential for a beastly hybrid. This is the last creature in the 12 Days of Creature Feature and the last Creature Feature for a bit. I thank you all for reading and I hope you have a merry Christmas and a Happy New Year!