Glyptodon: A David vs Goliath Story 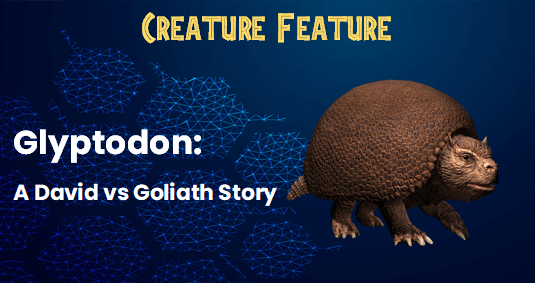 When it comes to common creatures, most of them are just plain garbage in any sort of arena. The worst creature in the game is usually considered to be Archaeotherium, and even still it has stiff competition from other commons like Iguanodon, Parasaurolophus, Stegosaurus, and Apatosaurus. Usually, this is how commons are viewed. They are low tiers that rarely see the light of day. However, there are some commons that stand out for their strength, and one of the most famous of these commons is Glyptodon. For a while it was the cunning killer, as it has a chance to kill every cunning in the game (and the only cunning with a chance to start was Utarinex). Unfortunately, flocks have smudged that title. However, Glyptodon is truly a David who can take down a few Goliaths. 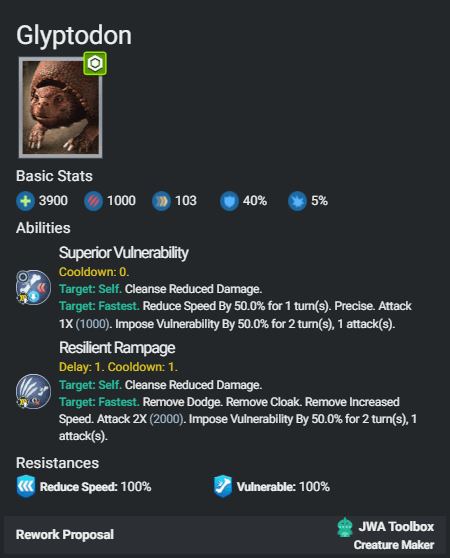 Let’s start unboosted. Glyptodon has some solid stats right off the bat. Good hp, great armor, and a standard 1000 attack stat. The speed leaves something to be desired, but it can work with it. And to top it off, it has deceleration and vulnerability immunity. So, for a common, these stats are pretty good. In fact, some commons have stats that are just straight up better than Glyptodon. Well, the reason why Glyptodon does so well is down to the moveset. Like all commons, it has 2 moves, but these moves work well with each other. Superior vulnerability is a very strong basic attack that make’s Glyptodons average damage somewhat threatening. And to add more to that, you have resilient rampage to make sure the opponent stays vulnerable. That deceleration immunity also comes in handy because Many resilients like Titanoboa cannot slow you down while you slow it down and kill it. Obviously, your typical fierce creatures like Andrewsarchus or Thoradolosaur will easily take it down, but despite that, Glyptodon goes down swinging. Acrocanthosaurus for example just survives on 800 hp, which is an easy setup for any creature.

Now boosted commons are not that common despite their rarity title, and Glyptodon is no exception. However, Mattylus from Enlightened Instinct is one of the few common experts out there, and he’s here to help you decide if Glyptodon is the creature you are looking for.

What is the best boost spread for Glyptodon?

This is a pretty easy creature to build. You go for hp and attack. Thanks to superior vulnerability, you have the ability to slow creatures down while they cannot slow you down. You shouldn’t really put any speed into it at all because even the slowest creatures around like Grypolyth will still be faster while other creatures that were once slow like Allosaurus gen 2 want to be decently fast. Mattylus and I both agreed the best set sits at around 12 hp and 18 damage to really capitalize on that vulnerability. Mattylus says that if you really want to invest in speed, do no more than 4 speed boosts. Just remember you’re sacrificing either a good chunk of bulk or output to make it slightly faster.

What are Glyptodon's biggest strengths?

Again, it’s that high armor and overall bulk combined with the vulnerability it inflicts that makes Glyptodon such a good creature to use. And superior vulnerability allows it to get the speed advantage on so many creatures. And funnily enough, Glyptodon does incredibly well in a boosted environment against all classes. In a nonhybrid environment, many of the creatures that once killed it like Albertosaurus will still take it out, but other fierce like T. Rex and Acrocanotsaurus are now taken down because they want to be faster than the competition, thus costing bulk, and allowing Glyptodon to get the kill. Even legendaries and uniques aren’t safe. Phorurex nowadays are in a speed war with each other as the faster one will kill the slower one with an instant rampage. Thus, they are investing heavily into speed and damage. That 12/18/0 Glyptodon build can easily take down a Phorurex that doesn’t invest in much hp in 2 hits. A bulkier Phorurex can survive thanks to its resistances and sidestep, but others are not as lucky. Creatures like Erlikospyx and Acrocanthops get demolished by Glyptodon. Heck, it’s not every day that you have a common that can kill 3 different apexes. But here we are because a standard Glyptodon build can easily take down Haast Maximus, Refrenantem, and Gorgotrebax.

What is Glyptodon's biggest weakness?

There are a few things Glyptodon has trouble dealing with. First up is vulnerability immunity. This is how Glyptodon is able to rack up the damage. If creatures can resist it, it struggles to really deal some big damage. Next up is high armor, which again restricts the amount of damage that Glyptodon can do. Shields are no different here. Finally, you have the fierce who are resistant to deceleration and/or vulnerability like Andrewsarchus or Marsupial Lion who can just easily take it down while denying Glyptodon a second hit. As long as you are up against another creature that doesn’t have these characteristics, Glyptodon should usually put in some work.

How far will Glyptodon get you?

While Mattylus and I both love Glyptodon, it will not get you that far. It will get you further than most commons and many rares, but the absolute upper echelon of Glyptodon is the Lockwood Library. There are some things it can do in the library, but the issue is that it is just so outclassed by all the uniques and legendaries in the library that you should just use another tank like Mammotherium, Testacornibus, or Geminititan if you really want to progress. Glyptodon could work, but there is little reason to use it.

When it comes to using Glyptodon in battle, it can fill many different roles. Mattylus likes it as a lead because usually, it wants to start with a strike to slow the opponent down and threaten a rampage with vulnerability. Getting the setup with Glypotodon isn’t necessary as it’s detrimental to lead with a rampage most of the time in a matchup (Some creatures like Coelhaast and Argenteryx are an exception). However, if the opponent throws in a cunning like Gorgotrebax, odds are Glyptodon will easily take it down. Just try to avoid those walls like Skoonasaurus or Carbonemyes, and you’ll do fine.

That’s Glyptodon. It’s not hard to see why this is easily one of the best commons in the game, if not the best. It can just brute force any cunning, as well as many fierce and resilients, into submission. It truly is a David in a meta full of Goliaths. Thank you all for reading. This is the first creature in my 12 Days of Creature Feature. Until Christmas, there will be an article featuring a creature every single day, so make sure you stay tuned for the next one coming out tomorrow.