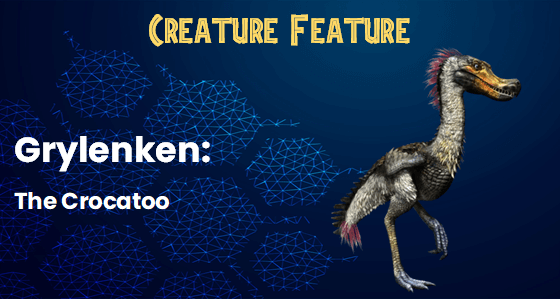 With the release of 2.11 came some interesting creature changes. Mortem’s roar got a change, Skoonasaurus was supposed to be nerfed but got buffed in many ways, Dimodactylus got some interesting buffs, and then there was one of the most interesting buffs. Grylenken was a somewhat forgotten creature due to it being overshadowed by the stronger Phorusaura, but 2.11 gave Grylenken something that now makes it a major threat. So, is the crocatoo as scary as it looks? 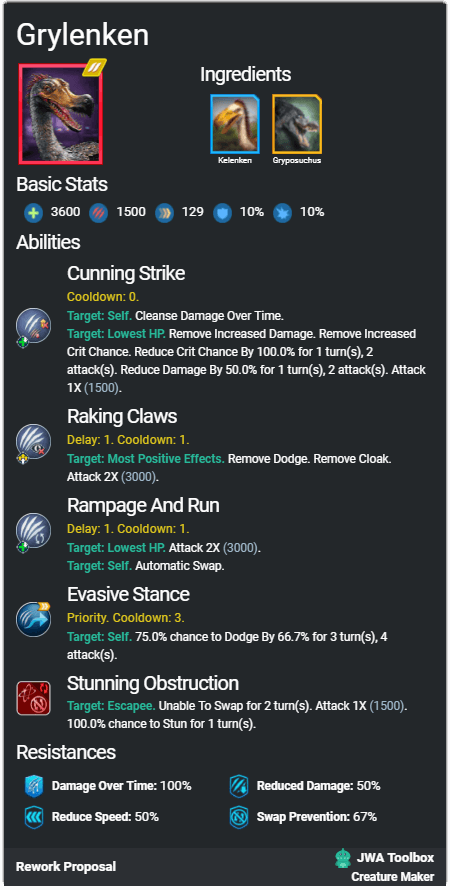 Starting unboosted, Grylenken has some pretty good stats across the board. It has decent hp for a cunning, good attack, great speed, some armor which is always nice, and a 10% critical hit chance. Its resistances are also pretty good with a full immunity to bleed as well as pin, deceleration, and distraction resistances. Onto the moveset, Grylenken has some major strengths and weaknesses. First up, evasive stance is a bit of a setback because sidestep is just a better move in general. Evasive stance is somewhat more defensive allowing Grylenken to attack in dodge. However, sidestep would allow it to stall for turn 1, which is the other big weakness. Grylenken really only has 2 good options turn 1. However, usually creatures with poor turn 1 options are vulnerable to swappers, but Ludia gifted Grylenken with possibly the third best on escape move with on escape obstruction. You pin, stun, and attack, and 1500 is no love tap either. After Grylenken gets over that turn 1 hump, then it becomes a real threat. It can do a regular rampage off the bat with raking claws, or it can rampage and run, allowing for a massive combo if Megistocurus or Woolly Rhino is behind it or it can set up another creature’s buffs on a swap like an injured Compsognathus or Scorpius Rex. And finally, with stunning obstruction, Grylenken could be used as a swapper of sorts, by predicting a swap and potentially avoiding its turn 1 problems all at the same time.

Boosts can always make the difference, and Grylenken is not immune to this. Thankfully I have Sotis from Top 500 here to help me help you make the decision on whether Grylenken is the right legendary for you.

What is Grylenken's biggest strength in its kit? How would you boost it?

Sotis’s Grylenken is very lopsided in its boost spread. Sotis actually went max speed and the rest into attack, and this is not that surprising as it has good attack, good multipliers, deceleration resistance, and stunning obstruction to deter creatures from swapping out in general. Sotis likes the deceleration resistance best as Grylenken slowed down is still sitting at 123 speed, which is faster than most creatures barring a few like Testacornibus, which doesn’t really matter to begin with. HP is not the most important thing in the world, because if something is able to take advantage of that turn 1, it will not matter how bulky you are. Besides, you want to pick off creatures anyways. You want to focus on speed and damage to play to its deceleration resistance and big output with the rampages.

What is Grylenken's strongest matchups and roles in the meta?

Sotis points out a few things in the meta that Grylenken can counteract really well. It can remove dodge, resist distraction, and is anti-swap while also helping swappers on its own team. Creatures like Scorpius Rex gen 3 and Spinoconstrictor are also not a fan of Grylenken with its bleed immunity. While Scorpius can stun it, an average Scorpius gen 3 still cannot outspeed Sotis’s Grylenken. Indotaurus is another popular creature, but with stun resistance and no distraction resistance, Indotaurus is in a rough spot. Even Phorurex can be put in between a rock and hard place with Grylenken usually outspeeding it and being able to set up evasion before it can get that rampage off. And with distraction resistance, Grylenken will hit it hard back in return. Sotis also mentions Gorgotrebax, which is shaping up to be the best apex in the meta currently to some, and Grylenken can put it down easily with those anti-evasion abilities. He also brings up a few others like Poukandactylus, Magnapyritor, and Erlidominus.

What is the biggest weakness of Grylenken?

It should come as no surprise that Grylenken struggles with armor and shields. Mammolania and especially Testacornibus with its on escape really put Grylenken down. In a legendary format, creatures like Skoonasaurus not only tank it really well, but with a decelerating counter, it can slow Grylenken for 50% its speed instead of 25% like Geminititan and Ardentismaxima. However, Grylenken can work around Skoonasaurus with evasive stance and being able to run away. Sotis also brings up the fact it has no stun resistance, which is always a problem for any creature as it’s the most important resistance/immunity in the game. Just try to avoid all tanks with Grylenken. And again, the turn 1 is always going to be a problem, which is why you cannot throw Grylenken out willy nilly.

What future do you see for Grylenken with new creatures added?

Sotis tells me the future is bright for Grylenken. Sotis brought up that in the last 2 legendary tournaments that Grylenken was very useful, and that’s without the buffs it got. And with cunnings on the rise and more bleeders being added, Grylenken looks like it’ll be a legendary you do not want to mess with.

When it comes to using it in battle, you want to use it to pick off creatures. You see something like a Megistocurus at 500 hp, throw it in and Grylenken is now a terrifying threat. If you have no other option and have to throw it in without a revenge kill, it’ll do alright if it comes into the right scenario like it going up against something like Spinoconstrictor. But really, just try to pick off creatures and it’ll work wonders. Grylenken can also be used to predict swaps, and swap in on them, thus wasting their turn by stunning them and allowing for a potential kill with a strike, thus setting it up. As long as you don’t lead with it or throw it out at a Testacornibus, Grylenken will do well.

That’s Grylenken. The buff took this legendary from a sleeper status to more of a meta threat. Not only can it take some of the top threats in the rarities above it like Spinoconstrictor and Indotaurus, but it can also take down creatures in its own rarity like Scorpius Rex and Rinchicyon with relative ease. Don’t be surprised to see it tomorrow as the tournament includes legendaries, and with the ability to work with and around some meta threats, it’s possible it’ll make a big debut. So good luck this weekend and head over to the JWA GP discord to vote on the next featured creature. Happy playing!