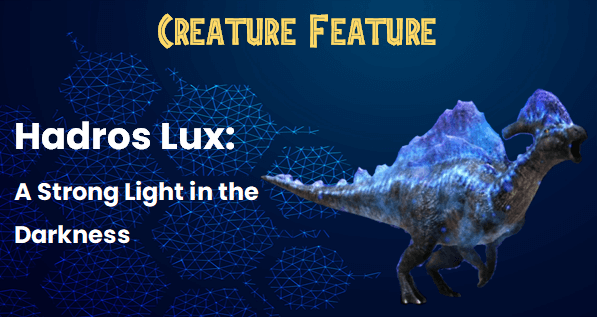 A little bit ago I did an article on Ceramagnus, who was extremely good upon release but has since declined in the meta. Another creature that was an absolute monster upon its released (and got buffed shortly after) was Hadros Lux. With high base damage, healing, and a resilient counter, it was a beast and actually had the highest turn 1 damage in JWA history. However over the years the meta has changed and Hadros has been nerfed slightly. So, is Hadros Lux able to hold up, or has it burnt out of the meta entirely? 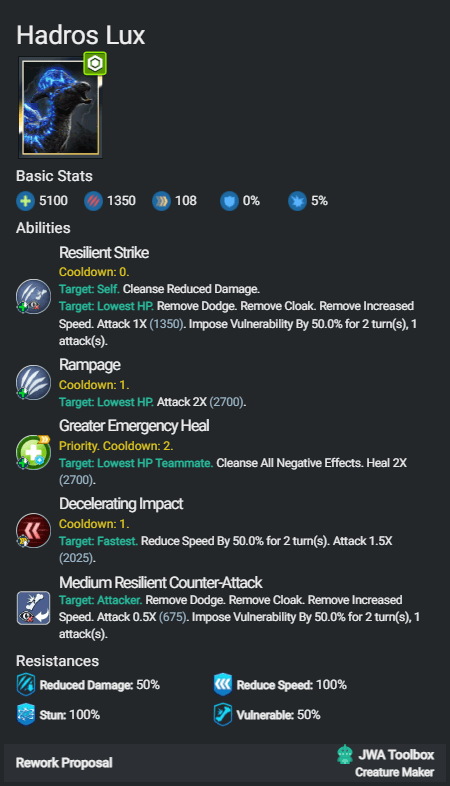 When you look at Hadros Lux unboosted, it looks pretty good, and that's because it is. However, these days, good doesn't cut it anymore. It has the moveset of something that wants to do damage, and it can do that. While it has 1350 attack now, it used to have 1500, and at the time, it had the highest turn 1 damage in game history at a maximum damage output of 5250 without critical hits. Nowadays it can still deal 4725 damage, which isn't anything to sneeze at. It also has a way to maintain priority with decelerating impact. As for evasion and distraction, it has resilient strike to help out. And when you're a bit low on hp, you can just heal up, which is good on a creature with a lot of base hp. The star of this moveset however is the medium resilient counter as this is a tool that can be used in many different scenarios.. It can allow Hadros Lux to heal and set up a swap, or it can be used to let Hadros Lux hit something really hard. The resistances are also pretty good. Stun immunity and slow immunity are always nice to have to maintain priority, but to help keep its output high, Hadros Lux has access to distraction resistance to help with all the cunnings running around nowadays. It also has vulnerability resistance to help it, and it's never a bad thing to keep under your belt. All these abilities allow it to destroy most foes without heavy armor. Creatures like Erlikospyx, Thoradolosaur, and Ceramagnus all go down in 2 hits with its speed control and big damage. It will struggle with your big tanks like Skoonasaurus or Testacornibus as well as some other creatures like Geminititan, but it will never let them get off too easily.

Boosting can make a creature monstrous or horrendous and Hadros Lux is not immune to this fact. Thankfully I have SpiderfromMars and rjrait from Reddit2 and Reddit to help me out today. I asked them a few questions to see if Hadros Lux is the creature you're looking for.

Hadros Lux has a pretty simplistic boost spread like many other resilients: attack and hp. Both rjrait and SpiderfromMars said that a 12/17/1 boost is probably the best for Hadros Lux. That high damage with the counter allows it to hit hard and regenerate a lot of hp when it heals up. The speed boost is just there for mirrors or the Skoonasaurus matchup and isn't super important, but a nice thing to throw on there. But with a creature that wants to get hit and then hit hard in return, you want hp and attack.

What are the biggest strengths of Hadros Lux?

Both said the counter is one of the biggest features of Hadros Lux. This is what allows it to just hit as hard as any creature can. There are also some other things like good stats and stun immunity, but the counter is its defining feature. Almost any unarmored opponent is either dead, going to die next turn, or in swap range after the first turn. There's not much else to say on it.

What are the biggest weaknesses of Hadros Lux?

Hadros Lux does have a few weaknesses. One of the biggest is the vulnerability to pin effects. This really hurts it when it comes up against something like Phorurex or Grypolyth. While it may be good for swappers, it also can struggle with swappers like Phorurex and Parasauthops. SpiderfromMars also said the loss of resilient rampage was a big blow to it, especially with Phorurex running around everywhere. Finally, rjrait is not a fan of the bulk and says that it just cannot compete as well as the bulkier creatures out there like Skoonasaurus and Testacornibus.

What future do you see for Hadros Lux?

Both do not see the best future for Hadros Lux, but do say that it'll remain somewhat relevant with its unique kit and niche. Rjrait says that in order to be really viable, it would need something new like 20% armor. SpiderfromMars is looking to replace Hadros Lux right now, and like Ceramagnus, many other players want to as well but cannot at the moment due to Ludia not having a shuffle or reset.It's not going away anytime soon, but it just isn't that impressive anymore.

Both SpiderfromMars and rjrait use it as an opener to help punch some sort of hole through the opponent. This is easily done with that resilient counter and rampage to deal massive damage to any sort of lead. And some common leads like Spinoconstrictor and Indotaurus can easily fall to Hadros Lux, allowing your team to gain momentum. Both also said that its bane is a lead Skoonasaurus, which can easily wall it while dishing out massive damage in return. And unless you have something like Scorpios Rex gen 3 in the back (and even still...), something is probably going down to Skoonasaurus, and it's not a bad idea to let Hadros Lux be that victim.

That's Hadros Lux. This king of the old 2.0 meta has really had it rough over the last few patches with creatures like Phorurex and Skoonasauus absolutely ruining its day, and Arctovasilas is not going to make things any better. It's not a bad creature by any means, but this light has really dimmed in comparison to the meta around it. I thank you all for reading and make sure you tune in tomorrow for the next creature feature. Make sure you dart your bears and rares. Happy playing!