Hydra Boa: You’re lucky if you survive this encounter 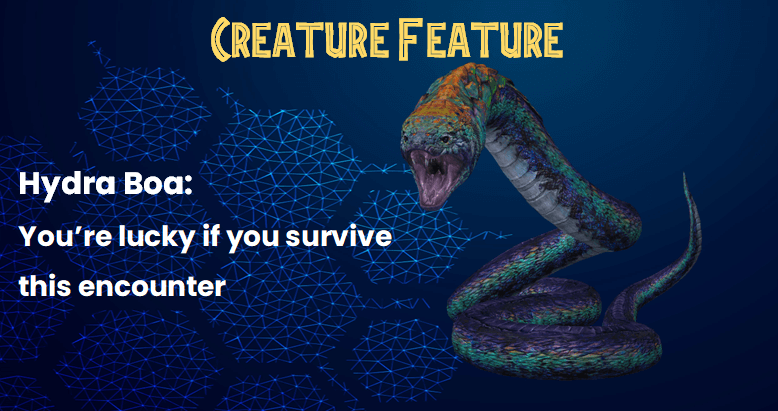 For the longest time, many thought there wouldn’t be any other apexes after Hydra Boa. However, new fusable and raid apexes have come into the frame and the newest patch rolled around just recently. Mortem Rex, Hydra Boa, Haast Maximus, and Refrenantem were apexes who all got good buffs, however the Mortem Rex and Refrenantem buffs along with Imperatosuchus overshadowed the other 2 apexes. While Haast Maximus’s buff isn’t that stellar, Hydra Boa is a different story. Has Hydra Boa snuck through the cracks and gotten lucky this patch, or will it be driven out of the top of the meta?

Let’s start off with the base stats and kit. Hydra Boa has a kit that is entirely unique to it minus precise impact. It’s stats are also not really comparable to any creature in the game either. However, when combined, these attributes make a creature that you don’t want to run into. First up is the strike. Unlike nullifying strike, this move has priority, which has its pros and cons, but it really helps out with revenge killing those faster speedsters while denying them their priority moves designed to take a hit like sidestep. Precise impact is its staple turn 1 burst option because it’s really the only turn 1 burst option it has available to it. However, if Hydra Boa wants to play defensively turn 1, it can use slippery alert along with that 15% armor to soak up hits while buffing its own critical hit chance, which is already decently high to begin with at 30%. But the last 3 moves are what make Hydra Boa so deadly. First up is the counter. Every time you touch it, Hydra Boa will increase its damage by 15% when at max hp ir 20% when less than half. This counter plays a big part with its other 2 big moves. On escape constricting rampage allows it to not only hit the opponent with a rampage when they leave, but also heal up x1 attack. And with that counter, you can heal up to an extra 40% of your attack. This is even deadlier when paired with the offensive pressure caused by its final move: fabled fangs. Fabled fangs is a priority impact with precision. But on top of that, it inflicts damage over time equal to 40% of the opponent’s max hp. This severe offensive pressure is what makes Hydra Boa so threatening. And on top of all this, it has some really good resistances as well. First up is a distraction immunity. Now there is no move in the game that can fully block an attack from Hydra Boa. Stun, bleed, rend, and pin resistances are all very useful in a meta where creatures like Refrenantem, Andrewtops, and Albertospinos all received major buffs. The deceleration immunity doesn’t matter much, but can be useful from time to time.

Boosts change the name of the game and are one of the most important aspects of the game since their release. Some creatures get better while others get worse. Now does Hydra Boa luck out and get better with boosts? I have IDGT here to help answer that question. He’s done a few videos with Hydra Boa since the patch and they are all really interesting and you should 100% check those out if you haven’t as sometimes a visual is important to go along with what I’m about to write.

Hydra Boa is very good at putting pressure on the opponent with its on escape rampage, counter, and priority attacks. It also can play a bit defensively with slippery alert and has really good revenge killing ability thanks to its priority strike and decent damage output. Seeing as it has so much priority, speed isn’t an issue as much, but you really want to invest in attack to make sure that it can better revenge kill, put even more pressure on, and have that counter become even deadlier. So mostly focus on attack, trying to reach something like 2100 damage to get the most out of that pressure. You also want a decent amount of hp to help survive all these big hits, especially with creatures like Mortem Rex and Andrewtops getting big buffs. Finally, those resistances all come in to play heavily, especially the distraction immunity and bleed resistance.

Hydra Boa has many strengths, but also runs into some issues. First up is armor. Thankfully it can use bleed to help work around that, but if the opponent is an Entelolania for example who can just cleanse the bleed, Hydra Boa isn’t going to do much. And it’s especially not going to stick around for 3 turns waiting for fabled fangs to return. So if the opponent is able to put up defenses and resist and/or remove the bleed, Hydra Boa is in a spot of trouble. Also, when it comes to big walls like Skoonasaurus, Hydra Boa may be able to take them down, but it will also go down with the ship. However, Hydra Boa has friends in high places.

Hydra Boa has some friends that help it out when it’s in a tight spot. First up is against Skoonasaurus. Skoonasaurus can take Hydra Boa down with it, but Hydra Boa can swap to other creatures. Albertospinos and Scorpios Rex gen 3 can come in and take it down with them instead. Mortem Rex can also pose an issue if it outspeeds Hydra Boa before it can use slippery alert. However, Refrenantem can swap in and easily and take it down. If there is a bad matchup, Hydra Boa has something that can swap in and kill it.

With great allies, come great enemies. Thankfully, Hydra Boa has very few enemies. But those enemies are quite powerful. One of the biggest threats is Ankylos Lux. With Hydra Boa having no vulnerability resistance, it is really susceptible to taking a lot of damage from its hostile glow and shields. And by the time Hydra can use fabled fangs, Ankylos Lux is able to run away and take it down them. Troodaboa and Andrewtops also pose problems. Andrewtops uses vulnerability and cleansing abilities to take Hydra Boa down while Troodaboa uses its immunities and precision abilities as well as on escape to put Hydra Boa in a bad spot.

Who fears Hydra Boa most:

IDGT says that there are many creatures that fear Hydra Boa. It loves to face up against Scorpios Rex, Arctovasilis (without a setup), Spinoconstrictor, and even the newly buffed Refrenantem. And everything slower than it in an impact range or anything faster within a strike range because they WILL die. Indotaurus now also struggles a lot with the rend resistance being added into its kit. And when Hydra Boa has a setup, nothing is really safe.

When it comes to playing with Hydra Boa, the common conception is to use it as a closer to finish out a game and put you in a rough patch. It also has all these phenomenal revenge killing abilities with its priority attacks while deterring swappers. However, IDGT said it’s best as a lead, and when you look closely, you can see why. Troodaboa, Andrewtops, Parasauthops, and Ankylos Lux are never starters. Andrewtops is usually saved for its revenge abilities, Troodaboa wants to set up ferocity, and Parasauthops and Ankylos Lux are used as swappers. All of its best matchups are usually leads. Spinoconstrictor and Indotaurus for example hate to run into this thing. And in fact, many times it can usually kill the lead without using fabled fangs. This allows it to almost always get to use them on the poor creature that comes in next. And even if the opposing creature can cleanse the bleed, they will still take a ferocity-boosted impact. It can be brought in later and then use those revenge killing abilities to set up ANOTHER fabled fangs. The only way to avoid this is to outspeed it, have an on escape, and priority damage, and that leaves one creature really: Phorurex. And hey, guess who just got nerfed this patch? Phorurex did. The lead is the most important matchup of a battle. You get a bad lead, you’re in such a bad position for the rest of the match. Luckily you can always swap to something else like how Hydra can swap to Albert against Skoonasaurus. But against Hydra Boa, you don’t want to swap as you’re going to eat a rampage and then Hydra Boa is going to attack. With its priority moves and severe pressure, Hydra Boa is a powerful lead that shouldn’t be taken lightly.

That’s Hydra Boa. This is a powerful apex that some like IDGT are saying has potential to be the best in the game due to the pressure it exerts on your opponent. It has good stats, a good kit, and a good role in the meta. Hydra Boa also got lucky this patch as one of its best counetrs in Phorurex got a nerf and is declining in the meta while gaining a buff itself. And with many creatures that it kills like Refrenantem becoming stronger, Hydra Boa is poised to shake up and potentially rule the meta right now. Thank you all for reading and have a happy St. Patrick’s Day!!