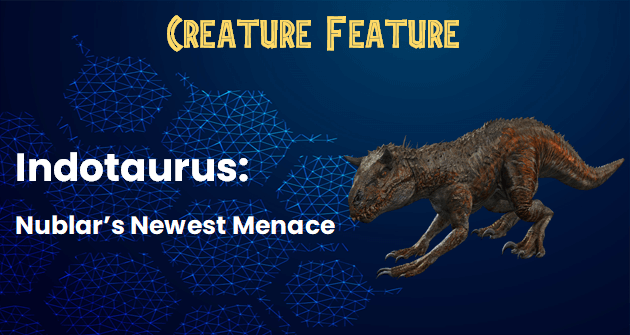 Ludia a while ago released a survey and asked us what features and creatures we would like in the game. The feature that won the poll was the creature marker, and the creature that won was the Indotaurus, which was really only rivaled in popularity by the Alankylosaurus hybrid from what I could tell. However, when it was released, many were disappointed. While the face is quite possibly one of the best faces of any creature (at least in my opinion), many players felt ripped off when they realized that it was essentially a reskinned Purutaurus and not bipedal as the concept art showed in the initial survey. Despite the disappointment, Indotaurus made up for it with its very unique moveset. So, is it the new apex predator Ludia hyped it up to be?

Starting unboosted, Indotaurus is a very strong creature. First up, you have greater rending counter combined with cloak. That is the main thing that sets Indotaurus apart from the rest. And with revenge taunting cloak increasing the output by 25% on revenge, Indotaurus is dealing a lot of output with just one counter. In fact, with that 20% critical hit chance, Indotaurus can kill any creature (without distraction or rend resistance involved) with just one counter on revenge. And when this happens, cloak is still active for that next big hit on the poor creature who now has to come in. Unlike Indominus Rex, it lacks a distraction resistance, but it makes up for that with cleansing rampage, allowing it to hit cunnings for as hard as it can while also cleansing other nasty effects like bleed and vulnerability. Speaking of vulnerability, what is better than defense shattering impact? A shattering impact that can inflict vulnerability is better. Intimidating impact can not only deal a bunch of damage along with that counter, but it can also set up for a swapper with that vulnerability on top of it. With 1600 attack and the counter, as the one and only Phil Swift once said, "that’s a lot of damage." So Indotaurus has a cloaking move with a counter, a way to bypass shields, and cleansing rampage, so how is it not broken in skill tournaments? Well, there are 2 big setbacks. First up, while it has good damage as well as pretty good hp, it has very poor speed. This allows it to be outsped by almost every unique with the exception of Thoradolosaur and Grypolyth being tied with Grypolyth for bottom 40 speed in the game, which is pretty bad. The other big setback is the resistances. Indotaurus has decent resistances, but lacks a full immunity to anything. Thankfully it has stun resistance, but 50% is quite low and can be dangerous when faced with a top threat like Scorpius Rex gen 3. However, Scorpius cannot just swap in willy-nilly as Indotaurus has one more trick up its sleeve: pesky alert. If you swap out on Indotaurus, you give it a cloak. Unfortunately the cloaks do not stack, but that’s a good trade for a clever prediction. In the past unique tournament Indotaurus was almost a must-have due to its ability to shut down creatures like Parasauthops with its multiple tools. And while creatures like Quetzorion win in a raw 1v1, the vulnerability included with the impact allows it to swap out for successful kills. And for those who predict enemy swaps, swap in Indotaurus to activate pesky alert, which can completely throw off your enemy’s game plan.

Boosts can make a big difference, and Indotaurus is not immune to this fact of the game. To help me this time, I got a few people. I would like to thank Thomasinho from Top500, Ronan and Allinpatrick from Twreckz, Cwheels from Kelliance, IDGT and Teawrecks from Apex Predators, and Cesar from OlympusRex. I asked them a few questions that they helped me with, and this is what they come back with.

What is the best boost spread for Indotaurus and why?

With a creature with a rending counter, hp is really important, and Indotaurus has a lot of it. Amongst all the people I asked, the answer was pretty consistent: dump pretty much everything into hp. Speed was valued second as Indotaurus can be a pretty good revenge killer with that attack. Allinpatrick says a bit of attack is good to help revenge kill the sauropods and other slower creatures like Tenontorex and Antarctovenator. Thomasinho said he likes to hold off on fully boosting creatures, but yet Indotaurus can still work just fine without being fully boosted in higher levels. Teawrecks says that speed is somewhat of a double-edged sword. Mirror matchups against slower Indotaurus are detrimental to the faster Indotaurus, however with its deceleration resistance, it can outspeed most Skoonasaurus after a deceleration. But again, shoot for over 7500 hp, with many Indotaurus reaching 8000 to better get off those terrifying counters and cloaks.

What is Indotaurus's biggest strength in its kit and in the meta?

With the proper boost spread, Indotaurus gains 50% more hp, which as Teawrecks states, allows it to get 2 cloaks off most of the time or to just brawl it out. Allinpatrick brings up the revenge as[ect of the cloak, giving it the potential to one-shot many opposing creatures like Testacornibus, which not many creatures except for maybe a set-up Mortem Rex can only dream of. Both IDGT and Ronan agree that the counter is its biggest strength with IDGT also saying that while they may not be impressive, the resistances are still really good for it. Cesar said pesky alert is the biggest strength of Indotaurus because in a meta where swapping is a vital necessity, a cloak on escape can really deter many players from swapping, potentially ruining an enemy strategy. Thomasinho brings up the usefulness of cleansing rampage, which can easily put many creatures like Erlikospyx and Scorpius Rex gen 3 in their place.

What is Indotaurus's biggest weakness? Both in kit and the meta?

When it comes to Indotaurus, there are many creatures that fear it. Creatures like Grypolyth absolutely cower in fear of this beast. But, there are creatures that are able to handle it quite well. Allinpatrick says Phorurex is the worst creature for it to face however Indotaurus can play around it by using cloak and using Phorurex's on escape against it. However phorurex can easily pick off an Indotaurus with its instant rampage, so while it can win,  Indotaurus doesn't like that bird.  Teawrecks says most flocks are its bane, which is not surprising with their absorb abilities and rend resistance. Argenteryx and Compsocaulus can take it down with ease, and even swap into it with their swap in distraction reducing its damage to 0. It's best to swap turn 1 because Indotaurus can cleanse turn 2. Cesar brings up the fact that while Indotaurus can take Scorpius Rex gen 3, if the stun lands, it's done for.  This weakness to stuns is a major flaw, and creatures like Monolorhino and even Ceramagnus (if built faster) can take advantage of that weakness. IDGT brings up a threat that's surging in popularity as more people get it at higher levels: Gorgotrebax. With its precise cautious impact, many distraction effects, nullification abilities, high damage, and 75% rend resistance, Gorgotrebax was made to counter Indotaurus. While most players have a positive reception of Indotaurus, not all players feel that way. Cwheels and I were discussing Indotaurus and while I was writing this,  Cwheels came back telling me Indotaurus was booted off the team.  He stated that there was too much RNG revolving around Indotaurus, which is a very valid point to not use it. It can easily take down opposing creatures, but if they bypass evasion or if they get a critical hit, Indotaurus is in trouble. Teawrecks also brings up a similar point about the amount of RNG this creature needs to stay on top. A few bad things and Indotaurus comes crashing down.

What future do you see for Indotaurus?

When it comes to the future of Indotaurus, as long as it avoids the nerf hammer, the future is looking pretty bright. There are a few things here and there. Again, as IDGT said, Gorgotrebax is what he feels is the bane of Indotaurus, and with more people getting it to level 30, Indotaurus can be knocked down a peg or two. Other apexes like Haast Maximus can be troublesome for Indotaurus, but both it and Refrenantem have other issues in the meta that hold them back from being top threats. Cesar said its probably the best fierce option around, and it will stick around for a while, although he feels Parasauthops could be an irritation for it once its rampage is fixed. Allinpatrick, Thomasinho, Ronan, and Teawrecks all think that unless a power creep or ban hammer occurs, Indotaurus will have a long life in the meta. Teawrecks is fearful of a flock more powerful than any flock we have now could come in and ruin Indotaurus, and with Compsocaulus only being a hybrid, it is possible an apex flock is on the way. But for now, the future of Indotaurus looks very bright.

Just like its kit, Indotaurus is very versatile in battle, and it can be used as almost anything. It can be a starter, revenge killer, a closer, or even a swapper. With Testacornibus being an ever-present threat, many people run many fierce creatures, and Ronan, Cesar, Thomasinho, and Teawrecks all said that if they had another fierce, they normally threw it out first with IDGT saying that he just throws it out first in general. Everyone here all said that you lead it, and then save it for later, with revenge being preferable. Allinpatrick likes to save it to revenge kill sauropods or to just use the revenge on cloak to potentially 1-shot anything that is unlucky to be on the receiving end of that 20% critical hit chance. He also stated that he loves saving this guy to make short work of an enemy Testacornibus or Grypolyth. As for a swapper, Indotaurus can be used to get a final hit off with that counter, and if the enemy swaps when you swapped in Indotaurus first, you just got yourself a free cloak. And as a closer, you can really punish your opponent with pesky alert. No matter where you use it, as long as it isn’t in a matchup that is extremely against it like Gorgotrebax, Indotaurus is going to output good results.

So that's Indotaurus. With so many players coming up with many different strengths as it's biggest strength, you can tell this thing is a great pick. However Cwheels is right. Do not expect a creature that revolves around a lot of RNG to work every single time. While it does lack some consistency, it does make up for it with it's raw power and versatility in battle. And with many creatures not being able to really shut it down, with many of the ones that can having issues of their own, Indotaurus is going to be a common face for a long time, which is good because the design team put a lot of effort into that face. Now let's hope that Indotaurus can rear up on its hind legs and look like the terror that it is. Thank you all for reading, and head down to our discord and vote for next week's featured creatures. Happy playing and good luck in the tournament tomorrow.