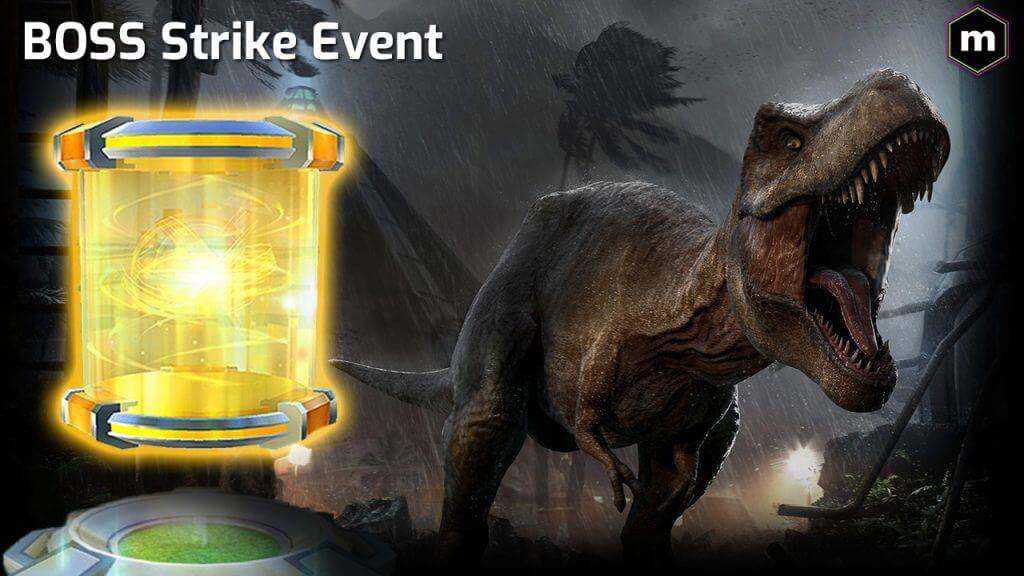 Explorers! Welcome to the first ever GamePress Strike Guide! The first time is always the hardest time, but we hope that you'll find the tips and advice we have here useful! For this Strike Guide, we have three powerful raptors facing us! Let's see how we can beat these speedy creatures! 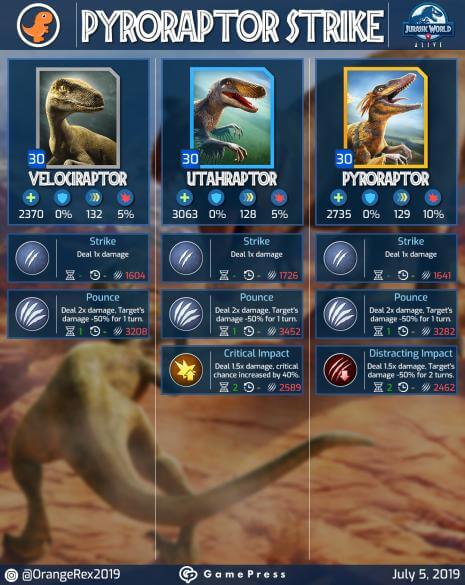 With our incredible infographic provided by our artist Orange Rex, we get a detailed look of each of these raptors. But just to be sure, I'll now be going over each of these dinosaurs individually to highlight their strengths and weaknesses.

The first dinosaur I'll cover is the Common Velociraptor. Being the fastest creature in the game with a whopping 132 Speed, this speedy dinosaur will most likely outspeed you if you haven't invested a lot in Speed Boosts! With its incredible Pounce attack it can also deal 2x damage while reducing your Attack by 50% for 1 turn!

However, that's pretty much where the good stuff ends. Being the fastest creature in the game is nice, but its Health and Attack stats are pretty mediocre at best. The low Health stat in particular will be its downfall, as it is really open to heavy hitters and slowing moves, especially Superiority Strike. And the Attack stat isn't bad, but it is quite low for a level 30 dinosaur. If you're still worried about the incoming Pounce, use Instant Distraction to soften up this hit.

Utahraptor has a lot of improvements over Velociraptor. For starters, it has the highest Attack stat of these three raptors. Secondly, it has more Health and a better moveset. Critical Impact being added give it another high damage move to use against you, and it makes it a bit more unpredictable in what move it'll use first.

However, even though it has higher Health, it still isn't very great. And with 128 Speed it's the slowest raptor in this Strike. Just like Velociraptor, Superiority Strike will be Utahraptors main weakness, due to it having the ability to Cleanse the Distraction from the Pounce and making it slower for 1 turn. Utahraptor itself is also quite weak to Distraction, with no way to remove it by itself.

Pyroraptor, the main star of the show, has a double Distracting kit. This means that if it plays correctly, it can reduce your damage to 0 the second turn! Its 129 Speed is also quite good, being able to outspeed all those non-boosted 128 dinosaurs. It also has a small increased Crit Chance, being 10%. So it has double the chance of the other Raptors to Crit you!

But, it also has some weaknesses. Just like the other raptors, Pyroraptor is extremely vulnerable to Slowing and Superiority Strike. Its low Health doesn't help it either, being in range of twoshotting by many boosted chompers and other faster creatures. Shields and Armor are also a great way to counter Pyroraptor, because none of its moves pierce Armor or shatter Shields.

In the article down below, we've linked our Guide to understanding Slowing and Stunning. Both might be helpful against these raptors, so give it a read if you want to know more!

What do I bring?

Now that we know our opponents better and know their Strengths and Weaknesses, we can strategize on what dinosaurs to bring. For starters, Superiority Strike is a must-have in this Strike. It was introduced to deal with Raptors in the first place, so it's ideal to bring here. Armor can also be useful, as well as Shields to reduce the damage. And if you've got a dinosaur with Distracting abilities, you can bring it if it can survive a hit or two. Below I'll list 8 dinosaurs that I think will be useful here. (This is with no boosts in mind. I'll go over boosted creatures later.)

Kentrosaurus and Wuerhosaurus: these two make it due to their almost perfect kit. Superiority Strike and Thagomizer allow for amazing Speed control, while they can also soften up big hits with Instant Distraction! And with their high Attack stats they also deal good damage! Kentrosaurus has a 0.5 counter to deal a bit more damage, while Wuerhosaurus has 20% Armor to reduce the damage even further. Both are awesome to bring to this Strike Event!

Parasaurolophus + Dracorex GEN 2: This is an awesome combination to use. Parasaurolophus is a very bulky creature with high Health, and its basic Attack is Superiority Strike! This give it some Speed priority to use its Impact and Run right into the Swap in Rampage Dracorex GEN 2 has! This will take out a large amount of health if not kill one of these raptors! Keep it in mind if you want to stunt a bit! Dracorex GEN 2 in particular is amazing to bring, as it can take out that last bit of health from a raptor with little effort.

Stegosaurus: The most basic raptor counter there is, Stegosaurus has Superiority Strike, Thagomizer, good Health and 20% Armor to really counter these raptors. The chance is high that you've also leveled this creature quite a lot, as it needs to be level 15 to work towards its Legendary Hybrid!

Alanqa and Arambourgiania: These two pterosaurs have the ideal ability here: Swap in Invincibility. This reduces the damage these raptors deal to 0 when these two swap in. Both pterosaurs also have access to Superiority Strike and a shielding move, Long Invincibility and Short Defense respectively. Awesome counters if you are unable to survive another hit!

Suchotator: Just like Wuerhosaurus and Kentrosaurus Suchotator has that awesome Superiority Strike and Instant Distraction in its kit. What makes it different from these two Stegosaurs though is its Bleeding move: Lethal Wound. This allows Suchotator to put a raptor on a timer for 3 turns. If you hit a raptor with Lethal Wound, the raptor will drop in a maximum of 3 turns. How cool is that?

The best part of the counters I've listed: All of them except Suchotator have Hybrids for which they need to be level 15, so they'll probably be at a decent level!

Now for the Boosts part of the counters. We can be a bit more straightforward on this one. Use Healthboosted Armored creatures, preferably with Superiority Strike. Other ways to deal with these raptors is with faster Speedboosted creatures.

If you beat this Strike Event, you'll be rewarded with a Pyroraptor Epic Incubator. In it you'll find 200 guaranteed Pyroraptor DNA and the regular Epic Incubator rewards: thousands of coins and loads of DNA. The amount of both varies on your player level.