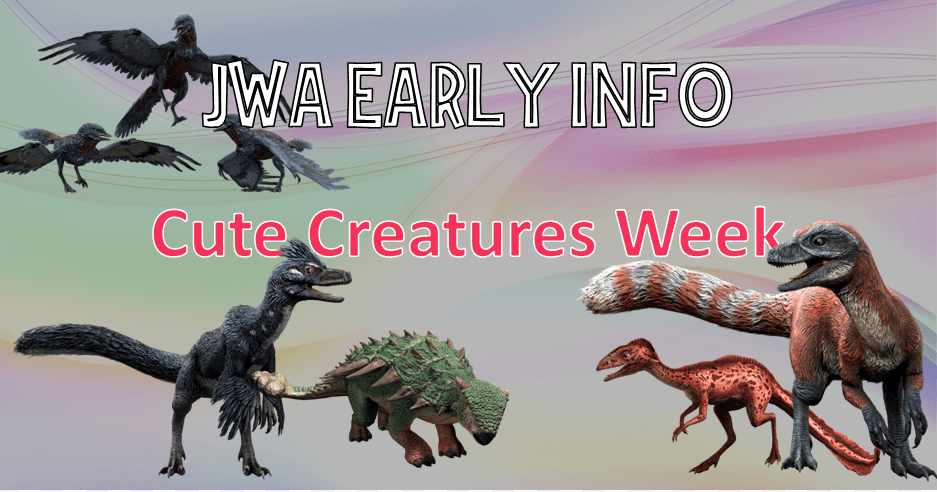 Explorers! Twitterpation is in the air, as we've received information on next week's Cute Creatures Event! Ludia has shared the following information with us, so we can share it with you. They have provided the most recent information available at this time. The information is considered not final and subject to change if necessary. Let's see what we have to look forward to!

You'll recall we did a community vote a couple weeks ago, and these were the results which will be featured under event drops from November 15th through November 21st:

We did our own poll in our Discord server, and these results are very close to what our community most voted for. Coel and Sinosaur were by far the top voted Commons, and Glyptodon had actually edged out Eremo. Archae was the top voted Rare, but Tenonto and Draco actually came in 2nd and third. Echo was selected fourth most followed by DIplo2 and then Onyx. We accidentally left Maia off our our poll, so those results are somewhat inaccurate. Bumpy and Diplod were the highest voted in our poll with Kentro followed by Blue and finally Troodon.

It's no surprise that Rinch and Sinokota were the top voted Legendaries, and Compsocaulus was also the top voted Unique. Of course our community is a small sample of the entire player base, so we don't expect what they choose to represent what will ultimately happen. Why not take this time and join us if you aren't already, and have your choices captured in our various voting polls?

This looks like a pretty exciting and s'cute event that will help us all with some great DNA! As always, we will have the weekly guide out on Monday letting people know more information and what we suggest you should go after. In the meantime, if you want to chat about it more, make sure to head over to our discord!