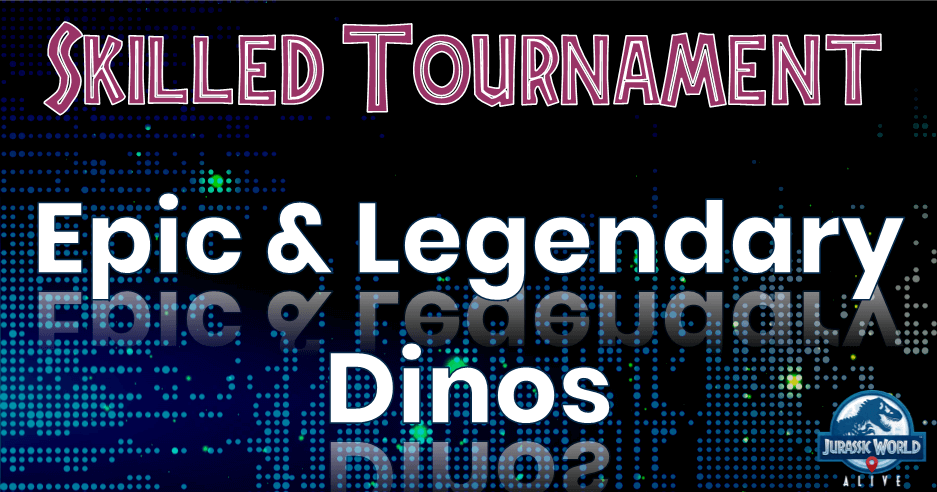 Hello again Explorers! we have yet another skills tournament this weekend and it will feature epic and legendary dinos. Here are the details on it: 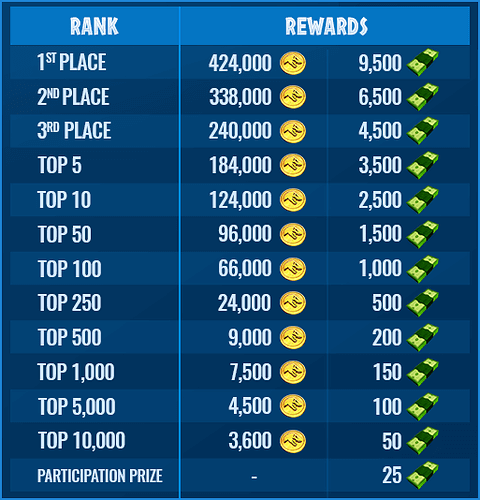 This is a pretty steep entry fee and you won't get that money back unless you place in top 5,000. That being said, this should be a really fun tournament with the chance to play with a lot of the newer creatures.

There are a lot of dinos to choose from in this tournament, so you should really run what you will have the most fun with and what suits your playstyle (you could do a completely swapping team if you wanted to). In total, there are 82 different creatures you can play with.

To answer that we went back to our Battle Simulator tool and did a simulation of all common dinos against each other.

Because we love infographics, we created one to show the top 20 epic and legendary creatures. Below each image, you will see the win (green), loss (red), and tie or timeout (blue) percentages. A tie occurs when either the match exceeds a certain maximum number of moves or (more often) when a bleed causes both dinos to be dead at the end of a match. A timeout occurs when it reaches a certain number of moves and both dinos are still alive.

So without further ado, here are the top 20 Epic and Legendary dinos ranked in order according to the simulator we ran: 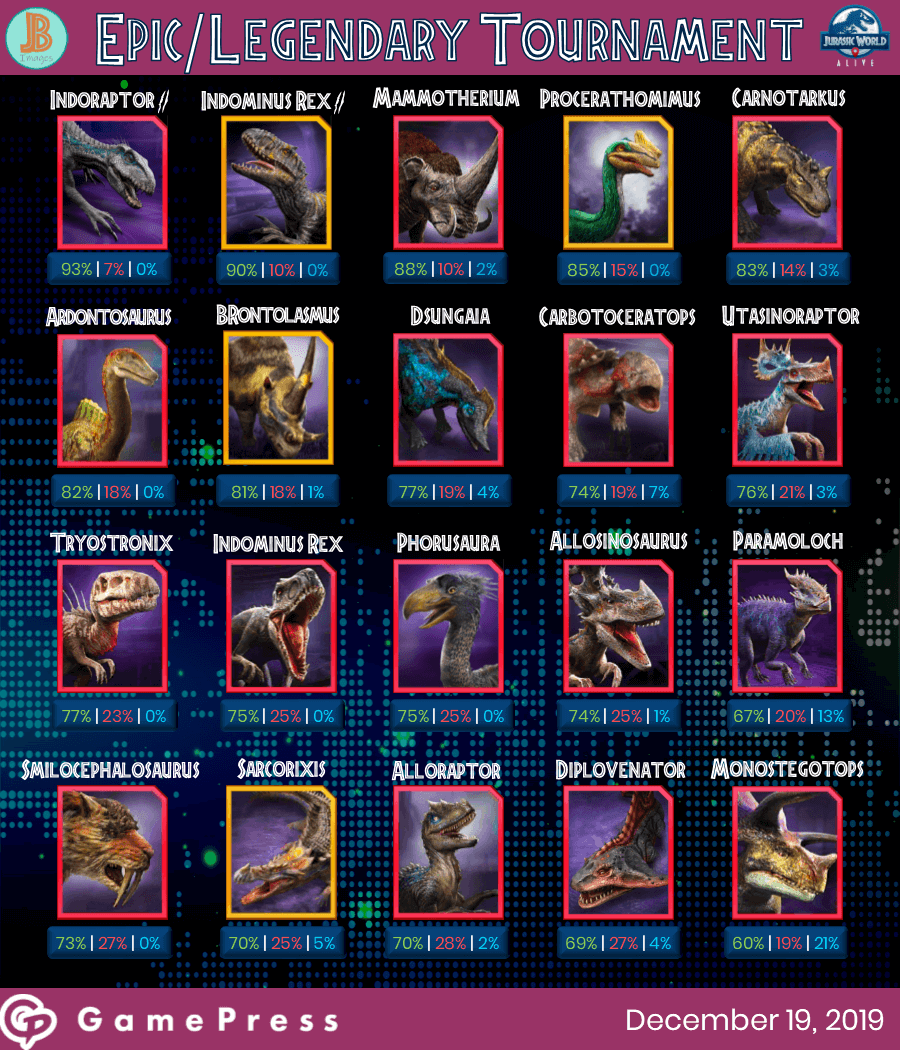 Once again, one of our favorite rats to hate, Dracoceratops, isn't listed anywhere on the top 20 results. Since this dino solely relies on its swap in damage, for the most part, it doesn't do well in the simulator results. Since the change to Swap in Savagery, this dino won't have the impact it once did and it won't be able to easily one-shot dinos. Remember that the swap in does 40% of the maximum Health of the creature it is swapping in to. And it won't go through Armor or Shields. It could still work on something like a swap heavy team, but you might not be able to regen and get out of there as easily.

First of all, don't just pick the top 8 and go with those. As we mentioned, the sim is a head to head match up visualization so there are plenty of dinos that work well on a team that may not necessarily be in the top 20. And some of them may just end up being set up fodder for the next dino. There are plenty of creatures to choose from in this tournament so experiment and see what works best for you. Ideally, you want a diverse group so you need speed, armor, tanks and probably a couple of counter attackers as well.

The top 3 dinos are def a force to be reckoned with. Indoraptor Gen 2, Indominus Rex 2, and Mammotherium are a good combination of health, speed, and power and have very few true counters. Mammotherium is the newest of the bunch and has a pretty awesome kit with the ability to buff its damage on the basic move, speed up with Dig In, Slow down with Bellow, and hit through evasive with the Definite Rampage.

Indoraptor Gen 2 only has 1 true 100% counter and that is Ardontosaurus. With access to Definite strike decelerating Impact and Defense Shattering rampage, it can remove hit through Indo2 evasive stance or cautious strike while maintaining speed control. It is also immune so it can't be bled and access to Instant Invincibility could also help it against Indom2 if you play it right.

Mammotherium has 4 creatures that are 100% counters to it: Gorgosuchus, Indominus Rex 2, Phorusaura, and Smilocephalosaurus. Gorgosuchus is a guaranteed win with the Ferocious Strike and Defense Shattering Rampage combo, but it does lend itself to be set up on after as it is left with very little health.

Phorusaura shows low on the sims but honestly deserves a mention. It has swap in stun (which doesn't always work so it's best not to rely on it) and access to 2 rampage moves with Instant Rampage and Rampage and Run. Since it is immune to swap prevention, this one is actually a good one to bring out naturally. Even if you are slower you can get an Instant Rampage off and if they swap to something that isn't a good matchup for it you can run away.

We also can't forget Procerathomimus. Not only is it one of the few counters to Indominus Rex 2, but it is also the fastest creature of the bunch and has access to completely 0 out damage with Instant Distract and Distracting Rampage. It will struggle against immune and armored dinos however so those are good to have on the team to take care of it.

There are a lot of possibilities with this tournament and just because a creature isn't on the image or isn't mentioned above doesn't mean it won't be good. There are so many other good options we can mention, we just can't go through them all. With all the creatures there are to play with, feel free to change your team to suit your needs and playstyle. There will be a lot of variance in the top teams so go with what works for you, not just what other people are using. And make sure to practice! Some of these are newer creatures with moves you might not be familiar with. Grab an alliance mate and do some friendlies so you get familiar with the team you plan to run.

For the most part, people have been pretty positive about these weekend tournaments. We are especially excited about the possibility to use some new creatures and people are already scrambling to try and unlock Mammotherium before the tournament starts. Our discord has already been buzzing about their teams and what will be the best dinos to have. While the simulator isn't the end all be all, hopefully, it helps you get an idea of what dinos might be good to use. Since this is a skills tournament, all the creature levels are set and friendly battles will be a great way to practice. Try a variety of different dinos and see what works best for you. Most importantly, have fun! Make sure to join our discord to get in on the discussion as well!