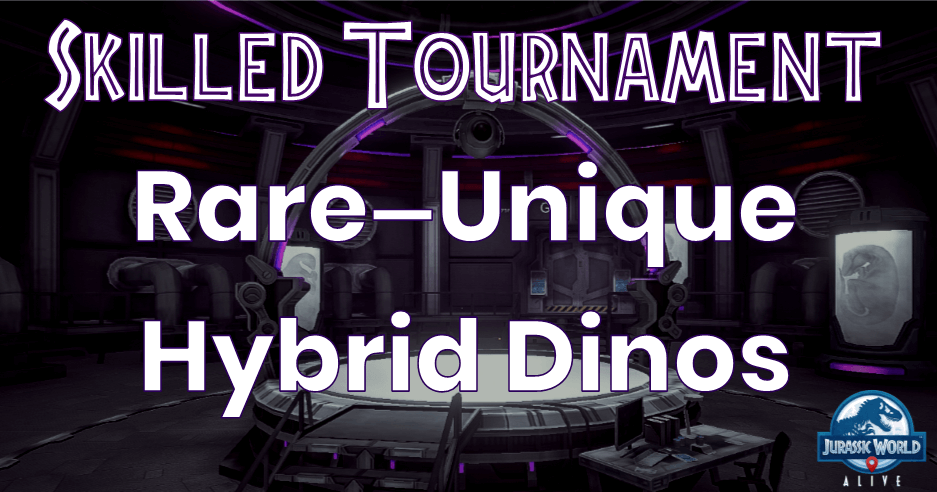 Explorers! It’s that time of the week again: The Weekend Tournament! And this time it’s a good one for everyone who has a lot of hybrids, because it’s the Greater Hybrid Skill Tournament! With ALL hybrids being allowed, including Uniques, this will be a tournament where the players further in the game can really shine. As a collector who has a lot of creatures unlocked, I am looking forward to this tournament, as it will give me the chance to use some creatures I haven’t used before! 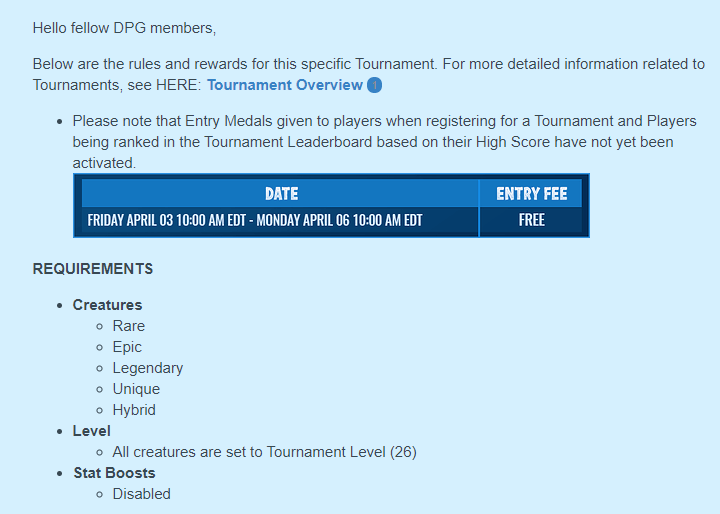 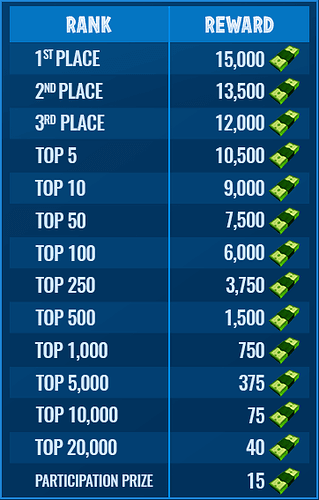 The reward for this Tournament is Hard Cash, which will be very useful! You can buy coins, incubators and boosts with them, so there is no reason to not participate in this FREE Tournament!

But now the thing you were all waiting for: Here are the Sim Results for this Tournament! We've recently updated the Battle Simulator to be even more accurate, so these are the best results yet!

Below each image, you will see the win (green), loss (red), and swap out (blue) percentages. The swap-out percentage is when either dino swaps out of the match and the battle essentially ends. 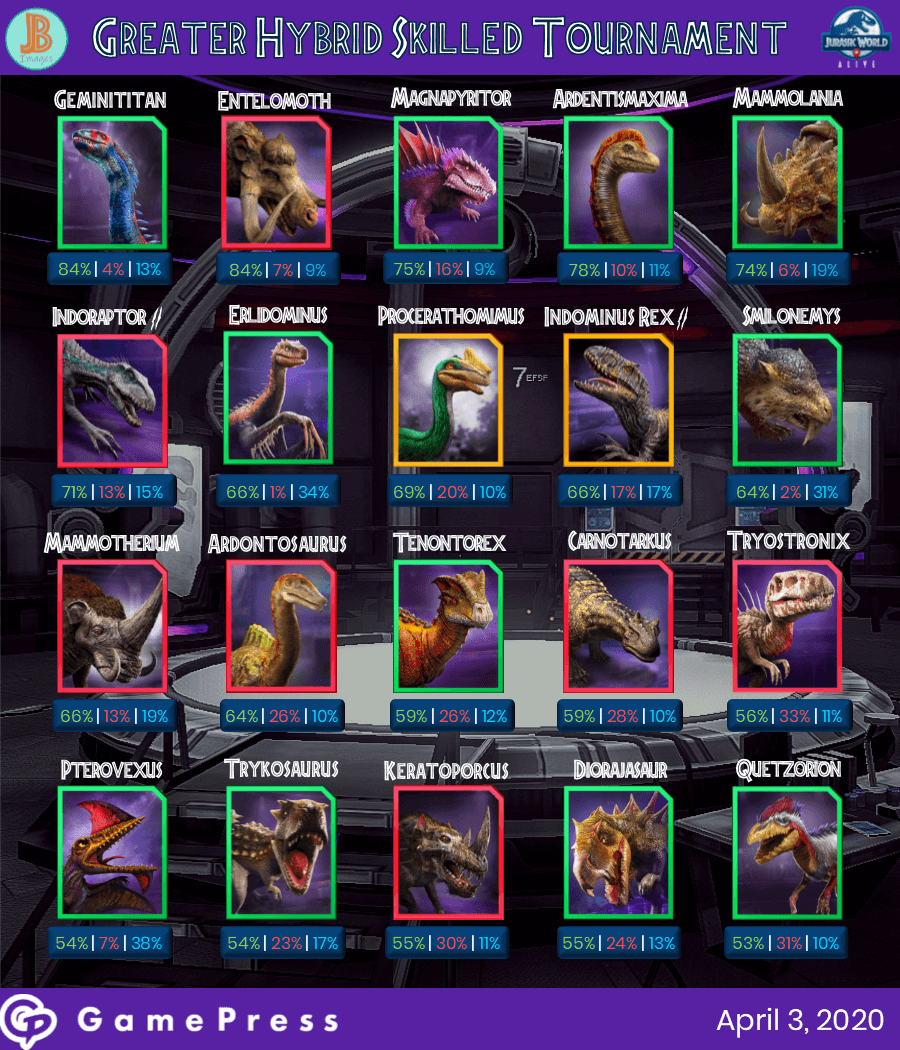 Were you surprised? I know I was. Mostly at Mammolania, I expected it to be much higher in this list. There are some creatures that always seem to be at the top, like Geminititan, Entelomoth, Magnapyritor and Ardentismaxima, while some faces were a surprise, like Pterovexus and Keratoporcus! Quetzorion rounded off the top 20 on the Results, still doing all right even with the massive nerf it received this patch. Now, I think we should go over some Team Building Tips, talking about the 5 biggest threats and how to counter them.

Biggest Threats and How to Counter Them

To start it all off, let’s talk about some big threats this Tournament. Seeing as this Tournament is allowing Uniques, the most important threat to deal with will be Geminititan. This Immune Sauropod with 6000 Health and 1400 Attack, combined with a crazy versatile moveset is a real threat that only a few creatures can challenge! Trykosaurus and Grypolyth are going to be your best bet against Gem, but they usually win with a very small health pool, leaving them in revenge kill range! Another creature that might work is Alloraptor, but this is a case of predictions! Predict wrong, and you will lose the fight against Geminititan! It’s all in predicting when Geminititan will throw out the Instant Distraction!

Next on our list we have Entelomoth. Don’t worry, this isn’t the last Mammoth hybrid you’ll see. This little bugger may have had an Attack nerf this patch, but all its counters got nerfed as well, so this creature is still on top of the game! To counter this beast, the aforementioned Geminititan will be your best bet! Other great creatures to counter it will be Indoraptor G2 and Tenontorex! Key to defeating it is to be faster than it, and try to negate the damage it can do! Be very careful of the Mutual Fury though, as it will surprise you! Entelomoth becomes the fastest creature in the game with it, only rivalled by an Indoraptor G2 that has used Mutual Fury! 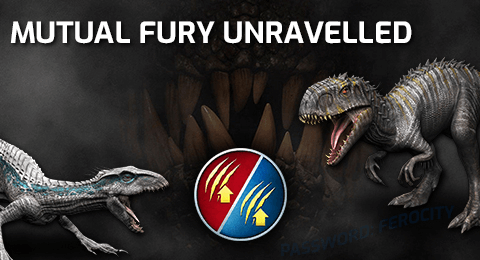 Next up is Magnapyritor, a classic creature of Jurassic World Alive! As one of the very first Uniques in the game, it’s good to see that it still does well. Magnapyritor is a very versatile creature with Nullification, Distraction, Immunity and Defense Shattering abilities, so it can handle a lot of creatures very well! To counter this creature, Erlidominus, Geminititan and Entelomoth will be your best bet. Erlidominus is faster than it and will twoshot it with Rampage and a Strike, Geminititan can survive two hits and take Magnapyritor out in two hits, and Entelomoth can use Mutual Fury to speed up and smack Magnapyritor with a Defense Shattering Rampage.

Fourth on the list is Ardentismaxima, the other Immune sauropod. While Ardentismaxima did get a Health nerf, it will still dish out lots of damage with its Decelerating and Defense Shattering attacks! Definite Strike will help with the dodgers running around. To counter Ardentismaxima, Tryostronix, Geminititan, Mammolania, Trykosaurus and Indominus Rex G2 will be your best bets. Take damage and dish it back out is the best tactic to go!

The final big threat is the newest one: Mammolania. With a big Attack stat, high Health and Armor rivalling Trykosaurus Mammolania is a very powerful threat. It will do the same things as Mammotherium, but it will hit harder. Your best ways of beating it will be Entelomoth and Gorgosuchus! Yep, that’s right: Gorgosuchus will be a very cheap counter to one of the biggest threats in this Tournament!

However, these 5 won’t be all you see. There are lots of other powerful creatures like Indoraptor G2, Mammotherium, Indominus Rex G2, Trykosaurus, Thoradolosaur and Tenontorex that you will need to keep in mind, as there is a lot of variety here! You might get surprised by some of the matchups you will get! 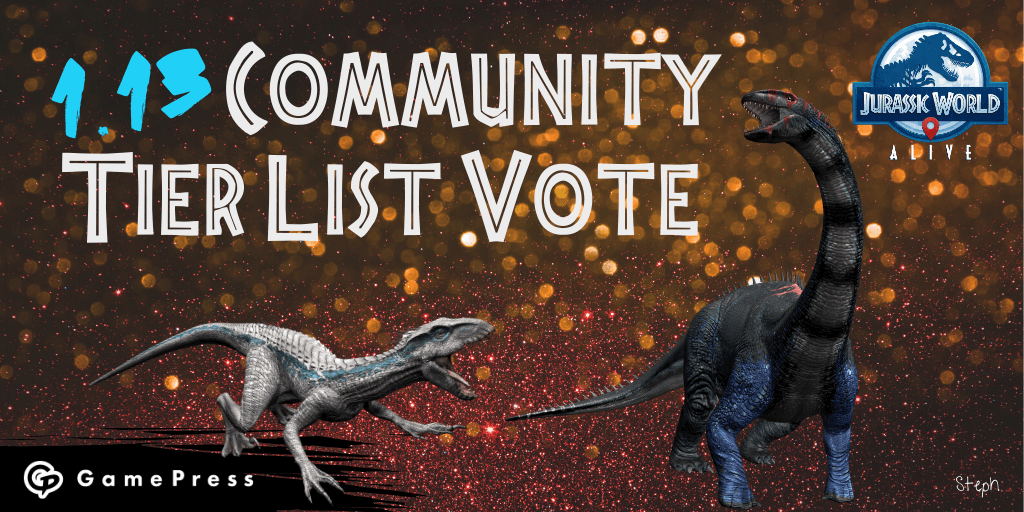 That will be it for this Tournament Guide! Being able to use Uniques this Tournament will be a lot of fun, but there are plenty of creatures of lower rarities that will be very useful! What creatures are you going to be using? Let us know in our Discord server where you can chat with us! We hope to see you on there!