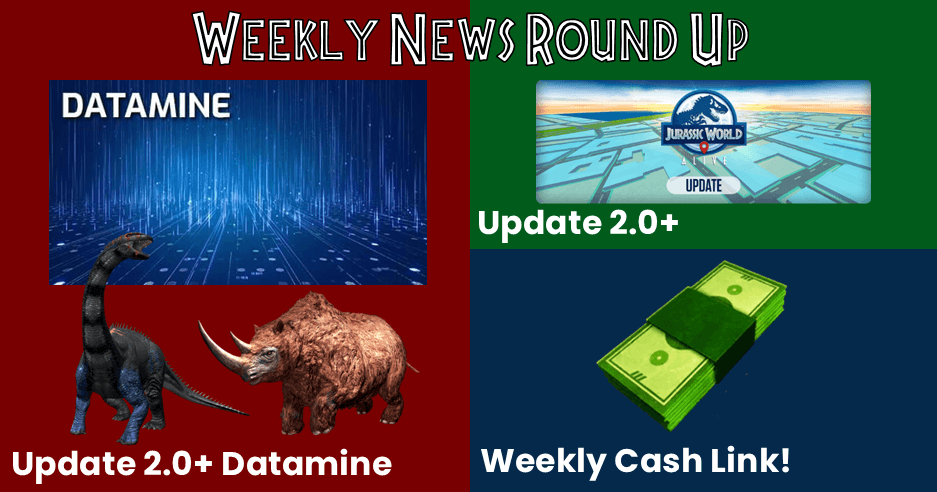 Hello Explorers! We're in the middle of the Quetzorion Championship and Haast Eagle Season and we have got some news to report on! Update 2.0+ has dropped this week and we want to cover on all that has (not) changed with it. Furthermore we have datamined the game and we have revealed some very interesting information! Let’s dive right into the news!

In order to fix some of the main problems in JWA right now, Ludia has decided to push a small update in between the major ones called Update 2.0+. In it, these are supposed to be the changes.

We can report that the Raid DNA Distribution has indeed changed. People are reporting that they are receiving 15 Mortem Rex DNA at minimum, with numbers such as 20, 25 and 30 also popping up. It seems like these are now the values of Mortem Rex DNA you can get, however we do not know the exact rates just yet. If we do figure them out we will update you with the exact numbers.

Ludia also fixed the Raid Lobby issues, so you should be having an easier time raiding with your Friends and Alliance members.

A rather unexpected change was the change to the Arena, where you will always be winning or losing 30 trophies. This makes it easier to climb the Arena, as you won’t be getting low 20 Trophy wins or drop 40 Trophies when you lose.

Finally we get to the thing Ludia did NOT change: Instant Invincibility Taunt. Well they changed it, but not in the way the community wanted it to be changed. Instant Invincibility Taunt still has the potential to block two Attacks instead of always blocking one Attack like the community wanted it to be. People always thought that this was a bug, but however the move was working just as intended, as the Shield is active for an entire turn. The frustration with this move is more based on people not knowing what exactly a ‘Turn’ is and the fact that Instant Distraction does block only one attack instead of lasting the entire ‘Turn’. We are working on an article defining the difference between Attacks and Turns so be on the lookout for that in the future!

Below is our code for this week. It will be active until Sunday, August 23rd at 12 PM EDT.

Get your Weekly Cash here!

As with every Update to the game we went datamining and found some pretty cool stuff! If you don’t want to spoil yourself, here’s the chance to turn back.

A change that needs to happen: Balancing Ardentismaxima
Next Alliance Championships

With the datamine we revealed a couple of things that might promise some good news for September! The Alliance Championship is most likely going to feature the Unique omnivorous Sauropod Geminititan! This will be a very exciting championship, as Geminititan is still among the most powerful creatures in the game and Diplodocus can be very hard to come by. Getting a championship for this creature will therefore mean that people will be getting lots of Geminititan DNA to level it up or even unlock this monstrous creature, as well as the added bonus of getting lots of Diplodocus DNA! This will save everyone months of Sanctuary Grinding for Diplodocus DNA, so we are very excited about this new championship!

This month we’ve got the Haast Eagle Season in the Arena, and we’re 99% certain that we know the next one! According to the code the next Season should be a Woolly Rhino Season! With Monolorhino arguably being the best Swap-In creature in the game, this Season will also prove very useful and will also save lots of Sanctuary Grinding for Woolly Rhino, as this creature did become Event Exclusive in the latest Update!

Change in the Armor Weekly Event

There is one final thing we can report on thanks to the datamine and that is that there have been some changes in the Armor Week Epic Pool. We all know that Ludia has shaken up some of the Weekly Events, but Armor was always the one where we cared most about the Epics. And those Epics did change! Where it was previously a mix of Amargocephalus, Sinoceratops and Carbonemys, two of those creatures got out and now we have the amazing mix of Ankylosaurus, Carbonemys and Scutosaurus! Getting Ankylosaurus back in the Armor week is a very welcome change, especially seeing how good its Unique hybrids Trykosaurus and Diorajasaur are! Scutosaurus is an Arena Exclusive and Carbonemys can be difficult to hunt for as a Global Epic so we are glad about the change to Armor Week!

So a lot of stuff happened this week with Update 2.0+. The datamine revealed lots of interesting information and Update 2.0+ changed some stuff up pretty well. We still believe Instant Invincibility Taunt is broken (as in overpowered) but Ludia has mentioned they are looking into it, so we should give them some time to change it. Do you like all the changes that happened? Let us know in our Discord Server! We hope to see you on there!