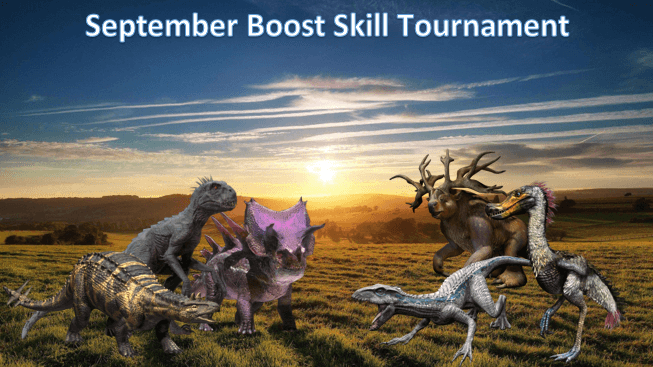 It’s tournament time again! And this weekend is special because it’s a legendary tournament featuring (for the most part) just legendaries! No more compies. No more Woolly Rhino. No more epics! With that being said, there are still rares and commons allowed (but none can really compete). So allow me to help guide you through what you’ll probably see this weekend and how to handle it.

This Tournament is a Rare, Common, and Legendary Creature Tournament. The rewards for this Tournament are boosts, and a lot of them. These are an important resource that only comes by once in a while, so make sure to partake in this event and get as many as you can.

First up, the big dog this time around like last time will be Coelhaast. With 130 speed, decent damage, and the absorb ability, this thing is a monster. On top of that, you have running synergy as well as many precision effects. And with fearless alert, this thing is a pain in the rear to take down. If you have it, use it.

Want to take down Coelhaast? Your best bet is Carnotarkus. With slowing abilities as well as the counter to eat up its evasive turns, Coelhaast doesn’t stand a chance.

Next up we have the armadoggo: Megistocurus. This has the highest swap-in damage in the format with the ability to bypass shields as well. And with no escape, it’s a good option to swap in pick off a creature before the opponent can manually swap out. And with a decent moveset and good resistances, this guy is not the kindest opponent on the field either. This is something you want to throw on the team as well.

Want to take down this swapper? Scutophicyon is a great bet due to it being faster and having no escape to trap it. Or, if you can predict it coming in, swap to Monostegotops, especially if you know it’s below 1000 hp AND the creature you’re swapping from is faster (so the no escape doesn’t activate).

Moving on to a creature that is quite important being the best counter to another top tier, Carnotarkus makes its way into battle. Being a great Compsognathus counter, Carnotarkus is also really good for Coelhaast, as well as so many other creatures allowed in the format like Scutophicyon and Eremoceros. With so many tools in its arsenal, Carnotarkus is a solid creature that you should heavily consider as a team player and a threat.

Want to take down Carnotarkus? Scorpius Rex is an amazing option for this task. With distraction and damage over time, it is a great way to put Carnotarkus in its place.

Speaking of Scorpius Rex, this terror of Isla Nublar is back and ready for action. With swap-in critical ambush as well as camoflague, this guy can always hide behind its evasive abilities. And if it gets the setup, lethal quill shot is quite, well, lethal. Not to mention it can cycle its impact, quills, and camoflague and keep redcuing damage to 0. With an arsenal or crazy resistances good resistances and solid stats across the board, Scorpius Rex is something you should expect to see a lot.

Want to take down this apex predator? Use Eremoceros to block its cunning effects and use your own to cleanse the bleed Scorpius Rex dishes out. And with your precise abilities and distraction resistance, Scorpius is going to run away with its tail between its legs.

Speaking of that majestic beast, Eremoceros is a very strong legendary. With shields that slow, 2 speedup moves, cunning rampage, and good resistances, this legendary has an answer to almost anything. Distract and dodge the fierce, slow the cunnings, and shield those resilients. This inability to struggle with anything makes Eremoceros a pretty good starter. And thankfully the biggest stunner in the legendary/epic format, woolly rhino, isn’t allowed this time, so Eremoceros is loving that.

Want to take down the slothdeer? Mammotherium is a pretty good counter to it. Thanks to its stalling abilities, Eremoceros is a tough legendary to take down, but Mammotherium has the bulk and output to break through it. But Eremoceros loves to swap out, so be careful.

While this flock is not used often in the epic/legendary event because of another epic, this isn’t an epic event. Dodocevia can make a comeback being the bulkiest flock creature around. Without Compsognathus, Dodocevia has a chance to be viable. With revenge abilities and gigantic output, Dodocevia isn’t playing nice. And with a swapper behind it, alert decoy allows it to kill almost everything in the format IN ONE HIT! They may look goofy, but these birds are no laughing matter.

Want to take on Dodocevia, use a faster flock. Coelhaast can easily distract them and take their massive hits with ease. Eremoceros is another good option being able to just tank their hits with shields and distraction.

While Megistocurus is a great swapper, there are others that can also work quite well. Dracoceratops is going to live in infamy as the most hated legendary of all time. While it’s not what it used to be, swap-in savagery is still a good move to use, and with a good damage stat, pin immunity, and cleansing impact, Dracoceratops is going to keep hitting and running over and over again.

Thankfully Dracoceratops lost regeneration and can be worn down easily. But it’s a good idea to try and keep it on the field as long as possible. Rinchicyon is great for this with its on escape collision. Also if you predict a Dracoceratops coming in, swap to Monostegotops. That way it gets stunned before it can use savagery.

Want to take down Monostegotops? Scutophicyon has an answer to all of its tricks while also being faster and immune to stuns and slowing, which Monostegotops loves to do.

Scutophicyon is a dog that knows many tricks. With shattering, shields, and slowing, Scutophicyon can answer most of the legendary meta quite well. It’s faster than all the swappers at 118 speed. It can slow those faster than it while also being immune to deceleration, so something like Eremoceros can slow it back. It also is able to trap any opponent, which is especially deadly if it sets up revenge protection with decelerating rampage now ready to go. This is just a really solid legendary that you should heavily consider.

Want to take Scutophicyon down? Scorpius Rex is a great option due to its many distraction and evasive abilities, as well as the ability to break shields. And when the quills are ready, you can trick an enemy Scutophicyon player to spam cleansing strike by threatening them with the bleed before it’s too late. No escape also isn’t helpful for it here due to Scorpius Rex’s pin resistance.

Next up we have one stunning cat. Smilocephalosaurus is a cunning that has a lot of tools going for it. It has a swap-in ability that stuns while also having rampage and run, allowing it to swap into a Scorpius Rex or Monostegotops. Not only that, but you also have a great turn 1 burst option in precise pounce. And if you want to cleanse yourself, you have deliberate prowl at your disposal. Smilocephalosaurus also has great stats and resistances. This is a creature that can always put a dent into a team.

Want to take down Smilocephalosaurus? Use something even faster like Coelhaast to punish Smilocephalosaurus for swapping while also being able to absorb the big hits it dishes out and hit through those evasive abilities.

Speaking of speedy stunners, Phorasaura is always going to make an appearance in any event its in. Instant rampage is such a strong tool that cannot be ignored. And with good resistances as well as good stats across the board, Phorasaura is a great option to choose if you want to hit first and hit hard. And with a running move and swap in, Phorasaura is never out until it’s out.

Want to take this bird down? Make sure you kill it in 3 turns by exploiting the weakness it has with delayed rampage and run. Also, slowing and shielding Phorasaura’s abilities with something like Eremoceros is a great way to take it on.

Sneaking its way into this event is Indoraptor gen 2. With the infamous cautious strike, this legendary rivals Dracoceratops in terms of hatred. Nowadays it’s a shadow of its former self, but it is still able to take on some of the biggest threats around. It can deal with many cunnings like Phorasaura and Coelhaast while also taking creatures like Scutophicyon on pretty well. While not the top legendary around, the anti-flock role Indoraptor gen 2 has is something to heavily consider.

Want to take this cunning creature down, shields and armor are very good. Eremoceros and Mammotherium are very good options to take down this creature. Mammotherium is very tanky and can eat up Indo’s chip damage.

Mammotherium is a resilient that can dish out enough damage to make some fierce cower. With persistent ferocious strike and dig in, this rhino can heal a lot of hp. And with high damage with access to both vulnerability AND persistent ferocious strike, don’t expect to get away from this guy in good shape. And to top it off, it has stun immunity, so you cannot just stun the pfs away from it.

Want to take down Mammotherium? Use creatures that can break though it’s armor and tank its hits. Carnotarkus is great at this with its rending counter and shields to take hits and dish them back out.

Finally, we have the two new legendaries. First up is Rinchicyon. This furry little fellow can really pack a punch thanks to devious strike. This allows Rinchicyon to buffs its critical hit chance while also being able to tank a good amount of damage. It has access to tools that can allow it to deal with tanks, as well as a move that can be good for synergy or just to deal raw damage. And with high speed, Rinchicyon is good for outspeeding most of the creatures in the format.

Want to take this little guy on. Use a big brute like Mammotherium to knock this small guy to the ground.

Finally we end on Glyptoceras. However, this is a creature you want to avoid. It’s very slow, has good output but needs time to get itself going. After an instant charge this creature doesn’t have much left in the tank. It has SOME good matchups, but not too many to consider using.

There are other good legendaries out there like Allosinosaurus with its raw power, Grylenken, with its high damage, trapping and synergy, as well as the wall Alankylosaurus and its many shields.

While this is an event dominated by legendaries, there are other options available for people who don’t yet have many legendaries available to them Suchotator is probably the best rare to use, especially with lethal wound allowing it to deal with those pesky flocks. Albertosaurus comes to mind when it comes to pure power thanks to killer instinct. Compsognathus gen 2 has a better time dealing with Coelhaast than most legendaries. Archaeopteryx is a great closer. Dracorex is good for dealing with Coelhaast’s on escape. As for commons, there are fewer, but still decent options. Glyptodon and Eremotherium are the two best, with others like Sarcosuchus, Triceratops gen 2, and Velociraptor not far behind.

That's all for this weekend really. Hopefully the RNG is in your favor and that you get as many boosts as you need. Also don't forget to dart you legendaries and uniques these next 2 weeks. Happy playing.