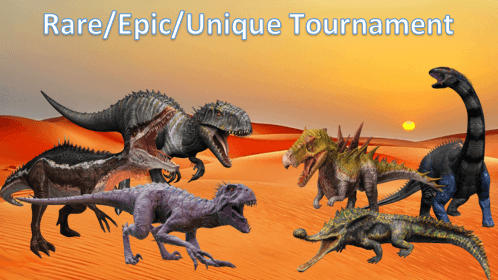 It’s tournament time again and this one is going to be a bit interesting. This weekend we got uniques along with rares and epics. It’s my job to help you find what to use for this upcoming tournament and the prepare for what’s coming. So, with that said, let’s hop in.

This Tournament is a Rare, Epic, and Unique Hybrid Tournament. The rewards for this Tournament are boosts, and a lot of them. These are an important resource that only comes by once in a while, so make sure to partake in this event and get as many as you can.

Unfortunately, there aren’t many good choices from these rarities. They are all just easily outclassed in almost every way. However, Argenteryx is an epic that can actually do some work this time around. With it being a flock and its many evasion moves, Argenteryx is an absolute tank. And because it is threatened at 2 members instead of 3, fearless alert allows it to rally heal at 2 members, allowing it to be the ultimate dodge tank. This little guy did well last time and is something that players at lower levels needs t throw on ASAP. There are other good epics and rares to choose from. Megalotops is a solid monster with probably the best strike in the game, and Thylacotator has its terrifying wound to takedown combo. As for rares, the pool is even smaller. Suchotator and Purrolyth are solid all-rounders that can do well against some uniques.

This is where the real action happens. If you don’t have any uniques, then you probably won’t reach that high of a rank. It’s a shame, but it’s true. So, with that out of the way, let’s start off with the real big boys.

This guy was king last tournament, and this time will probably be no different. Testacornibus just refuses to die in both the meta and in battle. With great resistances, great speed, amazing bulk with counter power heal, and an on escape, Testacornibus is the ultimate tank. And with devastation paired with superior vulnerability, this thing hits hard.  If you have Testacornibus, use it. Don’t bring just one counter, but multiple. Testacornibus is the threat to look out for, so be prepared for a long battle.

Next up is another top threat. Phorurex is the ultimate revenge killer. With high speed, 2 rampages (one being instant), a swap move, an on escape move, and critical sidestep, Phorurex is just loaded with options.If you have it, use it. Phorurex is an absolute must with all those options available to it.

Moving on we have Skoonasaurus. Despite its “nerf”, Skooonasaurus still has many options available to it and in many scenarios, it got a buff. Like with Phorurex, now it can speedtie it when Phorurex has a speed boost but is slower. And with the counter doing a full attack, many of those vulnerability-immune creatures like Testacornibus are going to take a bigger hit. In the end, Skoonasaurus didn’t really get nerfed, but rather just got changed and is still a threat to watch out for.

Here we have another 2.10 creature. Indotaurus is a creature with many tricks up its sleeve. It has decent resistances, great stats, and a beastly moveset. With cloak and a 33% rending counter (also paired with high hp), there is a reason this guy is really good. Not only that, but it essentially has cloak on escape as well, so this thing is a great trapper. And with 1600 damage, this thing is no slouch and doesn’t need to rely on cloak. And with cleansing rampage, distraction is futile. The only downside is the speed, but despite that, Indotaurus still has what it takes to be a top tier threat.

Speaking of counters, let’s talk about another creature with one. Spinoconstrictor is absolutely loving the buff it got not too long ago. With evasive wounding strike and a bleeding counter, there aren’t many creatures that can resist this damage over time. And for those who do resist it, it has a rampage for 2600 damage on top of that. And in order to prevent those pesky swappers from ruining its day, Spinoconstrictor has on escape evasive strike to help tank an incoming hit. Do not take the snake lightly, as it will take a big chunk out of any team.

Going along with the bleeder train, Scorpius Rex gen 3 leaps into battle. With probably the best move in the game in toxic quills, Scorpius Rex gen 3 makes so many creatures like Trykosaurus and Diorajasaur practically obsolete. Not only that, but Scorpius gen 3 has a swap in that buffs its speed from 119 to over 150, allowing it to outspeed pretty much anything. And when toxic quills are on cooldown, it luckily has good output in the form of cunning rampage. If you have this guy, use it.

Another creature that specializes in distraction is Antarctovenator. Antarctovenator is a wildcard for a reason. It can easily wrestle with fierce creatures like Trykosaurus, bust through tanks like Testacornibus, and remove the evasion effects of cunning creatures with the powerful revenge definite rampage. On top of that, it has one of the best set of resistances in the game. And to top it all off, it has the medium nullifying counter to make sure no one gets any positive effects.

Speaking of great resistances, let’s talk Monolorhino. Monolorhino is a creature that has always stuck around. With its classic swap move, Monolorhino is a huge team player. Not only that, but it has decent matchup success with creatures like Spinoconstrictor. With great bulk, decent output, and great team synergy, expect to see Monolorhino. It has been the best swapper for a while, but now it faces a rival looking to steal its title.

Parasauthops is the new kid on the block. With swap in fierce strike for 1550 damage, this guy surpassed Woolly Rhino for the most damage on a swap in the game. And on top of that, this guy does not die thanks to its 2 healing moves, which can be a pain when combined with its high damage. It does decent output on the field with revenge resilient rampage. However, this thing is more similar to Dracoceratops with regeneration than something like Monolorhino in the sense that it can just swap, heal, swap. Oh, and speaking of healing, this guy has counter power heal, so you need to hit this guy really hard. This thing is going to be a popular pick, so be prepared for it.

Slowly making its way into the fray we have Entelolania. Despite not liking Scorpis gen 3 at all, Entelolania is able to stick in the meta because of one creature: Testacornibus. That deer bends the meta around it, and Entelolania benefits from it being able to face Testacornibus head on. With ferocity, high damage, and devastation, Entelolania lays the hurt on anything really. Heck, last unique tournament, I dropped Skoonasaurus for Entelolania because of Testacornibus because that’s how big it is. But with a solid moveset, great output, and solid bulk, Entelolania will take down any deer in a pinch.

That’s really it for this weekend. There are still a few more options to choose from. You have the newly-buffed Stygidarex, Grypolyth for Testacornibus, Geminititan for leading, the newly-buffed Quetzorion may be something to pick up, Magnapyritor for Scorpius gen 3, Compsocaulus and their absorb ability, or Trykosaurus for, again, Testacornibus. This tournament is for boosts, so try to grind as hard as you can. So good luck and have fun. Also don’t forget to dart all your epics today, as it’s only for one day today. Happy playing.