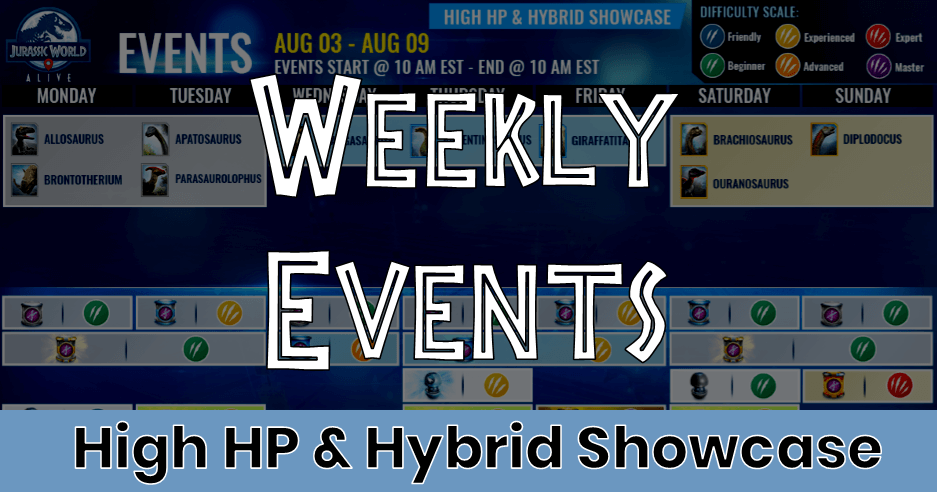 Explorers! This week we've got a very interesting week, as we have the HIGH HP week handed to us! This week is filled to the brim with amazing choices for all rarities, especially the Epic ones, where you will have to really think hard on what you want to go and dart! For the Strike Events we got the Hybrid Showcase theme, which is also filled with some great creatures! Let's go over everything this week has to offer! 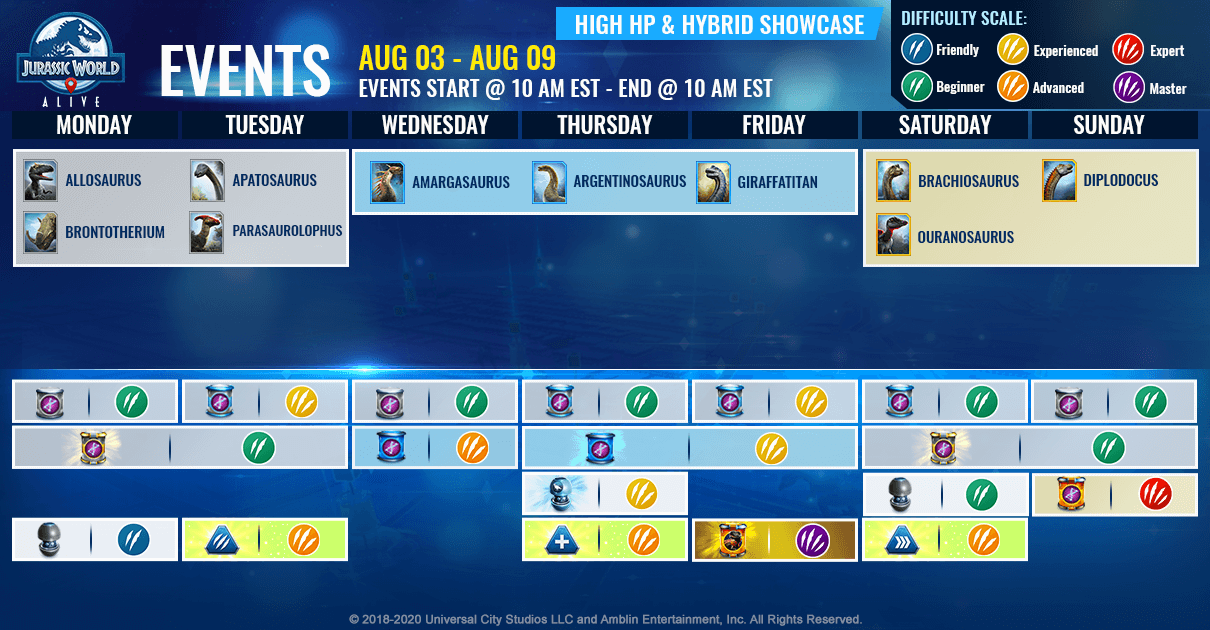 These Commons aren't really that spectacular in the grand scheme of things. Allosaurus is a Global Anytime which will be useful to create Allosinosaurus and subsequently Thoradolosaur, which are great creatures in their own right. Apatosaurus is a Global Day/Dawn/Dusk with tons of hybrids, but they aren't really spectacular except for Stegodeus. Then you have Brontotherium who is an Arena Exclusive creature which has a hybrid in Brontolasmus, who isn't making a big splash in the Arena as well. Finally you have Parasaurolophus, A Local 4 Anytime Spawn, who has two Legendary hybrids in Tragodistis and Paramoloch, who also has an Unique hybrid in Tuoramoloch.

With these Commons you can basically dart whatever you want, but if we had to give advice we would say to go for Parasaurolophus, especially if you don't have access to a Local 4. Tuoramoloch is one of the best creatures for Raid Support with how great of a Healer it is. If you are not interested in Raids, we will call to the Exclusivity argument and say that you should go for the Arena Exclusive Brontotherium, as Brontolasmus still can get a superhybrid.

Lots of Sauropods this week. Amargasaurus is a Local 1 Dawn/Dusk/Night Spawn, used to create Gigaspikasaur, Amargocephalus and Tragodistis, who don't make a big impact on the Arena. Giraffatitan is a Local 1 Anytime Spawn used to create Nodopatotitan, which is quite tanky but lacks the offensive power to make a big Arena impact. Finally, we got Argentinosaurus, which is used to create Ardontosaurus and subsequently creates Ardentismaxima. This will be our recommendation to dart, as Ardentismaxima is possibly the most powerful creature in the game right now. Argentinosaurus is also quite Rare (pun fully intended) as it is a Daily Rare Spawn on Monday. So be sure to dart as much of this green sauropod as possible!

This is where the hard part is for this week. All of these Epics are amazing for their Unique and Legendary hybrids. The Local 4 Anytime Spawn Ouranosaurus is a great Healer creature which is useful for Diloranosaurus and Diloracheirus, who are both top-tier Healers in their respective rarities. Diplodocus (Event/Sanctuary Exclusive) also has an amazing Unique creature in Geminititan, who isn't as great as last patch but still amazing to play with. Finally we have Brachiosaurus, who turned into an Event/Sanctuary Exclusive this patch as well. We all know how great Ardentismaxima is this Update, so going for it is no bad choice at all.

These Epics are all amazing, but if we would recommend any creature we would be torn between Diplodocus and Brachiosaurus. Both of these Epic sauropods have great hybrids and the choice between the two really depends on what you need. We would suggest going for Diplodocus though, as Diplodocus usually isn't featured as often during these Showcases as Brachiosaurus is, with Brachiosaurus often being featured in the Jurassic weeks. However, as rare as Diplodocus is, there is no denying how powerful Ardentismaxima is, so you should really just go with what you feel is best.

The Strikes this week are Hybrid Showcase themed. We've had this Theme a couple of weeks ago on the Weekly Event, but here's the pool if you were wondering what the Theme contains.

Overall, some great creatures available in the Strike Events!

We will have 2 Epic Strikes this week. The Friday Creature Showcase is a Spinotahraptor Strike and the Sunday Epic Strike is a Hybrid Showcase Strike. No mention of the Trials again, but they will probably have High HP rewards, just as last weeks Trials were Debuff themed. This will allow you to get an extra Epic Incubator with the High HP creatures.

We also see the return of the Three Boost Strikes on Tuesday, Thursday and Saturday. It seems like Ludia is making this a regular thing, which is really good! Let's hope that they will be more available though, as last week they were so scarce on the map.

The themed scent this week is Hadrosaurs and has the chance to spawn the following creatures:

We also have 2 regular Scent Strikes. The reward on those can range from a 5 min Common Scent, all the way to an Epic Scent if you get lucky!

This is the second week of the Entelomoth Pursuit and this will mean that the Woolly Mammoth is wild on the map.

This Week has some pretty great creatures! Both High HP and Hybrid Showcase are great themes, so it's great that we got them paired together! Keep an eye on our website and Twitter where we will always try and post the most up-to-date information. Join our Discord as well to keep up with us and with the rest of our community! We hope to see you on there!