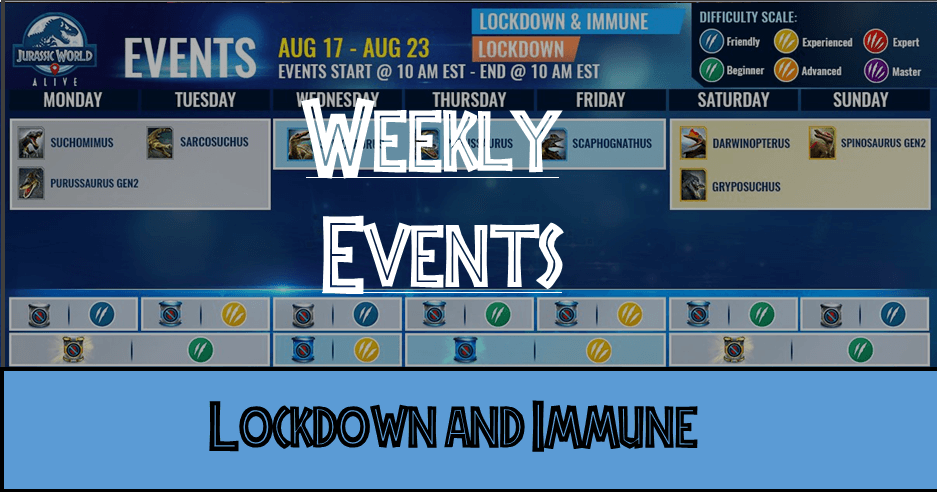 Explorers! Ludia has announced the next set of Weekly Events and we’re actually quite happy with them! The themes this week are Lockdown and Immunity, with the former being in the Green Drops and the latter being available in the Strike Events. Lockdown got an interesting rework this update, adding in some Spinosaurs and birds to the mix as they have received No Escape this update! This is a welcome change, but we are still sad about the loss of Diplodocus in this theme (F to pay respects). However, there are still lots of other great options to dart this week. Let’s go over this Calendar and break it down in detail.

As usual we start with the Commons and there are some real useful ones here. Purussaurus G2 is a Local 2 Day/Dawn/Dusk Spawn used to create Purrolyth and Grypolyth, two great Rending Counterattackers. Suchomimus is a Local 2 Anytime Spawn used to create Thylacotator, which is arguably the best counter to Ardentismaxima and Trykosaurus at the moment. Finally there is Sarcosuchus, an Arena Exclusive creature used to create the amazing Epic Superhybrid Sarcorixis.

If we were to pick one we would go with Sarcosuchus. Sarcorixis is an amazing creature to use both early game and in later stages of the game as well, with people in top arenas reporting great success with it. And seeing as it is Arena Exclusive, it won’t hurt to stock up on it while you have the chance. Otherwise we would suggest going for Suchomimus if you want to level up your Thylacotator, but Suchomimus can be hunted in the wild, and as such we would be inclined to say ‘Go for the exclusive’ and dart Sarcosuchus.

The Rares this week offer three great non-hybrids which will definitely be useful for the next Tournament set we are getting. Purussaurus is a Park Anytime Spawn so it can be pretty hard to come by. It is used to create Purutaurus and subsequently Carnotarkus, two great Rending Counterattackers, but they did receive a bit of a nerf this Update. Spinosaurus is a Global Anytime Spawn, so it can also be hard to find, as you can’t specifically hunt for it. It is used to create three hybrids: Spinotahraptor, Spinotasuchus and Spinoconstrictor. All of them are great Cunning/Fierce creatures but they aren’t the best in the Arena at the moment. Finally we have the Arena Exclusive Scaphognathus. It is used to create the Epic superhybrid Scaphotator, who unfortunately isn’t the best in the Arena right now and neither is it in Raids.

Because of how many hybrids it has and how hard it can be to come by, we would suggest going for Spinosaurus. While its hybrids aren’t great, they still can be buffed in future updates, and seeing as you will need quite a lot of Spinosaurus DNA to level them, we would suggest using your attempts on it.

The Epics offer a diverse set of creatures, all with their own benefits. Darwinopterus is a Global Anytime Spawn used to create a lot of hybrids: Darwezopteryx, Stygidaryx and Pterovexus, two of them being Unique hybrids. As such you will need a lot of Darwinopterus to work on these creatures. Gryposuchus is also a Global Anytime Spawn with two hybrids: Grylenken and Grypolyth. Grylenken unfortunately is a bit of a let down in the Arena, but Grypolyth is still an amazing Rending Counterattacker. Finally we have Spinosaurus G2 a Global Dawn/Dusk Spawn, so it is the rarest of the group to come by. It is used to create Spinonyx and subsequently Erlikospyx, two amazing Fierce and Cunning creatures respectively.

These creatures don’t present such an easy choice, as they all are useful in their own way. Darwinopterus is the one you will require the most DNA of in order to create all its hybrids, Gryposuchus is also difficult to come by and Spinosaurus G2 is the rarest one out of the bunch. As such, we would advise you to take a look at your team to see what you need. Darwinopterus if you want some great bleeder hybrids, Gryposuchus for some great Rending action and Spinosaurus G2 is the one to go for if you have trouble finding it in the wild and still want to use Spinonyx and Erlikospyx.

This week we have Immunity as the Strike Event Theme. It is interesting to see this theme as Immunity doesn’t exist anymore, as it is replaced by Resistances. But this pool is now filled with creatures that have some 100% Resistances, and you can find the admittedly great pool here:

As for the Special Strikes, we see a very welcome change! On Saturday and Sunday there is an extra Epic Strike Event, featuring Titanoboa! We also have the regular Themed Epic Strike on Friday, this time featuring Concavenator. Combine this with the Sunday Epic Strike and the Epic Trial on Saturday and Sunday and this adds up to get 4 Epic Strikes this week! We also see the return of the three Boost Strikes on Tuesday, Thursday and Saturday. This is the new norm for Boost Strikes and we are happy that Ludia is continuing with this.

We also see the Trials return. They are Lockdown Themed, so you will be seeing the creatures featured on the Map beneath Green Drops in them. They will provide you with a Gold Incubator, a Rare Incubator and an Epic Incubator if you defeat all three of them! Definitely watch out for them!

This week we have three Scent Strikes: a Small one on Monday, a big one on Saturday and a Themed one on Thursday. This week’s Themed Scent is the Charger Scent. This scent will feature the following creatures:

Not the best pool of creatures, but Dracorex is an Event Exclusive, so this might be your chance to stock up on it.

This week is full of great creatures and a welcome extra Epic Strike! On our Discord there is already speculation that this Weekend Themed Strike might be used to promote Event Exclusive creatures, and if this is the case we will definitely welcome it! What do you think of this week? Let us know in the comments and join our Discord server to also be part of our Discord community! We hope to see you on there!