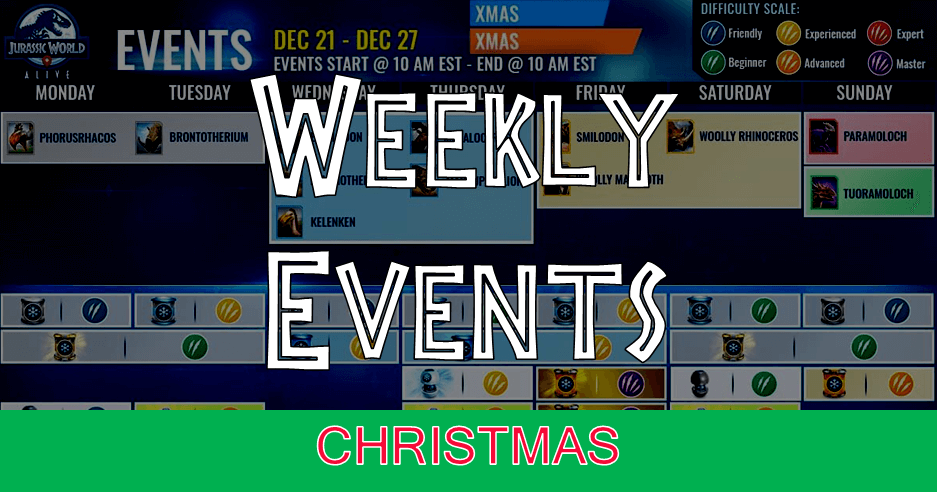 Explorers! This Weekly Event feature celebrates Christmas! This is going to be a stellar week to collect some hard to get DNA. Each set provides some great options, so let's go over what we recommend to dart as well as everything else you need to know! 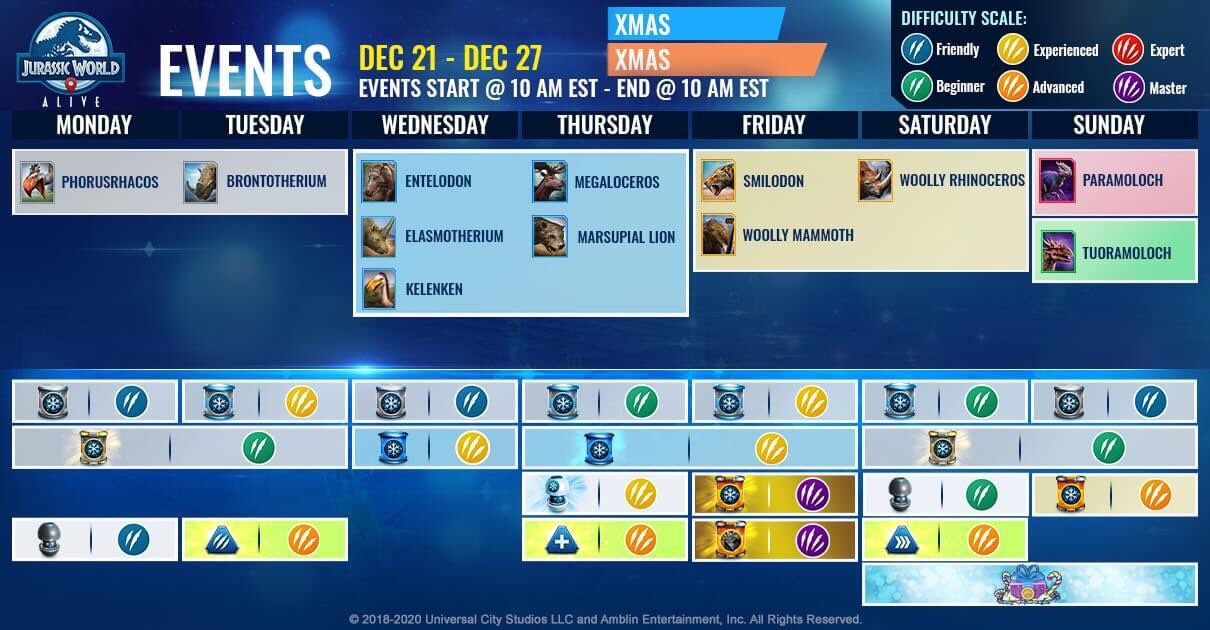 Going with our standard for choosing, we will recommend Bronto on the basis of exclusivity. Its hybrid, Brontolasmus, is fairly present in its qualifying tournaments, so perhaps you'd like to be able to create and/or continue to level. It also does not yet have a hybrid but could receive one some day. However, you might put your priority to be Phorusrhacos due to the limitation to a local and only parts of the day. If your goals include Legendary Phorusaura and/or the new hybrid, Velosrhacos, it's going to cost you a plethora of Phorusrhacos.

It is first important to note here that this week, we only get TWO DAYS for our Rare attempts. And there are A LOT of them. Make sure you finish before reset on Friday, you don’t want to miss out on these opportunities!

This is going to be a little tough, as we are faced with two exclusives, one being more exclusive than the other. Our recommendation will actually be Marsupial Lion, as both it and its hybrid (Thylacotator) are extremely strong. However, plenty of case can be made for Kelenken, as Event Exclusive is actually more exclusive than Battle Exclusive. Events like this week are the only time you currently have access to Kelenken. Kelenken's current hybrid does not stand out which is why we lean toward Lion, However, you may choose to  stockpile DNA or consider leveling the base for qualifying Rare tournaments.

Of the others, it would come down to your personal goals and what you might do with the DNA. Elasmotherium can be pared with the common, Brontotherium, for the Brontolasmus hybrid. You could also go a separate round toward Mammotherium and on to Mammolania. You will ultimately need a ton of Elasmotherium for all of that, so there's no fault if you find this your best time to gather. Entelodon and Megaloceros were once exclusive, so it's very possible you've not been able to collect very much of either's DNA. We still would recommend Lion or Kelenken over any of these 3, but there are valid and fair reasons you may choose one of them.

The answer here is pretty obvious - Rhino, Rhino, RHINO! Not only is Monolorhino a must have in the arena, but many teams are also running high level Woolly Rhino. And let's not forget Rhino also feeds another hybrid, Keratoporcus, which could some day also get a hybrid. Just like Trex, you can about never have enough Rhino DNA. The difference is you can also about never have access to this DNA! GET IT WHILE YOU CAN!

There isn't much we want to say about the others because we feel that strongly your attempts are best suited on Rhino. I have a personal goal to max all the cats, but I'm still choosing Rhino over Smilodon. There's absolutely nothing wrong if you have your reasons to go for the others, so please don't feel like you absolutely shouldn't based on our recommendation.

Sunday: 1 Attempt (at each)

A rare opportunity at some dartable Legendary AND Unique DNA - don't miss out on your single attempt at each! Paramoloch isn't amazing on her own but is a component of the other attempt, Tuoramoloch. Tuora may not be the greatest in the arena, but it proves to be one of the absolutely most important Raid creatures. Very few raid strats do not include a Tuora for her Group Acceleration move.

Strike Events and Trials are also Christmas Themed, so you can expect to get the same DNA as the Featured Creatures from them. On Friday, we have another Epic Strike featuring Antarctopelta, the new EVENT EXCLUSIVE creature! Make sure that you do this one!

Over the Weekend, we'll also get an Epic Trial. On Sunday we have an Epic Christmas Strike. Finally, we've got the regularly scheduled Boost Strikes on Tuesday (Attack), Thursday (HP), and Saturday (Speed). The Thanksgiving week granted us a special emote in the trials, so we suspect we will receive something similar this week.

The Themed Scent of this week is Christmas (Scent of Claws) Scent. This scent can draw any of the common, rare, or epic creatures featured this week. Here is a recap of that list:

The treasure chase continues on Saturday & (hopefully) Sunday. You get once chance each for between 500 and 2,500 coins with distance not mattering. There has also been a chance at a Smilodon emote the past couple weeks. It has been confirmed that their intent is only for one pop per day. We can only hope they have plans to eventually change this to the original treasure chase where they refreshed throughout the day and offered much more opportunity at free coins. We also need to hope they will increase the treasure distribution as much of the community never saw any over both days this past weekend.

This Week concludes the Dracoceratosaurus pursuit, so keep your eyes out for the Rare Proceratosaurus!

Wishing you the happiest and merriest Christmas week with some super fun creatures to dart. With a good lineup front to back, including opportunity at a Legendary and Unique, we hope you enjoy this event. Join our Discord Server and let us know what you're darting and why! We hope to see you on there!