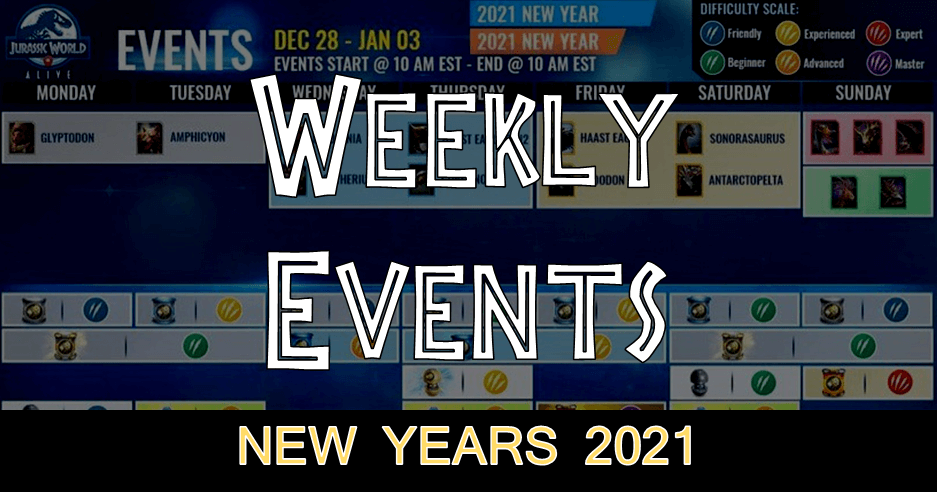 Explorers! This Weekly Event feature celebrates the end of 2020 and start of 2021! This is going to be another stellar week to collect some hard to get DNA. Each set provides some great options, so let's go over what we recommend to dart as well as everything else you need to know! 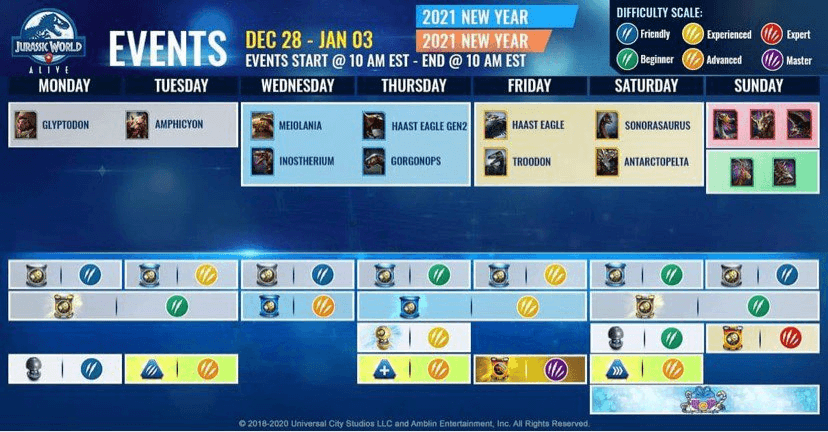 Both of your options this week are about equally fine. Neither have been around very long, and it's possible Local 1 hasn't quite rotated to you yet. Neither currently has a hybrid which of course opens the door to something in the future. There is just no saying when. The one tie breaker we can offer would be that you do need to be moving in order to encounter Amphy. Once you are settled in to Local 1, you are able to draw Glypto with scents.

It is first important to note here that this week, we only get TWO DAYS for our Rare attempts. Make sure you finish before reset on Friday, you don’t want to miss out on these opportunities!

This is another tough week where your personal goals may outweigh our opinions. Ranking from least to most accessible, the order would be Eagle2, Inos, Gorgonops, then Meio. While it may be the easiest to come by, Meio feeds what we'd consider the best hybrid of the group (Mammolania). You should have minimal issue finding this cute little turtle in the wild, so it's hard to recommend you use your attempts on it.

Gorgo and Inos don't currently make any hybrids, but of course there's always that future potential. Eagle2 is currently used toward Aquilamimus and the most rare find of your choices. It's hard to say you'd go wrong choosing any of these so maybe an ideal approach is to spread out your attempts and not focus on just one.

This will make for an incredibly tough decision as 3 out of 4 options are Event Exclusive. Then it might make you wonder why Troodon is included amongst these hard to get options. Is something coming our way they want us to prepare for? Unfortunately, we don't have that answer and will have to make our decisions on what we know now.

So what do we know now? We know Antar was barely introduced in the game last week. But we also know we are currently in an Alliance Championship series where we will be rewarded with this DNA in the final week as well as for the Tier rewards. It's up for debate how good the Unique Antarctovenator is, mostly because it lacks a counter with damage. As with anything, future modifications could be made, and it can't hurt to be ready for that.

We also know Haast Eagle is responsible for the underwhelming Poukaidei which is responsible for the also underwhelming Poukandactylus. Just like with Antarctovenator, however, future modifications could happen. Creatures like Monolorhino have gone from dud to super stud, and who's to say Poukan can't receive the same treatment one day? If Ludia really is listening and plans to take action based on Piere87's recent Open Letter, we wouldn't be surprised for a nice upgrade.

As with Antar, we've also had an Alliance Championship series which rewarded us with Sonora and its Unique hybrid, Skoonasaurus. Skoona isn't really one we're seeing in the arena, same as the others, due to its less than stellar stats and toolkit. It's really tough to put these three in any particular order, but we definitely suggest you choose some combo of these and not use any attempts on Troodon.

A rare opportunity at some dartable Legendary AND Unique DNA - don't miss out on your attempt at each! None of the options truly stand way above the others, so you'll have to decide what's important to you. Grylenken and Eramo do not currently have Unique hybrids but could some time in the future. Poukaidei currently does, but it isn't anything great at this time. Of the 3 on their own as Legendary creatures, Eramo holds an edge over the others. Poukadei is the toughest to work on with a component being Event Exclusive, but it takes 500 Sloth per fuse in order to make and level Eremo. One of Grylen's components, Grypo, also is needed for Gryposuchus, so some fuseless opportunity can seem pretty nice.

Of the two Uniques, we've already talked about how currently underwhelming these hybrids are. We've also made multiple mentions that things can change, though they can also change for the negative. Both have been rewards in Alliance Championships (well, Antarcto is in progress). Both have a component that is Event Exclusive (Nasuto > Carboceratops > Testa, Antarctopelta > Antarcto). There isn't really much we can see that holds one higher priority over the other. Ultimately, it will be up to what's important to you, and which you think has better future opportunity.

Strike Events are also New Years Themed, so you can expect to get the same DNA as the Featured Creatures from them AS WELL AS several others (including some Hybrids!): Here are the selections that are in addition to the weekly event creatures:

Trials are swap-in themed, and successful completion can yield the following rewards:

On Friday, we have another Epic Strike featuring Secondontosaurus.

Over the Weekend, we'll also get an Epic Trial. On Sunday we have an Epic New Years Strike. Finally, we've got the regularly scheduled Boost Strikes on Tuesday (Attack), Thursday (HP), and Saturday (Speed). The Thanksgiving & Christmas weeks granted us a special emote in the trials, so it's very possible we'll receive something similar this week.

The Themed Scent of this week is New Year Scent. This scent can draw any of the common, rare, or epic creatures featured this week. It is entirely possible they will also contain the extra creatures listed above, but we will not know until the scent is made available for purchase on Wednesday. Here is a recap of the featured list:

The treasure chase continues on Saturday & (hopefully) Sunday. You get once chance each for between 500 and 2,500 coins with distance not mattering. There has also been a chance at a Smilodon emote the past couple weeks. It has been confirmed that their intent is only for one pop per day. We can only hope they have plans to eventually change this to the original treasure chase where they refreshed throughout the day and offered much more opportunity at free coins. We also need to hope they will increase the treasure distribution as much of the community never saw any over both days this past weekend.

This Week begins the Poukaidei pursuit, so keep your eyes out for the Epic & Event Exclusive Haast Eagle! Here's hoping for even a quarter of the spawn rate we saw with Procer last week!

The link below is available from Monday, December 28th at noon EST -  Sunday, January 3rd at noon EST.

Wishing you the happiest new year with some super fun creatures to dart! With a good lineup front to back, including opportunities at a Legendaries and Uniques, we hope you enjoy this event as you roll in to 2021. Join our Discord Server and let us know what you're darting and why! We hope to see you on there!