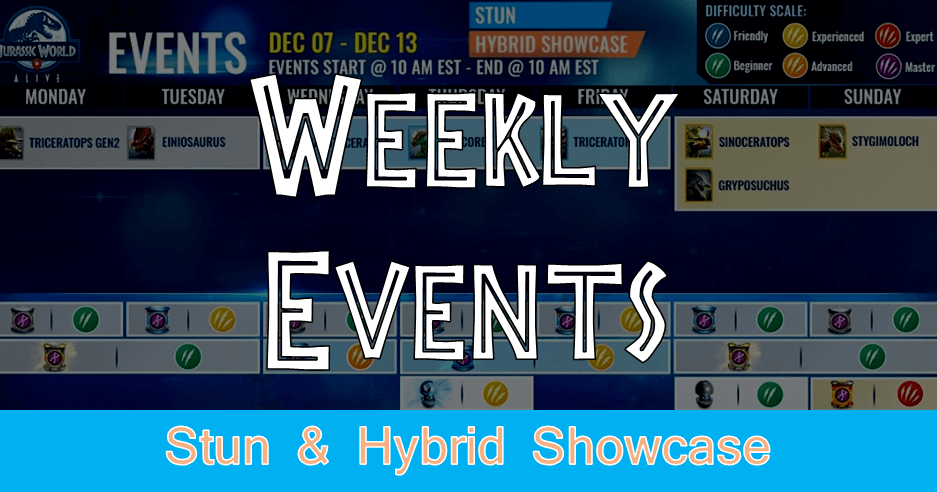 Explorers! We've got a week of Stunners and Hybrid Showcase (a.k.a. Hybrid Heroes) ahead of us. Let's go over what we recommend to dart as well as everything else you need to know! 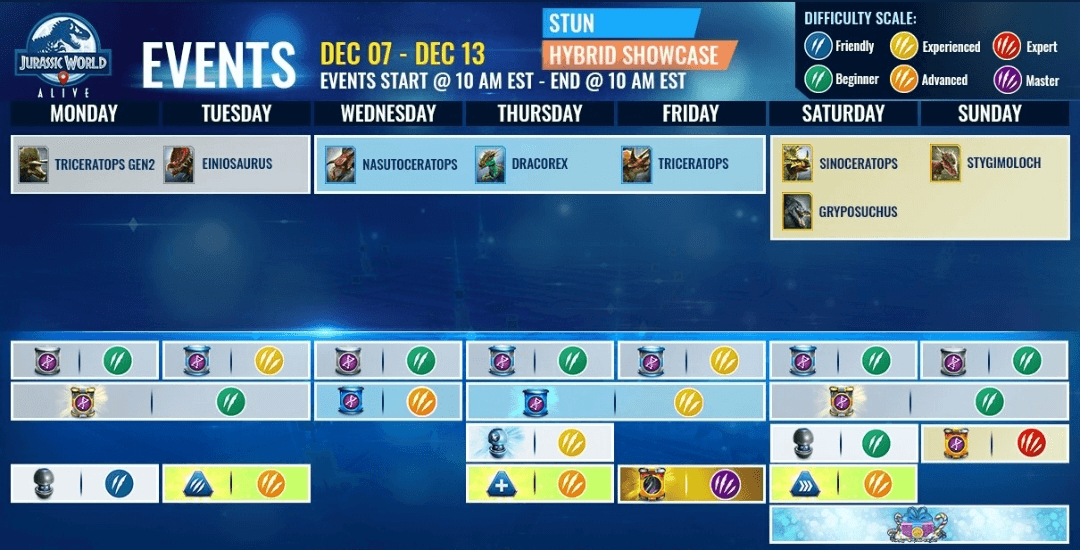 Both of the commons for this week are global, so our suggestion will be for you to follow what best suits your goals. However, we would lean a bit toward Einiosaurus, especially if you still need to create or want to level Sarcorixis. It is going to be a main staple of the December Alliance Championships tournaments, as all weeks allow for Epic hybrids. Even Einiasuchus, the connector between Einiosaurus and Sarcorixis, is usable for the first two weeks.

If your goals are more about Dracoceratops and/or Dracoceratosaurus, then you might want to use your attempts on Triceratops Gen 2. The fact that it is available everywhere, all the time, and that it will be part of the currently running Dracoceratosaurus hybrid pursuit just turns us off to this one for this week.

Just when we barely survived the impossible decisions Ludia threw at us this past weekend, now here we are facing dualing Rare exclusives. As you've probably guessed, we will not recommend you use your attempts on Triceratops. Even though they're only roaming the wild one day a week, that is one more than the zero days we see the other two.

Our suggestion leans toward Dracorex as the best choice. That little green monster not only feeds a great hybrid in Utarinex, it is crazy good leveled on its own. We have seen upper arena players roster an over leveled, boosted Dracorex on their arena team, and of course it crushes in eligible tournaments.

Nasutoceratops is not a terrible other choice if that might be your preference. For now, the Unique it ultimately creates (Testacornibus) isn't very strong in the meta. However, we've seen metas shift and change as time goes by, so it couldn't hurt to stock up on this DNA.

This week feels like tough decisions but not for the same reasons as last. None of these three really stands out in this crowd, all with their own merits and great hybrids. Like with the common attempts, this may come down to your personal goals.

Both Gryposuchus and Sinoceratops feed multiple hybrids, so you're going to need a lot of each for all that feeding. Stygimoloch is a base ingredient for raid darling, Tuoramoloch, so you'll want to focus here if building a serviceable Tuoramoloch is on your docket. Both Gryposuchus & Stygimoloch are also fine choices to over level and use for qualifying tournaments, while we can't say the same for Sinoceratops.

Strike Events and Trials will be Hybrid Showcase this week. The following DNA will be awarded for successful completion:

On Friday, we have the introduction of Aquilamimus via Epic strike, and on Sunday we have an Epic Counter Attack Strike as well. During the Weekend, we'll also get an Epic Trial. Finally, we've got the regularly scheduled Boost Strikes on Tuesday (Attack), Thursday (HP), and Saturday (Speed).

The Themed Scent of this week looks to be Raptor Scent. This scent features some good stuff. Here is the full list:

The treasure chase continues on Saturday & (hopefully) Sunday. You get once chance each for between 500 and 2,500 coins with distance not mattering. Along with the holiday theme, you can also receive Boosts from the chests. It has been confirmed that their intent is only for one pop per day. We can only hope they have plans to eventually change this to the original treasure chase where they refreshed throughout the day and offered much more opportunity at free coins.

This Week begins the Dracoceratosaurus pursuit, so keep your eyes out for the global spawn, Dracorex Gen 2!

GamePress is excited to be able to provide weekly cash links worth 50 cash in game. The code can only be claimed once a week and you must click on it using the device you play JWA with. It will be active from Monday, 12 PM EST - Sunday, 12 PM EST every week. This is a promotional code provided courtesy of Ludia, Inc and is exclusive to GamePress. We will post this link in an article we publish each week. We will post all articles on our Twitter so follow us at NewsJWA on Twitter so you don't miss out!

Stun & Hybrid Showcase brings about another great week of options. Join our Discord Server and let us know what you'll choose to dart and why! We hope to see you on there!