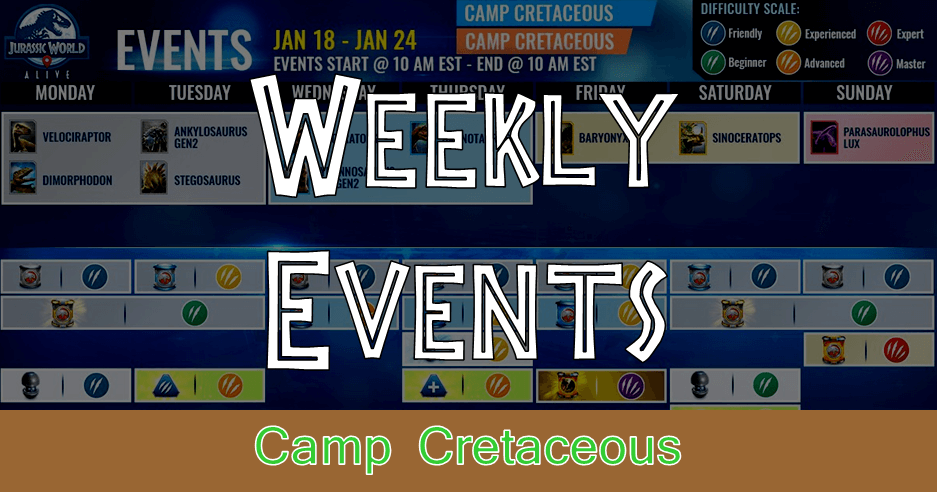 Explorers! This week is all about Camp Cretaceous. It will be another fun week to collect DNA and culminates with a Parasaurolophus Lux attempt. Each set provides some great options, so let's go over what our Discord community is thinking and what we'll recommend to dart as well as everything else you need to know! 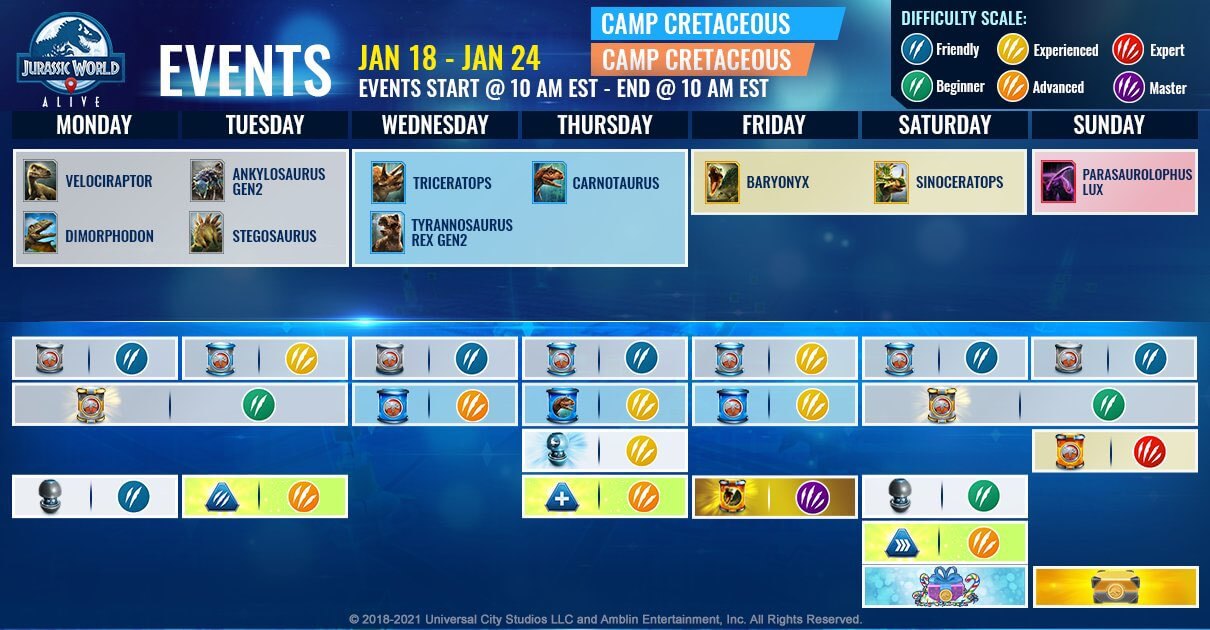 So what are the people saying? Interesting enough, the vast majority of voters are targeting Velociraptor this coming week. We can understand why, as it takes thousands of Velo if you want to build Indominus Rex and/or Erlidominus. Being a global, anytime spawn, we would prefer to set our sights on something more exclusive.

Of the remaining 3 choices, Dimorph is the most exclusive, as you can only acquire this DNA through battle incubators & special events. Its hybrid, Dimodactylus, isn't top notch by any means, but it can hold its own as a bleeder (with no escape) in qualifying tournaments. While we won't be seeing any creature balancing this update, that isn't to say that down the line Dimodact could get some special treatment OR possibly a super hybrid. We would suggest stockpiling exclusive DNA while you have the opportunity.

Our other two choices are both available one day a week which of course is its own limitation. Ankylo2 is required for Ankylocodon which is getting a super hybrid once update 2.4 happens (we assume Tuesday). It also feeds Legendary Alankylosaurus which could, one day, receive a super hybrid of its own. You're going to need A LOT of Ankylo2 if building these are in your plans. Speaking of super hybrids, Stego might be considered the super hybrid king, as it is a base ingredient to create both Monostegotops and Stegodeus. Each of these once sat near the top of the arena roost but have since been giving adjustments that leave them rarely used (but, like anything, can be great in qualifying tournaments).

First, it is important to note that due to our Legendary attempt on Sunday, we will only have TWO DAYS to complete our Rare attempts. Make sure you get out there before reset Friday (10am Eastern) so you don't miss out!

TRex2 is blowing away the others by our community votes, and it's not remotely surprising. A base component that ultimately is responsible for Tenontorex, a creature valuable in both arena and raids. We'll just need a Tenontosaurus event sooner than later to support the other half. Trex2 is also used for Indom2 which is used for Indo2. While you don't see Indo2 around so much since it got gut punched with a Cautious Strike nerf AND lost it's shield breaking ability, an over-leveled & boosted Indom2 can be a real tough foe. Its going to require very much TRex2 DNA to get there.

Your other two options here have a little more exclusivity, as they are only available one day a week. I'm personally working on Carnotarkus and will likely use my attempts on Carnotaurus to support that goal. If you are using your Common attempts on Stego, we think you'll want to go Tri here to pair them up to make Stegoceratops and ultimately Monostegotops.

We don't feel any of these three stands out any greater than the others and ultimately suggest you make your choice based on your goals.

Our community is all over Baryonyx, and that's likely because (a) it is Battle Exclusive and (b) we just had a Sino event. We absolutely recommend Bary based on exclusivity but also that it is responsible for another major raid darling, Tryostronix. Tryos can also be a viable and formidable arena creature. You will also have a chance at bonus Bary DNA in the Friday Epic strike.

I'm going to copy & paste what I said about Sino last week, as it still holds here. Don't let this sway you from considering Sino, especially if you are newer to the game. Sino will ultimately bring you Thoradolosaur, which has recently stormed back in to arena relevance. Sino also is a component of Utarinex, and its two hybrids can perform very well on their own. However, we just received Sino DNA in the DNA Tournament & will receive more in the final AC rewards

I don't think we need to convince you to get out and take your rare opportunity at darting a legendary. Even though this one can be found in the wild, it is quite rare. I've only seen two and have heard several people comment they'll finally get to see one.

Strike Events and Trials are also Camp Cretaceous themed and will reward the same DNA you will find at the event drops. Please note sometimes they throw a curveball with a different theme for Trials. This article will be revisited and updated should that be the case.

On Friday, we have another Epic Strike featuring battle exclusive Baryonyx. Over the Weekend, we'll also get an Epic Trial. On Sunday we have an Epic Camp Cretaceous Strike. Finally, we've got the regularly scheduled Boost Strikes on Tuesday (Attack), Thursday (HP), and Saturday (Speed).

The Themed Scent of this week is Carnivorous Therapod Scent. This scent can draw any of the following creatures:

The treasure chase continues on Saturday &  Sunday. As of 1/10/21, we are once again able to chase the treasures through the day! With this set up, the chests are refreshed throughout the day and offer up to 25,000 free coins.

This Week concludes the Inostherium pursuit, so keep your eyes out for common Archaeotherium!

Camp Cretaceous is a fun way to celebrate the animated series with some opportunity at the stars of the show. New for 2021, we are going to reach out for more community input on these weekly event roundups. Join our Discord Server and let us know what you're darting and why! We look forward to your input and hope to see you on there!