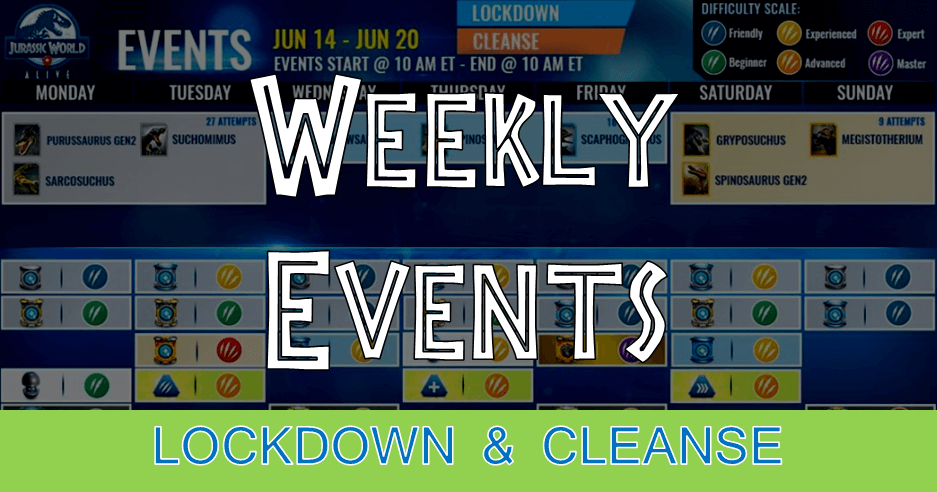 Explorers! Coming this week, we have dual themes in Lockdown for event drops and Cleanse for strikes & trials. We had a Lockdown event in December, so let's go over what  we said then, what our Discord community is thinking, and what we'll recommend to dart as well as everything else you need to know. 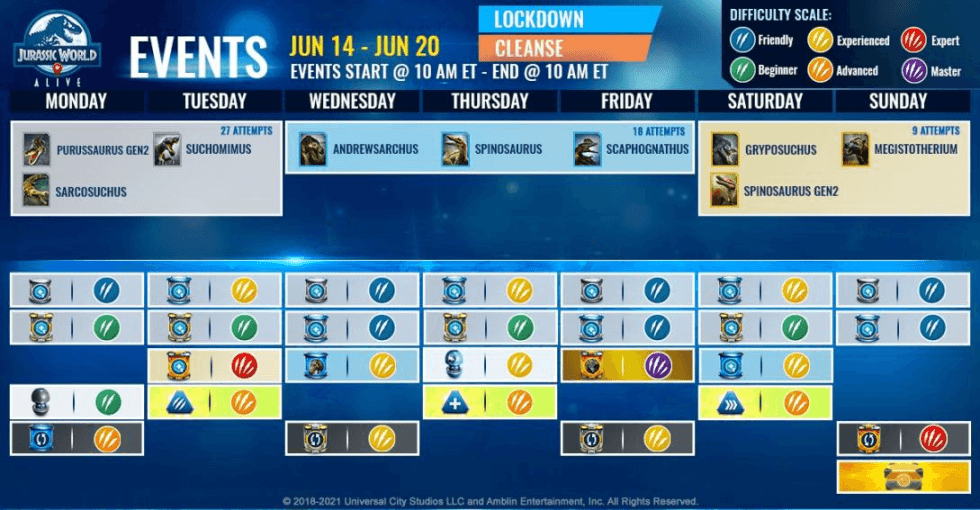 On a glance, these choices may seem underwhelming. Based on the majority of those who answered our poll in our Discord server, that is how the community feels. Most have stated they will simply dart whatever crosses their path. However, just the fact two are exclusive adds appeal. On top of that, they are all key ingredients in hybrids you might find useful in this month's tournaments!

Purrolyth is one of the best Rare hybrids out there, and you'll need to invest a lot of Purussaurus G2 to create and build yours. This DNA was long time park exclusive and only recently was added to the local rotation. Back in November, we'd have suggested Rixis over Pur, but times they have a changed.

On that same themed argument, Sarcorixis lost a little appeal in update 2.7  but wasn't completely annihilated. It can still be viable on arena teams. Sarcosuchus has recently gone battle exclusive, and there is no saying how long it will be before it's accessible in the wild again.

Lastly, we have Suchomimus. As Sucho was a global spawn prior to being battle exclusive, there is a good chance you've already acquired a slew of this DNA. However, Suchomimus is used to create Suchotator which is needed for Thylacotator. Thyla is still a top notch tournament option and another which is a viable arena teammate. We learned this past weekend it can be a solid counter to those pesky flocks and can't fault you if you would choose this to focus your attempts on.

When we had this event in December, we were given Purussaurus in place of Andrew. We wish they might have replaced one of the other two, as Pur would have been a much better option. However, that isn't the case, so let's talk about our deck at hand.

Hands down, we will highly suggest you make Andrew your choice. I'll repeat some of my comments in recent weeks when Andrew was an option. "All hail Andrew! Drew is one of the best rare creatures around and was recently granted a second hybrid that could one day receive a super. I personally can not wait to dart all these dolls later in the week!" Our Discord community is feeling the same with over 50% of those who participated in our poll saying they will be targeting Andrew.

Scaphognathus is the most exclusive of this bunch, and our typical standard is to throw our biggest recommendation based on that. However, there is much more immediate appeal to your other rare options this week. Scaphotator, the Epic hybrid created with Scaphognathus, isn't currently much to write home about. However, if you're just of a mindset to save up harder to get DNA, there's nothing wrong with that.

Lastly, there is Spinosaurus which can be taken in multiple directions. One one hand, you can use yours to create Epic hybrid Spinotahraptor and then on to Legendary hybrid, Spinotasuchus This lineage is of interest, as many players still seem to not realize their No Escape capability (aside from Spinotahsuchus). On your other hand, you have the Unique hybrid, Spinoconstrictor.No matter how you look at it, these options are going to cost very much Spinosaurus DNA.

As with the Rares, we had a slight difference in December with Darwinopterus being a selection rather than Megisto. It is refreshing to see them update their themes finally!

We like this change and would put Megisto at the top of our recommendation list. It has been around the least time and is fairly hard to come by, especially if you are not often on the move. We are getting a new hybrid with 2.8 which fuses Megisto and Doedicurus to create the Legendary Megistocurus. Roughly half of those who voted in our Discord voting poll agree this will be their first choice.

That isn't to say there aren't reasons to support the others. Gryposuchus feeds multiple hybrids, so you're going to need a lot for all that feeding. Gryposuchus alone is also a fine choice to over level and use for qualifying tournaments. We would give the edge to Gryposuchus here based on a major arena force, Grypolyth.

Spinosaurus G2 is also a fine choice, feeding Spinonyx and on to Erlikospyx. Erlikospyx has made a big comeback on arena teams recently. If you've faced one and don't have a resilient counter, you know what a tough little broad she can be. An overleveled Spinosaurus G2 can cause major headaches in qualified tournaments, particularly as many players still haven't caught on to it possessing "No Escape".

Strike Events will be Cleanse themed, and you can win the following DNA for successful completion:

Trials are Swap In themed and with successful completion, you can be awarded:

We have multiple dino specific strikes this week again, this seems to be the new normal. On Wednesday, we will have an Enteledon strike. The strike on Friday will feature the event exclusive Antarctopelta ! Sunday will feature the usual Epic Trial. Finally, we've got the regularly scheduled Boost Strikes on Tuesday (Attack), Thursday (HP), and Saturday (Speed).

There is a basic scent strike on Monday, and the themed scent on Thursday will be Ankylosauridae. This can draw any of the following creatures when activated:

This week begins the Dakotanops pursuit, so fire up those gigas and keep your eyes out for Gorgonops!

Out with the Diplod and in with the Bumpy, our new daily reward for the month of June. Locals have also rotated, and the arena season reward will be Event Exclusive Nasutoceratops.

Ludia took us by surprise and though we are repeating another Alliance Championship, they did not continue the order from 2020. This month will be all about the mighty Geminititan with the second week being an Epic/Legendary (All) Advantage tournament for Arambo & Koola2 DNA. 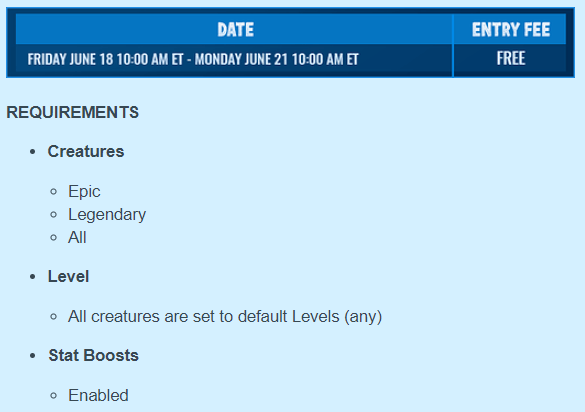 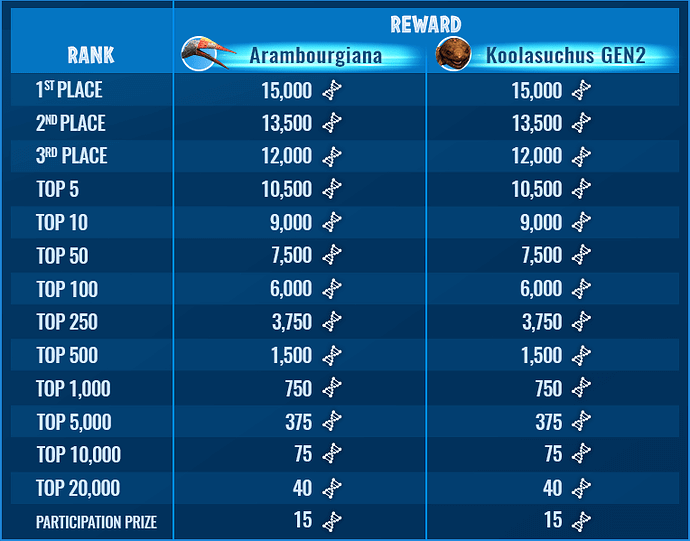 It's going to be a fun week to stock up on our favorite Lockdown and Cleanse DNA. New for 2021, we are going to reach out for more community input on these weekly event roundups. Join our Discord Server and let us know what you're darting and why! We look forward to your input and hope to see you on there!