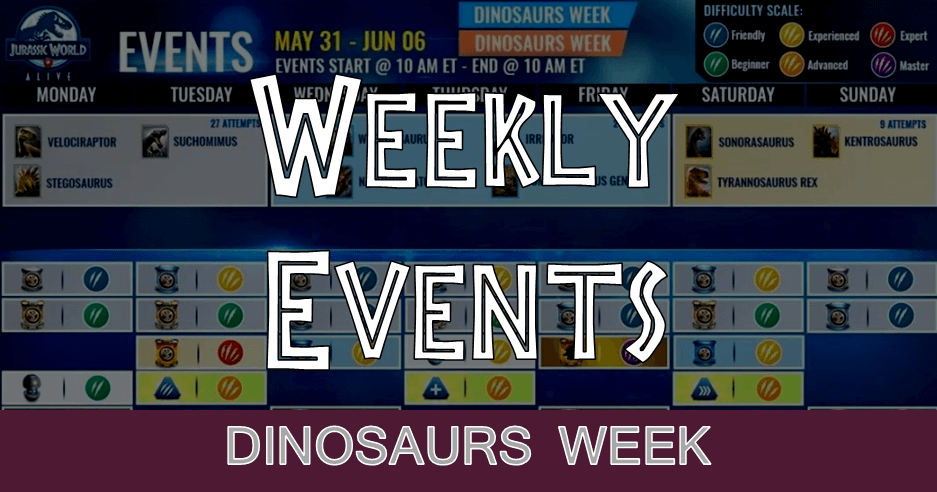 Explorers! Jurassic World Alive is celebrating all things dinosaur with Dinosaurs Week, and they are bringing quite the party! Let's go over what our Discord community is thinking and what we'll recommend to dart as well as everything else you need to know. 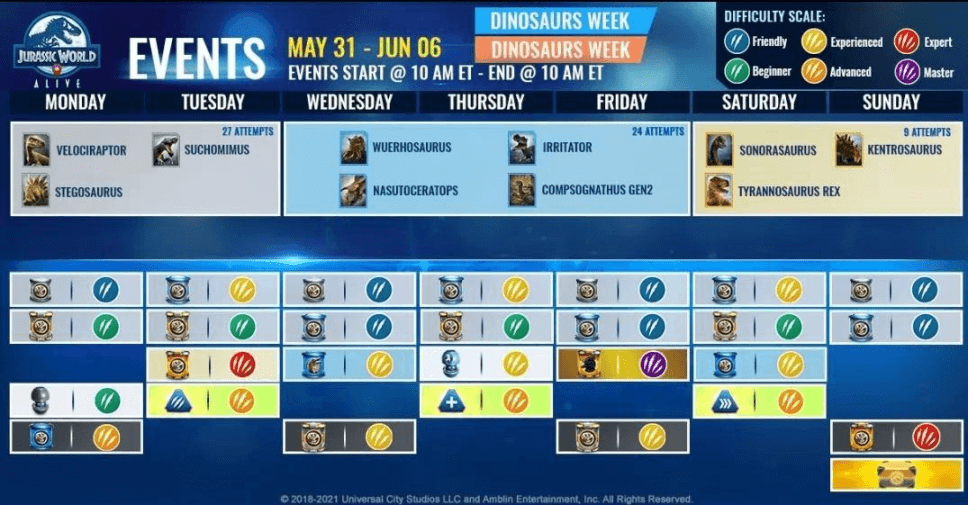 They recently started putting the number of attempts on the calendar again and sometimes stray from the above. Refer to the calendar for the confirmed counts. Each rarity has a different length of time the spawn lasts followed by a different length of time until respawn after despawn. Commons and Rares will last 1 hour with about 5 minutes between. Epics last 6 hours with upward of 30 minutes in between (this information is under review and will be tested this coming weekend).

Our recommendation here will be Sucho for a couple of reasons. Mainly, we haven't seen Sucho as an event choice in over 11 weeks. The others have been featured at least once. We also love Thyla and think we may see a rise in representation on arena teams as flock creatures become more prevalent. Thyla is also one of the strongest around in qualifying tournaments.

Nothing about the other two stands out over the other. Their hybrids are meh, Velo has been featured multiple times over the past few weeks, and it is available everywhere, all the time. Stego may hold a slight edge due to being day of the week locked. With 27 attempts over two days, you might be best suited to just dart whatever you cross. That's exactly what the vast majority of our Discord community  who answered our weekly poll plans to do.

We're faced with a pretty tough decision this week. Two of our options are Event Exclusive, and one is new and seemingly quite OP as far as rares go.

After two weekends of seeing Compy2 in tournament action, it's more and more evident this is going to be a must-have for qualifying tournaments. As it has also been around the least time and still may be a couple months before the local rotates to you, we think this is your top choice this week.

Next up would be Nasuto due to being Event Exclusive. This one has at least been around awhile, so likely you've saved some up. The hybids aren't very appealing at this time, but Nasuto on its own can be nice in qualifying tournaments. I fell victim to many high leveled Nasutos this past weekend and found myself wishing I'd had my own. Not only does it have the swap in stunning strike, it can slow the opponent, reduce the damage, and doesn't get swap prevented (read: great Andrew counter).

Despite Wuerho being Event exclusive, we find Irritator to be more appealing. However, we wouldn't recommend choosing either of these over the other two choices. The once mighty Mags has lost much appeal with all the swap ins abounding. She is just too frail to survive long enough to deal even a couple hits of damage. You might notice most top arena teams have sent her to the bench. I do, however, still find mine useful for strike towers even unboosted.

Not surprisingly, the majority of those who answered our poll in our Discord server are going after the little Compy2s. Irritator holds a strong second with Nasuto just behind. What are some reasons behidn these choices?

"I plan on darting Nasuto because it's exclusive, and I'd like to stockpile up on it despite lvl 30 Nasuto and Cornibus. I'll be in Compy G2 zone next month so I'll dart a bunch then." - Temerity

"Nasutoceratops is the exclusive, and feeds into Testacornibus. I don't use Testacornibus, and it can be slow to start, but it'll be handy in this swap meta. Besides, I'm going to level Nasutoceratops for advantage (tournaments). Compy2 is new, but it's a local and we've had plenty of time to hoard with last week." - MonkeyButt

"Comp G2, like last week, for stockpiling a hybrid and for an advantage option" -SonicNTGD

SONORA!!!!!!!! That is exactly what I yelled when I first saw the calendar. This is our A#1 recommendation for Epic darting this week. It is Event Exclusive and Skoona is absolutely amazing in arena. It can also substitute for Maxima in many raid strategies.

We can understand if you find the others appealing, though many players are giving Tryk the Mags treatment and sending it to the bench. We'd definitely suggest Kentro over TRex due to being park locked if Tryk is your ultimate goal. Of course we've said it before and will say it again, you can also never have enough TRex. It takes thousands to max the whole line. In this case, however, we can not advocate this as a choice over an Event Exclusive. Run a giga or two, and you're likely to draw at least one TRex in that time. The same can not be said for Sonora (until we get it back in hybrid pursuit next week).

Our Discord community agrees Sonora looks to be the way to go. There is still some love for Kentro and TRex, though. Here are some more reasons for choices:

"Some Sono for Skoona, some TRex for Indom, and TRex completely for my alt since I consider it for the non-hybrid team" - SonicNTGD

"I'm going Sono. Would like to finish Skoona for whenever I decide I want an arena team." - Temerity

Strike Events and Trials will also be Dinosaurs Week themed, and you can win the same Common, Rare, and Epic creatures featured at the event drops for successful completion.

We have multiple dino specific strikes this week again, this seems to be the new normal. On Wednesday, we will have a Spino strike. The strike on Friday will feature the first Dakotaraptor! Sunday will feature the usual Epic Trial. Finally, we've got the regularly scheduled Boost Strikes on Tuesday (Attack), Thursday (HP), and Saturday (Speed).

There is a basic scent strike on Monday, and the themed scent on Thursday will be Carnivorous Therapod. This can draw any of the following creatures when activated:

This week continues the do over of the Skoonasaurus pursuit, so keep your eyes out for the Common Scolosaurus!

May continues on with our daily award being the Event Exclusive, Diplodocus! Do everything you can not to miss out on collecting this super valuable DNA every day. The arena season reward will be Tuoj! 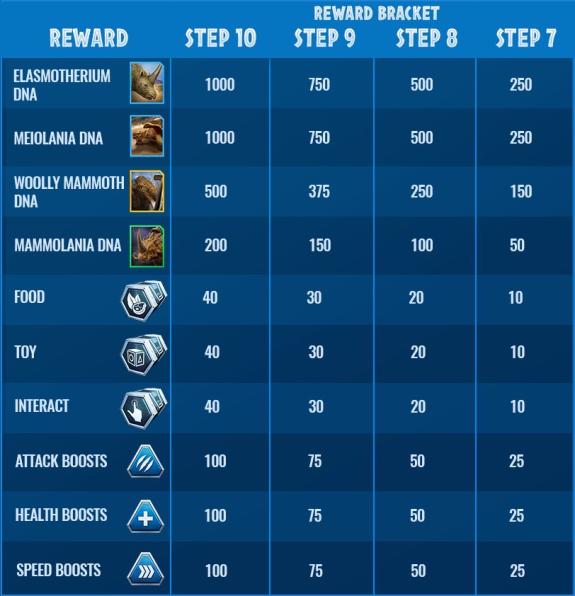 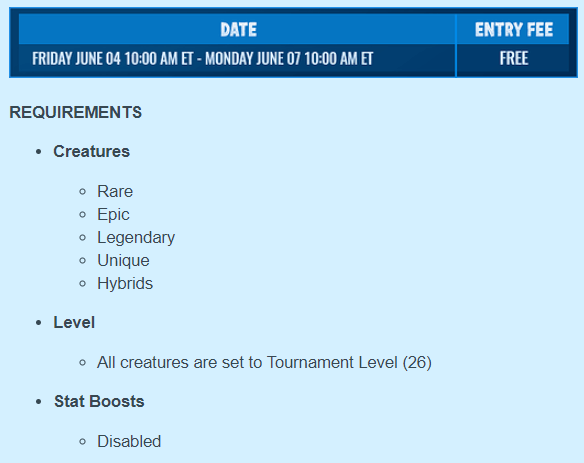 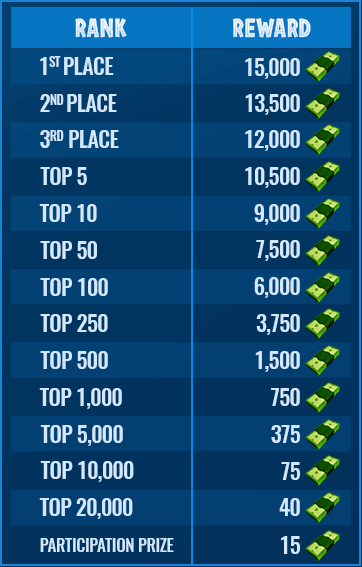 It's tough to follow up a week like last week, and we feel Ludia has delivered the best they could. We always love and look forward to opportunity at new and/or exclusive attempts. New for 2021, we are going to reach out for more community input on these weekly event roundups. Join our Discord Server and let us know what you're darting and why! We look forward to your input and hope to see you on there!