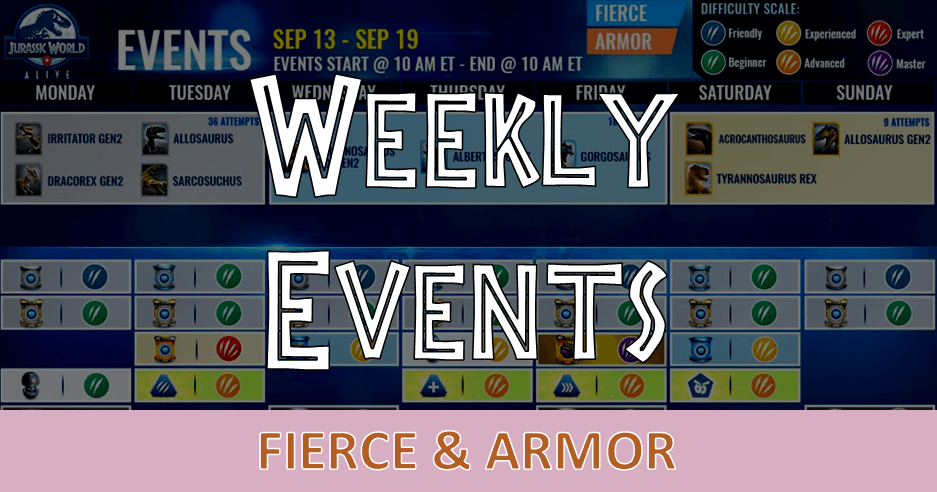 Explorers! We move on from a week of spelling lessons to our favorite Fierce creatures with a side of Armor. We had both of these themes featured together back in May. Let's go over what we said then, what our Discord community is thinking, what we'll recommend to dart, and everything else you need to know. 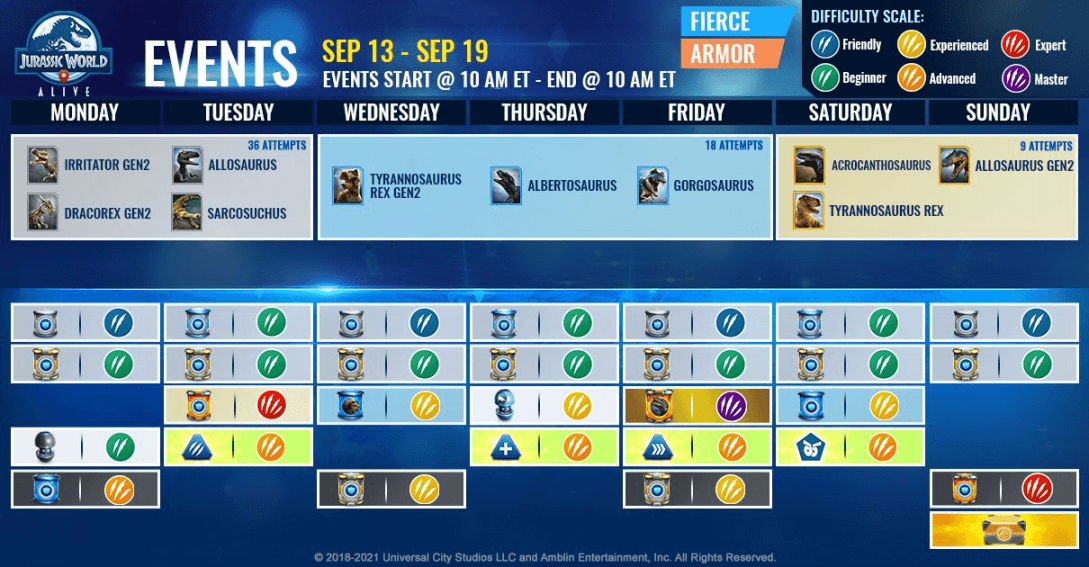 Last time we had this event, we were given Purussaurus Gen 2 in lieu of Dracorex Gen 2. What a great modification, as DG2 has become one of the hottest commodities with the addition of the Phorurex hybrid. Despite being available everywhere, all the time, this is the one we most suggest you target. At 2,000 per fuse, you're going to need over 300,000 DNA to take the new bird from level 21 to 30. Calculate even more if your DG2 isn't level 20 yet.  We like Sarco as your second choice being battle exclusive and with Rixis still being a solid force even after the nerf a couple updates ago. From there, we'd go with Irritator Gen 2 for being day of the week locked and feeding a great hybrid in Thyla. Allo are very prevalent during its spawn times, but if you are working on Allison or Thor, you will need quite a lot and perhaps that could make this one your choice. Our Discord community is all over Draco2 with none of the others even coming close in our voting poll.

There have been a couple changes here since our last Fierce event with Albert & Gorgo replacing Andrew & Dime. We view this as another very nice change, though we'd have preferred replacing TRex2 over Andrew. Then again, that would make this an even tougher choice. Our top recommendation goes to Albert being Event Exclusive, the newest of the bunch, and perhaps the most frightening base Rare in the game. There isn't currently a hybrid, but any chance we have to stock up on this DNA is a great one. We can see appeal in Gorgo with SR3 being a top arena choice. This one is also only available one day of the week but does seem to be one that spawns quite frequently in its nest (Restaurants). TRex2 isn't an awful choice based on all the hybrids it's responsible for. When compared to our other two options and considering it's a global spawn, we really would suggest you focus your efforts on one or both of the other choices.

The majority of those who voted in our Discord poll are targeting Albert with the other two coming in about evenly split.

Last time we had Fierce, we were dealt Baryonyx in place of TRex. This is a change we don't like as much as the others, but at least it helps ease the decision. Based on the Event Exclusivity, we recommend Allo2 as your top choice. We do also like Acro for its strong hybrid and could make a solid case for making this your choice. TRex isn't the optimal target, but it does feed a number of hybrids for which you'll need tons of DNA to work on.

Our Discord community looks to be buying in to the rule of exclusivity as most of those who answered our poll will be using their attempts on Allo2.

Strike Events & Trials will be Armor themed and will reward the following with successful completion:

We will have two dinosaur specific strikes this week. Wednesday will feature Doedicurus, and an Epic strike on Friday will feature Indominus Rex Gen 2! We've also got the regularly scheduled Boost Strikes on Tuesday (Attack), Thursday (HP), and Saturday (Speed).

There is a basic scent strike on Monday, and the themed scent on Thursday is Ankylosauridae This can draw the following creatures while activated:

This week will conclude the Andrewtodon pursuit with Glyptodon.

We charge on the month of September with our daily reward being Acrocanthosaurus while the arena reward is the extremely valuable, event exclusive, Woolly Rhino.

Week 2 of the Spinoconstrictor Alliance Championships will be Epic Unique (All) Advantage tournament for Dilophosaurus Gen 2 & Spinosaurus DNA! 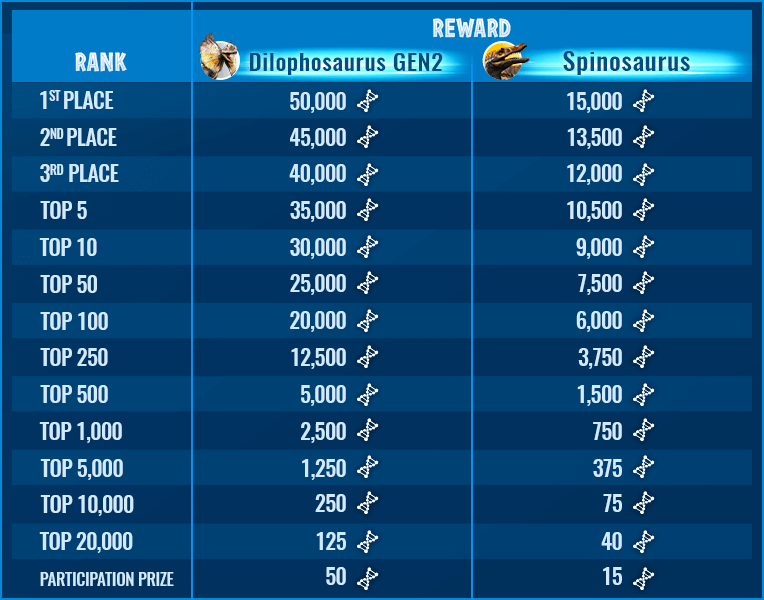 Last week felt a little nutty with minimal days for many attempts, so it will be nice to feel a little more relaxed. New for 2021, we are going to reach out for more community input on these weekly event roundups. Come join up and let us know what you plan to dart! We look forward to your input and hope to see you on there!

Kelly resides in Scottsdale, AZ, just living the dream. A JWA player since about day one, she spends much time hunting in the park outside her home and thrives in leading the great folks of Kelliance.