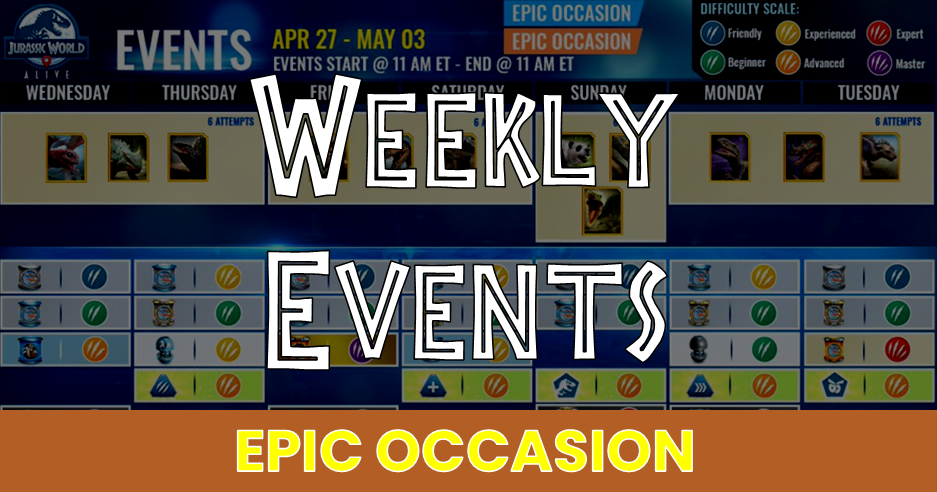 Explorers! We move off of Spring Event on to a focus of Epics with Epic Occasion! Let's get to it and talk about our recommendations of what to dart before we break down the rest this week has to offer! 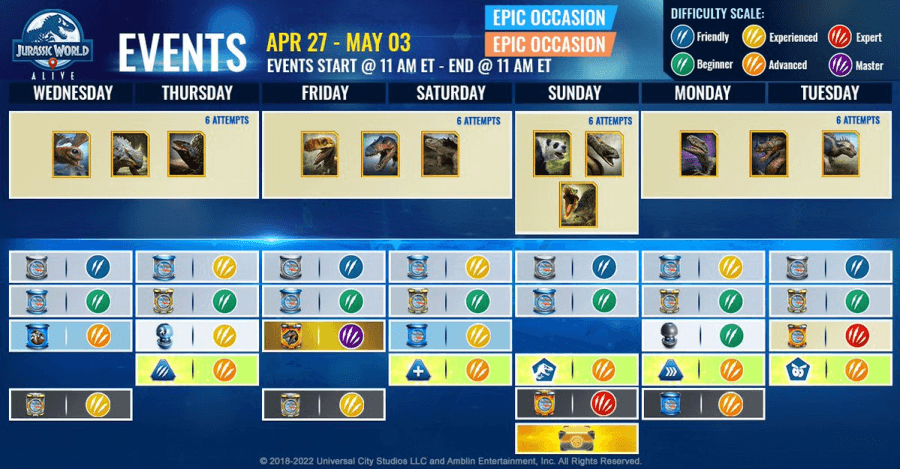 This week starts with a bang with two Event Exclusives and one Park spawn. We're also a little bummed we only get 6 attempts instead of what would usually be 9. But that doesn't mean we aren't grateful for a week of Epic choices!

If you are wanting to prioritize working on your arena team, it's really a toss up between Bumpy & Edaph. ALux and ACevia are both top tier Arena forces. If you don't have easy access to parks, that's a good reason to choose Edaph. Chances are you've looked passed this one in past events and could use a bunch for the newest Fierce darling. We haven't seen much of Ardontognathus in battle, but we also do like this as an option based on exclusivity. Really, you can't go wrong with any of these choices.

As a base Epic, we have seen Anurog perform very well in qualifying tournaments. If you are looking at the hybrids, you probably recently recall "Bumpymoloch" was a must have in this past weekend's tournament. And if you reach back further, you'll recall Ardontognathus performed very well when it first appeared. Here we'd flip a coin between Anurog and Bumpy or spread our attempts over both.

None of these have made much for appearances in raid strategies.

These are really excellent choices, and we lean toward the two Event Exclusives even if you do have a challenge accessing parks.

All of these are responsible for great arena options, so we'd suggested basing it on Exclusivity. That would make an order of Allo2, Raja, Carbo. Of course you could also base it on which one you feel you ultimately need more of. It's going to cost a TON of Carbo if you want to build a big bear. The same can be said for Raja if the other fusible Apex, ALux, is what you seek.

Allo2 is definitely your top Epic with regards to their own rarity in qualifying tournaments. When looking at Legendary hybrids, Allo2 seems much more prevalent than Carbotoceratops. As far as Uniques go, Dio is probably the one we see on more qualifying tournament teams than the others. Over all in this category, we'd say Allo2 is your top option.

If help building a raid creature is your main goal, you'll target Raja here to use toward Dio which can be found in very many Unique & Apex raid strategies. It is typically viable at a fairly low and unboosted level as well.

Overall, we like Allo2 for its exclusivity, but we also like the other two for their hybrids. You really can't go wrong with whichever your choice is,

Boa is going to ultimately get you your best Arena creature here, though we can see Bary doing the same depending on what arena you are in. We'd give Boa the edge due to being Event Exclusive and having the ultimate better hybrid.

All 3 of these perform fantastic among their rarity, so we'd have to rank them on Exclusivity (Panda/Boa, Bary). You could also consider your other Epic options and figure out which might provide the best synergy among them. With regards to hybrids, we like Tryos a touch better than Dilophoboa but find it difficult to suggest a wild spawn over either Event Exclusive.

Bary is the only one responsible for a raid creature, the very oft used Tryos. This will be your target if you are working to enhance your raid offerings.

We like Panda as the top choice overall. It's Event Exclusive and has been around way less time than the other options.

Our final round is pretty neat as all 3 are hybrids, and we love to save the DNA and coins it costs to fuse!

Indom2 will nab you the best end game hybrid in Indotaurus and save you some of that day locked Carno needed to fuse it. However, this one can be found in the wild if you're lucky, whereas the other two can not. Next, we like "Junk Boa" for its recently buffed hybrid. This one also requires an Event Exclusive component in Titanoboa. Thyla is probably the most usable in the arena, but this cat is a little easier to make with Marsupial Lion available in battle incubators.

All three of these are seen often in qualifying tournaments and serve very different purposes. Like we suggested with Day 3, you might consider your other Epic hybrids you have built for tournament and try to choose the one of these that synergizes best with those.

Both Indom2 and Thyla make their appearances in some raid strategies, though we see Thyla much more often. Either one would make a fine addition to your stable of raid creatures.

This is pretty tough to choose, but we would rank these in the order of Indom2, MBoa, Thyla. It's really very close, though,

Strike Events & Trials will also be Epic Occasion themed and can reward any of the Epics found at Event Supply Drops as well as the following Rares & Commons:

For the first time in awhile, we have two dinosaur specific strikes this week, a Rodrigues Solitaire strike on Wednesday, and an Allosaurus Gen 2 strike on Friday. We've also got the Boost Strikes on Thursday (Attack), Saturday (HP), and Monday (Speed) and a Badge strike Sunday and an Emote strike Tuesday.

We have a basic scent strike on Monday, and prior to that will be a Carnivorous Theropod scent on Thursday. This scent can draw the following creatures when activated:

We are hoping we are back to our standard treasure chase, where we have the opportunity to open chests each hour to collect up to 25,000 total coins. These chests also reset at 8pm Eastern, providing another opportunity to acquire 25,000 coins by 11am Easetern Monday morning.

This week continues the Phorurex pursuit with the Battle Exclusive Epic, Maiasaura!

This season continues with Titanoboa as our daily reward and arena season reward, the Event Exclusive Bumpy!

The final week of Compsocaulus Alliance Championships will be Rare/Epic/Legendary (All with Exceptions below) Advantage tournament for Compsocaulus DNA! 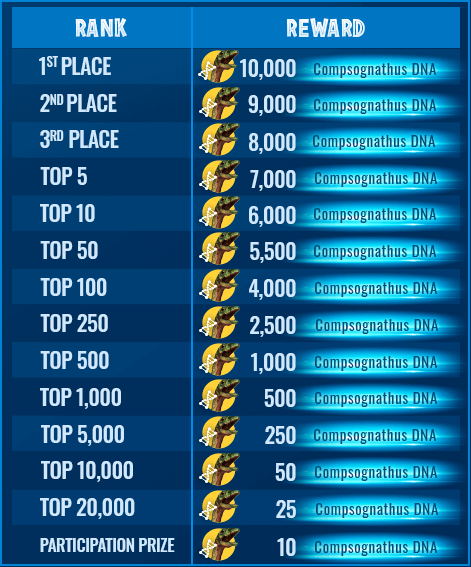 Epic Occasion is full of really great options that make choosing difficult. We're bonus excited to see a Rodrigues Solitaire strike, making the week feel truly Epic. What do you think of this week's choices? Come join our Discord and let us know what you plan to dart! We look forward to your input and hope to see you on there!